Aamir Khan and his ‘Laal Singh Chaddha’ team have been accused of polluting a village in the region of Kashmir.

“This is the kind of havoc the crew is creating"

Aamir Khan and the entire Laal Singh Chaddha crew have come under fire for allegedly polluting a village.

The film is currently being shot in the village of Wakha in Ladakh ahead of its Christmas 2021 release.

However, the team has been criticised for allegedly polluting the village.

A Twitter user by the name of Jigmat Ladakhi shared a video showing litter that has been left in the village by the film crew.

Plastic bottles and empty carrier bags were seen on the ground.

He wrote: “This is the gift Bollywood star Aamir Khan’s upcoming movie Laal Singh Chaddha has left for the villagers of Wakha in Ladakh.

“Aamir Khan himself talks big about environmental cleanliness at Satyamev Jayate but this is what happens when it comes to himself.”

“This is the kind of havoc the crew is creating with the undisturbed environment.

This is the gift Bollywood star Amir Khan's upcoming movie Lal Singh Chada has left for the villagers of Wakha in Ladakh.
Amir Khan himself talks big about environmental cleanliness at Satyamev Jayate but this is what happens when it comes to himself. pic.twitter.com/exCE3bGHyB

After seeing the video, some netizens were not happy with the film crew’s behaviour.

One person expressed their disappointment:

“Please, don’t neglect this irresponsibility done by the members of Laal Singh Chaddha movie makers along with Aamir Khan!

“They should be fined and esteemed members of Ladakh should take strict actions!”

Another person claimed that in 2006, Aamir Khan and the Rang De Basanti team left the area a mess after filming.

The user wrote: “Rang De Basanti came in 2006 and after that movie, our Nahargarh Wildlife Sanctuary is like a dump yard for beer bottles.

“Our team gathered 3 tons broken bottles from 2 areas of the sanctuary.”

A third person said: “Shouldn’t the production house be fined?

“Don’t they take some security deposit from them before allowing shooting?”

However, some social media users pointed out that filming is still going on and that the crew still has not left the location.

One netizen said: “For your information, the shooting schedule there is still going on and they haven’t left the place yet.

“Get your facts right before you blabber.”

Another person stated: “The film team is there till the end of August.

“Twitter troublemakers look for any weak opportunity. All film teams clean up before they go.

“In mid-2000 Aamir and Lagaan team returned to villagers in Gujarat their arable land perfectly, used through the 6-month shoot.”

A picture from the film set recently went viral. 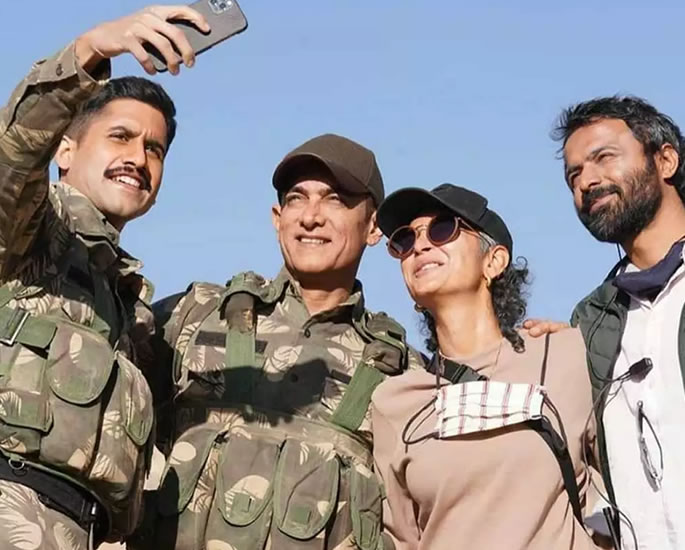 Naga will make his Bollywood debut in the film.

Laal Singh Chaddha is an adaptation of the Hollywood classic Forrest Gump.

It also stars Kareena Kapoor Khan and is also set to have cameos by Shah Rukh Khan and Salman Khan.

Dhiren is a journalism graduate with a passion for gaming, watching films and sports. He also enjoys cooking from time to time. His motto is to “Live life one day at a time.”
Mahira Khan speaks about Anxiety Battle
Pooja Bhatt reveals why She didn’t cover up Alcohol Abuse