Kartik Aaryan & Kriti Sanon have Fun on Koffee with Karan 6

An episode of Koffee with Karan 6 featuring Kartik Aaryan and Kriti Sanon is one of the best. The ‘Luka Chuppi’ stars make some interesting revelations.

During season 6 of Koffee with Karan, stars of Luka Chuppi Kartik Aaryan and Kriti Sanon came on the popular show for the first time.

With Karan Johar at the helm, Aaryan and Sanon were very humorous and open, along with providing full entertainment on the show.

As season 6 possibly coming to a finish soon, viewers were in for a treat with this particular episode.

During the show, Karthik and Kriti made disclosures about their personal and professional life.

They also made comments about other actors, along with reflecting on the notion of nepotism.

The pair made some sensational revelations, with Karan asking his two fellow K’s some hilarious questions. 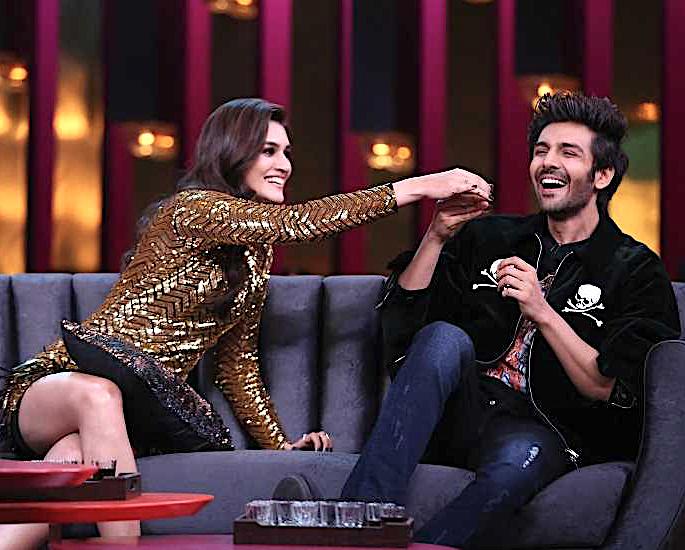 DESIblitz highlights the episode, covering all the major talking points:

From Humble Beginnings to the Limelight

Coming from a non-filmy background, the story or Kartik Aaryan making it big in Bollywood is impressive.

Aaryan a popular young actor did share the fact that he was sharing an apartment with 12 people in two rooms during his early days.

He eventually got a breakthrough with Pyar Ka Punchnama (2011) after unexpectedly finding his way through a Mumbai Engineering College. This allowed him to get maximum auditions in the city.

Why Kartik did not ask Sara Ali Khan out?

Karan Johar put Kartik on the spot, asking him the question: “Are you interested in Sara Ali Khan.”

Sitting next to him on the famous couch, Kriti said: “Have you sent him your address.”

With a blushing look, in reply, Aaryan admitted he needs more money to match her standards.

His response was in reference to the joke made by Sara’s father Saif Ali Khan that any man with the financial capacity can ‘take her.’

He also mentions a film date with Ananya Panday and making it clear that Shraddha Kapoor was nothing more than a friend.

Kriti Sanon on her Career

Kriti Sanon revealing her story, said she was not very familiar with the world of glamour.

During the time when she was studying engineering, Sanon took a few snaps of herself, uploading them to win a modelling competition.

As a result of winning the contest, famous photographer Daboo Ratnani made a portfolio for her. Since then she has had a positive presence in the industry.

Speaking about Bareilly Ki Barfi (2017) as somewhat of a turning point, she expresses:

“I was so happy when it (Bareilly ki Barfi) did well and it was so strange that after that I only got small-town roles which did feel like an achievement.

Star World posted a video tweet on Twitter, where Sanon reflects on being a gifted fresh face:

.@KritiSanon sheds some light on how she became one of the most talented newcomers in the industry! #KoffeeWithKaran #KoffeeWithKartik #KoffeeWithKriti pic.twitter.com/8afsIYLMi6

Sanon initially told that there was nothing going on between her and Sushant Singh Rajput. Kriti said she was good friends with him and left it at that.

But after taking a coffee shot in a later segment, Kriti goes on to say that she was not telling the truth on the couch.

Karan tells that actor Aditya Roy Kapoor found Kriti Sanon very cute. Despite even setting them up, nothing did materialise so far.

When asked the question about nepotism, both actors were on the same page stating it was much difficult to make it big in comparison to the likes of Varun Dhawan, Alia Bhatt, Ranbir Kapoor and Sara Ali Khan.

They felt it was far easier for actors with a filmy connection to get the recognition.

However, they mentioned that they had no ill feeling towards anyone. 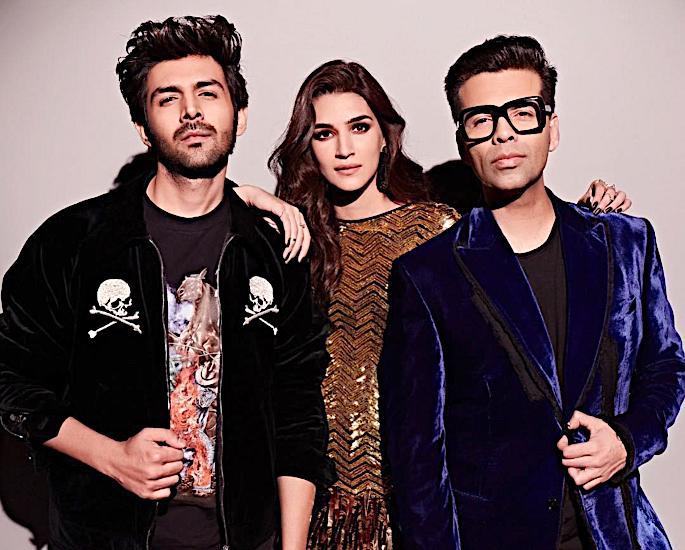 But he did confess of wanting to star with Sara Ali Khan.

Johar then cheekily quizzed him about his thoughts on co-starring with both Sara and Ananya in one movie.

Kriti interrupted and asserted that it would be called ‘Love Aaj Idhar Udhar.’

The alert and amusing Karthik won the rapid fire round, with many more interesting points shared by the two actors.

With the end of the show looming, it has been announced that the young cast of Student of the Year 2 (2019) will be next guests on Koffee with Karan 6.

Tiger Shroff, Ananya Panday and Tara Sutaria who are the students of Karan’s own production will make their debut on the show.

Ananya went on Instagram and posted a picture of the actors alongside Johar, captioning it:

“Koffee has never tasted better ???? A dream come true for me!!! Thank you so much @karanjohar for having us ???? @tigerjackieshroff @tarasutaria__#SOTY2 #TheStudents #KoffeeWithKaran” 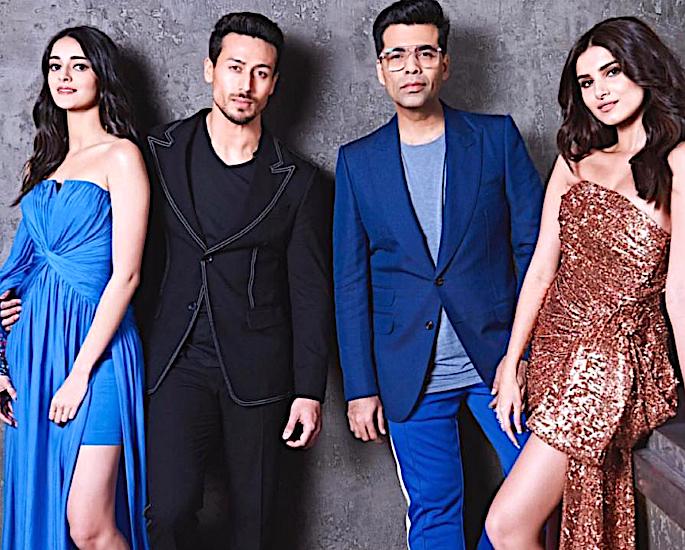 This should be another cracking show with the young trio.

Meanwhile, do watch the fun-filled episode with Kartik Aaryan and Kriti Sanon. Koffee with Karan 6 broadcasts every Sunday on Star World at 9 pm IST.