Following Jiah Khan’s suicide on June 3, 2013, a suicide note was uncovered by her mother Rabiya which told the real reason for her death.

"I've never given so much of myself to someone or cared so much."

When Jiah Khan committed suicide on June 3, 2013 at her Juhu residence by hanging herself from a ceiling fan in her bedroom, the whole world was shocked!

This stunning, young, talented actress with so much potential, could it be true? Unfortunately it was.

Jiah’s funeral took place on June 5, where she was buried in Mumbai at the Santa Cruz graveyard.

However, recently Jiah’s mother, Rabiya Khan, made an astonishing discovery while she was looking in her daughter’s wallet box for poems written by Jiah to read at her prayer meet, held on June 8, at Vile Parle Medical Club. 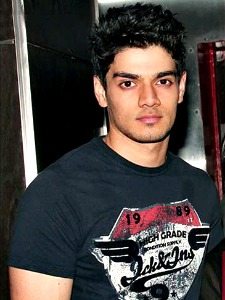 What Rabiya came across, no one would have guessed, was six pages of a broken hearted woman explaining why she took her life. It was addressed to her boyfriend, Suraj Pancholi.

Jiah’s mother decided to share this letter to the media, to show it wasn’t the Industry which made her daughter commit suicide but it was due to Suraj her boyfriend.

In her letter, Jiah wrote:

“I don’t know how to say this to you but I might as well now as I have nothing to lose. I’ve already lost everything. If you’re reading this I might have already left or about to leave. I am broken inside.

“You may not have known this but you affected me deeply to a point where I lost myself in loving you. Yet you tortured me everyday. These days I see no light I wake up not wanting to wake up.

“There was a time I saw my life with you, a future with you. But you shattered my dreams. I feel dead inside. I’ve never given so much of myself to someone or cared so much. 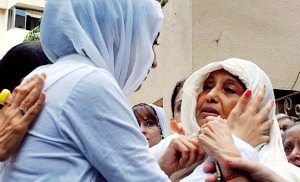 “You returned my love with cheating and lies. It didn’t matter how many gifts I gave you or how beautiful I looked for you.

“I was scared of getting pregnant but I gave myself completely the pain you have caused me everyday has destroyed every bit of me, destroyed my soul.

“I can’t eat or sleep or think or function. I am running away from everything. The career is not even worth it anymore.”

“All I want now is to go to sleep and never wake up again. I am nothing. I had everything. I felt so alone even while with you. You made me feel alone and vulnerable. I am so much more than this.” 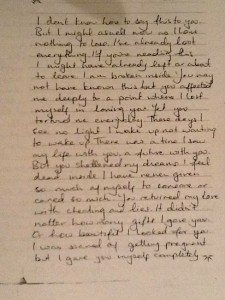 Amitabh Bachchan on her death, stated: “I am very sad and also worried. It feels strange to talk about it. Sometimes there are situations when someone gets sad and depressed.

“They come with dreams and when it is not fulfilled, they give up. I want to say that to end your life like this is not good. I am deeply upset with what has happened with Jiah Khan,” he said.

Ritesh Deshmukh tweeted “Worked with Jiah in Housefull 2 – she was full of life and had an incredible sense of humour. She was a friend and we will miss her. I am deeply saddened.”

According to the Times of India, Suraj Pancholi has been arrested in suspicion of abetting her suicide.

The 21 year old, who is the son of Aditya Pancholi and Zarina Wahab, was arrested on June 11 in Mumbai.

Authorities have already state that Suraj wasn’t present when Jiah hung herself in her Mumbai home. However Jiah’s mother has openly blamed Suraj for ruining his daughter’s life and leading her to take her own life. 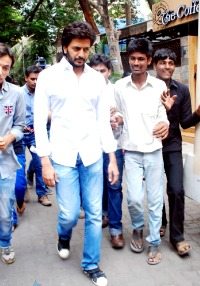 Police have stated that two nights prior to the day Khan killed herself, Suraj stayed with her. He was also the last person she spoke to over the phone where they had an argument.

Suraj’s mother, Zarina, has since protested the accusations of her son’s arrest:

“Our son is being made into a scapegoat . My husband Aditya and I are grieving for Jiah but our son was not responsible for her death. Jiah’s soul cannot rest in peace until these unsavoury controversies and lies about my son die down,” she said.

The news however, has created much outcry amongst the general public who wish Jiah get the justice they believe she deserves. Of course, no man or woman should have to go through such pain and hurt to lead them to such depression and despair.

It is hoped, that this news will open up people’s eyes, and raise awareness of the issues of depression and suicide among people in India where they can go and seek professional care and help.

Anisha has lived and breathed Bollywood since she was young! She loves everything Desi and would like to become an actress in the future. Her life motto is " Zindagi nahin milti hai baar baar, toh khul ke jio aur haso - umar beeth jaati hai..."
Ankur Arora Murder Case ~ Review
Fukrey stars Ali Fazal and Priya Anand