A video of South Indian film actor Jayasurya getting into an accident while shooting for his upcoming film has gone viral on social media.

Jayasurya plays the role of an alcoholic in the upcoming film.

A shocking video featuring South Indian cinema actor Jayasurya has gone viral. The viral video shows the Malayalam film actor using a power tiller and it results in an accident.

The incident occurred while Jayasurya was shooting for his upcoming film Vellam: The Essential Drink.

The actor insisted on doing the scene himself and opted out of using a stunt double as he wanted the scene to retain originality.

Jayasurya was in for a shock when the power tiller he was operating went out of control.

The cast and crew of the Malayalam film immediately swept into action and saved Jayasurya from getting injured. 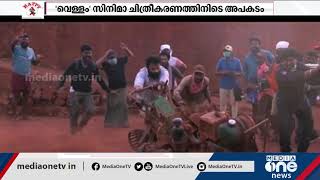 Jayasurya plays the role of an alcoholic in the upcoming film.

The actor has been seen sporting wrinkled shirts and dhotis and holding alcohol bottles in the trailer and posters of the film.

Vellam is directed by Prajesh Sen, who made his directorial debut with Captain (2018), which also featured Jayasurya.

Vellam is produced by Manu P Nair and John Kudiyanmala under the banner Friendly Productions LLP and is set to be released in 2021.

Samyukta Menon, who debuted in Malayalam cinema through the Tovino Thomas movie Theevandi (2018), is the female lead of Vellam.

It is the first time that Jayasurya and Samyukta have starred opposite each other in a film.

Jayasurya is also currently shooting for another upcoming Malayalam film Sunny, which will be his 100th film.

The Malayalam actor has had a long and storied career in the South Indian film industry.

He kickstarted his career as a mimicry artist and hosted a few television shows on local Malayalam channels.

Jayasurya’s first big breakthrough was with Malayalam film Oomappenninu Uriyadappayyan (2002), in which he played the character of a mute man.

The actor rose to great prominence after the success of his much-acclaimed comedy films Swapnakkoodu (2003), Pulival Kalyanam (2003) and Chathikkatha Chanthu (2004).

Jayasurya won the Best Supporting Actor Award for his performance in the widely appreciated film, Apothecary (2014) at the 62nd Filmfare Awards South.

The actor also received a Special Mention at the 63rd National Film Awards for his performances in the films Su… Su… Sudhi Vathmeekam (2015) and Bollywood film Lukka Chuppi (2019).

Akanksha is a media graduate, currently pursuing a postgraduate in Journalism. Her passions include current affairs and trends, TV and films, as well as travelling. Her life motto is 'Better an oops than a what if'.
Kareena Kapoor reveals Why She was Sent to Boarding School
India’s Republic TV fined £20,000 by Ofcom