A video of Shahrukh Khan’s daughter Suhana acting in the play goes viral. Watch her play Cinderella with a hilarious twist.

Suhana moves around the stage confidently

Acting seems to run in the family as a video of SRK’s daughter Suhana acting in a play goes viral.

Bollywood star Shahrukh Khan has been acting in Bollywood movies since 1992. Some of his biggest blockbusters include Happy New Year (2014), Om Shanti Om (2007) and more recently Raees (2017).

Does Shahrukh’s 16-year-old daughter Suhana show potential to live up to her father’s status and follow in his footsteps?

A video of Suhana Khan goes viral as it shows her acting in a play as Cinderella.

She is shown very animated, speaking clearly and loudly. In true Cinderella style, Suhana falls to the floor in distress and bows her head. She moves around the big stage confidently in front of a backdrop of an old-fashioned house.

In a hilarious twist, Suhana address the narrator and says: “I think I know my own story thank you!”

The sassy 16-year-old actress wears a long blue dress and black shawl. Her hair is styled half braided and Suhana wears a bold red lipstick.

Viewers are quick to comment on her brilliant acting talents. Comments on the video include: “Lovely acting” and “Talented just like your father”.

“Outstanding… Beautiful voice Suhana. You will create a new era of act.”

However, some people are quick to criticise Suhana’s performance in the video. Comments include “No grace at all, only loud”, “overacting” and “need more practising.” All the big stars have haters though right?

Will we see Suhana Khan in a Bollywood movie anytime soon?

Shahrukh has previously mentioned how he does not want his children, Aryan and Suhana, to go into showbiz until they have finished their education.

One of the reasons Shahrukh may be wary about his children choosing to go into acting is dealing with fame and living in the public eye. 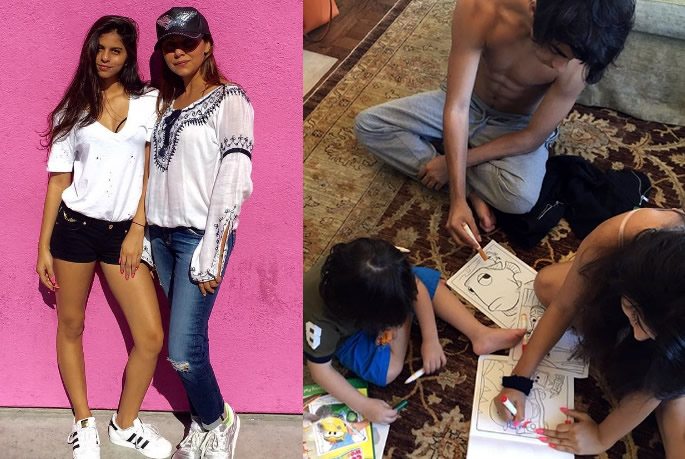 But the star has been hugely supportive of his daughter Suhana’s interest in acting and is hoping to one day see her as one of the leading heroines of Bollywood.

In a 2014 interview on The Anupam Kher Show, SRK mentioned that he was a writing a book on tips to be an actor for Suhana to read once she had finished school.

King Khan recently said in an interview with AIB how he dislikes people stereotyping Bollywood actors as arrogant people where money has gone to their heads.

SRK also mentions in the interview how Amitabh Bachchan gave him some advice about fame early on in his career.

The Bollywood legend warned Shahrukh to watch his behaviour in front of cameras. He says: “Whatever you do will be wrong.”

Karan Johar has often said he would launch Shahrukh’s son Aryan. Shahrukh has said that if his children do choose to pursue acting, they should do something that will take Indian cinema forward.

The father of three says he will be happy with whatever career choices his children decide to do.

With Suhana lighting up the stage in the viral video, we can easily see her following in her father’s acting footsteps very soon.