Is the Nude Selfie Culture in India Out of Control?

Is the nude selfie culture in India spiralling out of control? With the advent of the internet and smartphones, we take a look at its growth and impact.

"Self- esteem plays a big role in teenagers behaving strangely."

Smartphones with cameras are becoming centric to the lifestyle of most Indians.

One use for many phones is that of taking selfies. However, when it comes to taking personal and intimate photos, the nude selfie culture in India is skyrocketing.

A simple Google search will return a plethora of results related to this subject, especially, nude selfie images of young Indian women. Highlighting its growth over the years.

Many Indian teenagers are sexting without anyone such as friends and family knowing. Part of this activity also involves sending nude selfies, often referred to as ‘nudes’.

In the heat of the moment, the ritual of taking nude selfies and sending them to the other is fast becoming a way of seeking acceptance. Especially, for young women.

Such scenarios have resulted in women especially being threatened by their male partners and ex-boyfriends with the public release of the intimate images. Thus, leaving them scared, extorted, ashamed and even ending their own lives.

DESIblitz takes a look at how the nude selfie culture in India has grown and its impact on individuals and the country.

Why is it Growing? 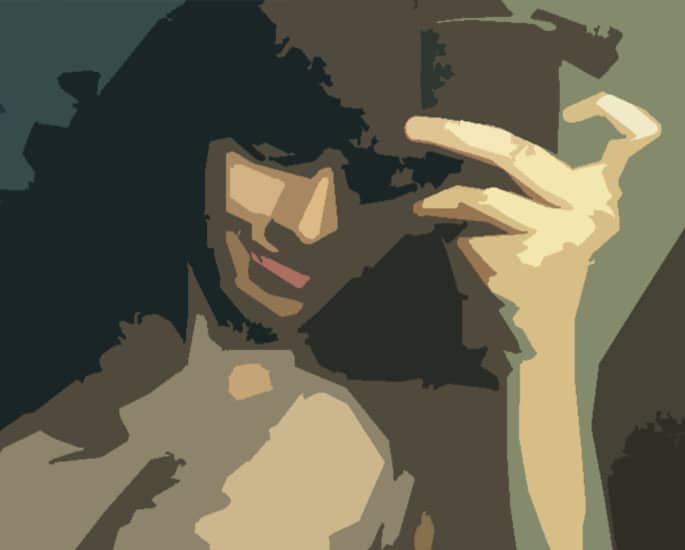 How relationships start and dating happens has completely changed due to the internet and smartphones. Most people will opt for often meeting someone online via an app or website.

This is no different in India. However, for a country which was once very ‘sexually shy’ and ‘culturally oppressed,’ it is fast becoming a catalyst for the opposite, due to it harnessing technology in a rapid manner.

Seeking attention and wanting to be liked and loved is a natural need for most people and it is very much so for Indians, who conduct their romances mostly in secret or with minimal people knowing.

Therefore, the nude selfie culture in India has grown due to the way Indians interact in intimate relationships, now using technology.

This digital activity has opened up so many ways for Indian teenagers to sexually express anything quickly to each other without anyone ‘really’ knowing.

In addition, the insecurities in both young Indian women and men, yearning acceptance by the other, also play a major role.

Some would say social media and media, in general, is to blame due to the way ‘perfection’ in bodies and personalities are portrayed.

The way women’s bodies are depicted especially are often unrealistic, this leads to many young Indian women developing these insecurities because they feel they ‘are not good enough’ or ‘do not look like her’.

“Self- esteem plays a big role in teenagers behaving strangely.”

Those who are not confident with their bodies or the way they look can take a huge toll on their lives, as Dr Malhotra explains:

“It disturbs the cost of life. The person may suffer from social anxiety, nightmares, depression and phobia.

“One could also be driven to suicidal thoughts and behaviour.

“One needs to evolve internally to cope with the pressure.”

Therefore, in the digital age, the use of ‘nudes’ has become a means of getting accepted in relationships for many young Indians. Especially, women.

Due to the way relationships happen in India, there are many that will never end up being ‘real’, therefore, the two parties may never meet. So, digital communication is the only means to express themselves which can often include ‘nudes’.

Young Indian women are, therefore, not refraining from quickly taking snaps of themselves on their phones in intimate poses just in underwear, topless or completely naked.

Be it they are coerced into doing so during a conversation, dared or they are doing it willingly themselves, the nude selfie culture in India is growing.

Victims or Self to Blame? 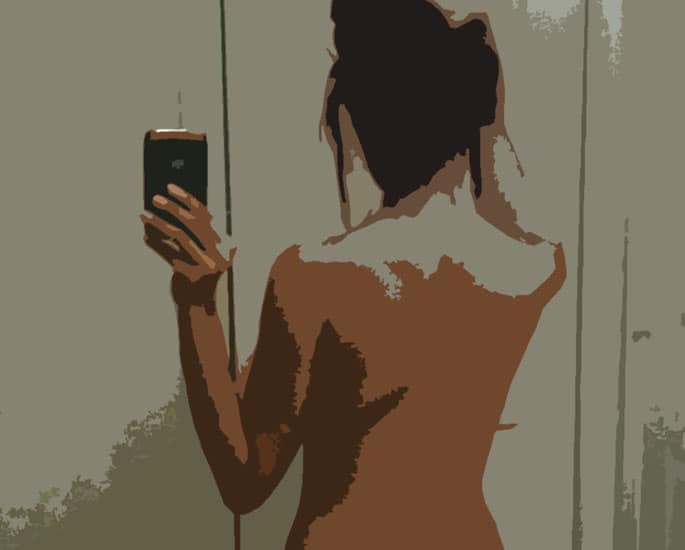 Reports of Indian women sending nudes due to pressure, emotional blackmail or ‘out of love’ are frequent.

However, in a country like India which is still patriarchal in many ways, women victims are often blamed for sending the nudes in the first place.

Therefore, the victims in these situations aren’t always seen as victims.

This is when criticism and shame on victims from older generations, parents, and grandparents is imposed rather than providing support.

Perhaps this is why many of the victims are still afraid to report anything in India, in fear of getting judged, or sadly, commit suicide due to the shame and loss of family honour.

One of the biggest worries for an individual sharing nude selfies is if family and relatives find out.

The initial and stereotypical reaction from Indian families is anger, not towards the accused but the victim for putting themselves in that situation, especially from parents.

Within the Indian culture, it’s imperative to ensure nothing happens to taint the family name. Therefore, it’s no revelation that Indian parents would attempt to keep situations and cases like this quiet.

It’s because of the pride in Indian families that these victims feel suicide is their only way of escaping the issue when it shouldn’t be.

This is one of the many reasons why victims are afraid to step forward and report it to authorities. Others include blackmail and exploitation by the perpetrators.

Exploitation of those who have sent nude selfies or have had nude images taken of them by force or them unknowingly is a major issue in India and it is growing.

Young girls, minors, and those from poor backgrounds are being threatened and exploited mostly.

“In 2016, [from] 696 cybercrime cases [that] were registered in the state, at least 114 were related to publication, transmission, obscene, sexually explicit contents in electronic form.”

“[Due to] easy access to the internet, nowadays criminals all over the world have latched onto the web and made it their new domain of crime.”

Therefore, a negative side effect of sending nude selfies is that of trust being broken by those of having access to them. In some cases, even without a victim knowing.

In India, this is on the rise with destructive social outcomes.

Another trend in India is that of ‘morphing’ images. Where faces of people are superimposed onto nude bodies. Especially, of young women, who are then turned into victims.

There are cases where say a young Indian woman will get coaxed into sending a semi-nude image, wearing underwear. Then, the recipient takes the face off the image and ‘morphs’ it onto another woman’s completely nude body, passing it off as the person who sent the original image.

Such images are then being used to blackmail and intimidate women into controlling relationships with sexual favours.

Although it’s common for the cases to be about women there are a few regarding men being the victims too.

As there was a case of a male officer that took his own life, his wife then proceeded to blame two other females and another male for blackmailing him.

Another case, according to The Times Of India, was of a man who had befriended another male from an LGBT website. They had eventually agreed to meet in a lodge when the victim was asked to undress.

That’s when another three men entered the room, tied the victim up and took pictures of his intimate areas against his will.

The victim was then blackmailed and told to pay Rs 40,000 if he didn’t comply then the images would be circulated on different sites.

The victim who was not named for legal reasons had been in a three-year-long relationship with Animesh Boxi.

Over time, the victim was said to have sent nude, explicit images of themselves to Boxi. However, the victim denied this.

Boxi had in fact taken the images from the victim’s mobile device and from then, he began blackmailing her.

Unfortunately, in many cases of this kind, the victims are always blackmailed and are coerced to stay in controlling relationships by the perpetrators.

If a victim disagrees, consequently, most of the time the images do end up being leaked online and shared.

Tamluk District Court in West Bengal found Animesh Boxi guilty of posting the said images to pornographic sites and sentenced him to five years imprisonment along with a fine Rs 9,000.

It’s reported that this case is one of the quickest court judgements to ever pass in the legal history of India.

Providing encouragement to those individuals who after taking nudes and sharing them with partners do have the support of the law. 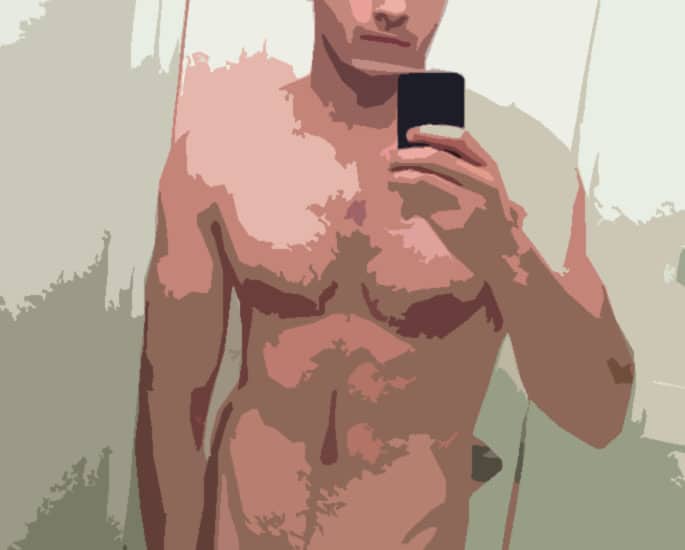 While there is no law stopping anyone from sending nude selfies, does the responsibility always lie with the person taking the image and sharing it in good faith, or the recipient?

India’s attitude towards women is evidently something that is yet to change. The misogyny in Indian society is still very prevalent, especially in rural areas and is hard to disregard.

Therefore, if Indian women send nude selfies to men, in most cases the women will always be seen as being in the wrong for doing so.

The criminal cases related to women are much higher than those for men. Indian women sharing nude images of men they received does not seem to have the same impact.

Besides, ‘dick pics’ rarely show faces or bodies of men. Whereas, women do tend to show much more in nude selfies, or are even coerced to do so.

Unfortunately, this gives some Indian males some kind of authority or odd right to then share the nude selfies or videos.

It’s these norms and values that young boys in India are surrounded by. It’s part of their primary and secondary socialisation to see women in a specific way, and it’s down to Indian society to change this.

The future with the advances in technology and smartphones is only going to get more difficult to police unless education and understanding of the new culture are improved in a country like India.

New generations, whilst being appreciative of news ways of communicating when it comes to intimacy, are also not going to always be trustworthy with images and videos in their possession.

Attitudes towards better awareness of the nude selfie culture in India is needed.

Stopping people from doing it with stricter laws is not the answer, as it will always take place in some way or manner.

The mischief and behaviour of youngsters during their adolescent period especially in India will always be a challenge and now faced with a rise in the nude selfie culture means protection and support is going to be needed a lot more than the stereotypical judgement to protect victims.

Roma likes to explore new ventures and thoroughly enjoys spending time with the people she loves. Her motto is "Do not look for healing at the feet of those who broke you” - Rupi Kaur.
British Asian Divorce: 5 Real Stories from Divorced Men
Indian Obsession with Erotica and Sex Stories