Is Ayyan Ali making a Musical Comeback after Five Years?

Pakistani model and singer Ayyan Ali, who was accused of money laundering in 2015 is set to make her musical comeback after 5 years.

"You all can enjoy my hard work that I’m putting out after 5 years."

Pakistani model and singer Ayyan Ali is set to make a comeback into the music industry five years after she was caught in a money laundering case.

In 2010, the 26-year-old singer began her modelling career and won the Best Female Emerging Model Award and was also nominated for four other Lux Style Awards.

Ayyan went on to win the Best Female Model award at the 2012 Pakistan Media Awards.

The model has worked with some of the biggest names in Pakistani fashion.

These include Gul Ahmed, Karma, Hassan Sheheryar Yasin just to name a few.

In July 2014, Ayyan released her track, ‘You and I’. However, it was not well received by critics.

However, on 14 March 2015, her life took a turn for the worse. Ayyan Ali was arrested by the Pakistan Airport Security Forces. She was convicted for money laundering.

However, Ayyan claimed that she was not aware of the customs rules and acquired the money through legal property sales.

Despite this claim, she was arrested in March 2015. She spent four months in Adiala Prison, Rawalpindi before being granted bail.

Taking to Twitter, Ayyan shared the news of her upcoming songs. Sharing a picture of herself by her Lamborghini and Range Rover, she wrote:

“Time to ride & double check my upcoming 7 tracks in one of my favourite oldest lambo.

“I just wanna make sure they sound awesome so you all can enjoy my hard work that I’m putting out after 5 years.

“Guys all 7 songs will be released in about one week or max two weeks time span.”

Time to ride & double check my upcoming 7 tracks in one of my favourite oldest lambo ? I just wanna make sure they sound awsome?So u all can enjoy my hard work that I m putting out after 5 years??Guys all 7 songs will be released in about one week or max two weeks time span?? pic.twitter.com/ClgfTjZ0Qn

Ever since her release, she kept a low-profile and returned to social in March 2020.

Previously, the singer also opened up about the money laundering case. Taking to Instagram, she wrote:

“Due to my health issues plus my mental health therapies I wasn’t able to lead my cases the way I wanted to before!

“I have changed my lawyers already and I’m changing my lawyers in all my other ongoing cases as well!

“All my cases now will be a fresh start! Before putting such big allegations on me like money laundering without any prove and making me go through these horrible situations from past 4 years I just want to ask something …” 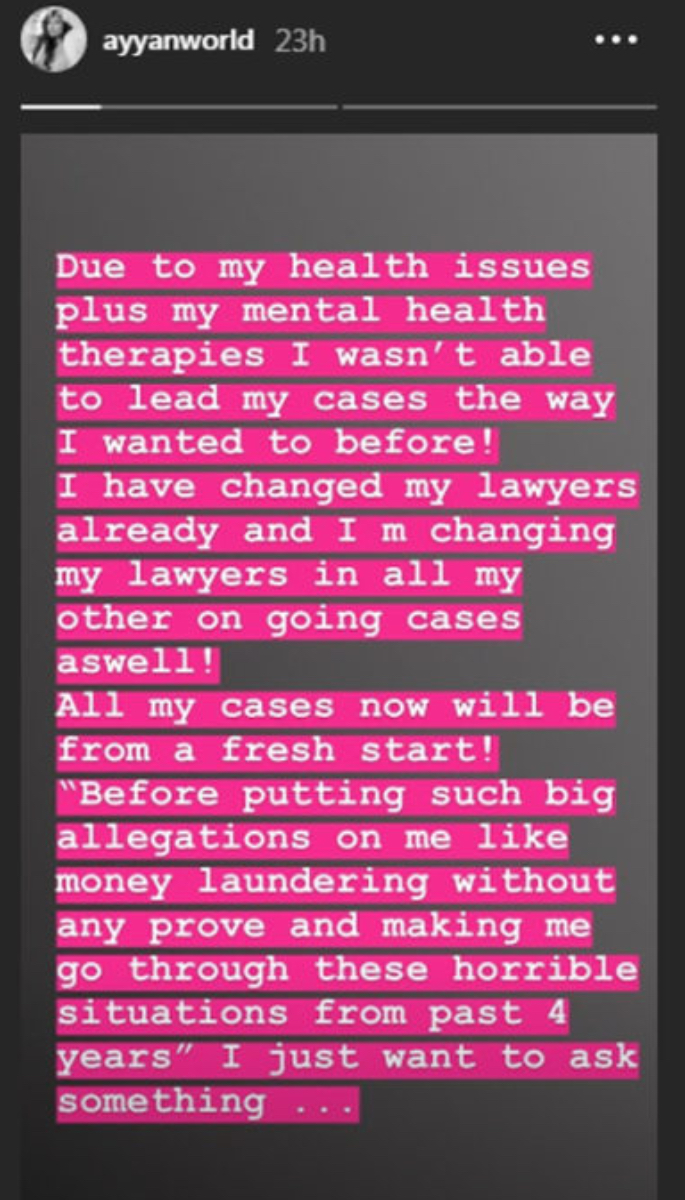 She continued to mention that she was not alone at the airport. She revealed:

“As per this airport video if the former president’s pa Mushtaq Ahmed & Rehman Malik’s brother Khalid Malik was there with me in Islamabad airport’s rawal lounge why both of them were not arrested.

“And why they are not in my fir why they were not the part of my investigation!

“My personal life has not done damage to my motherland Pakistan and the people of my country!

“People who thought it was a joke before saying whatever they wanted to utter from their mouths will get all their answers now!

“But my answers will make much more sense than their illogical fake rumours and allegations. 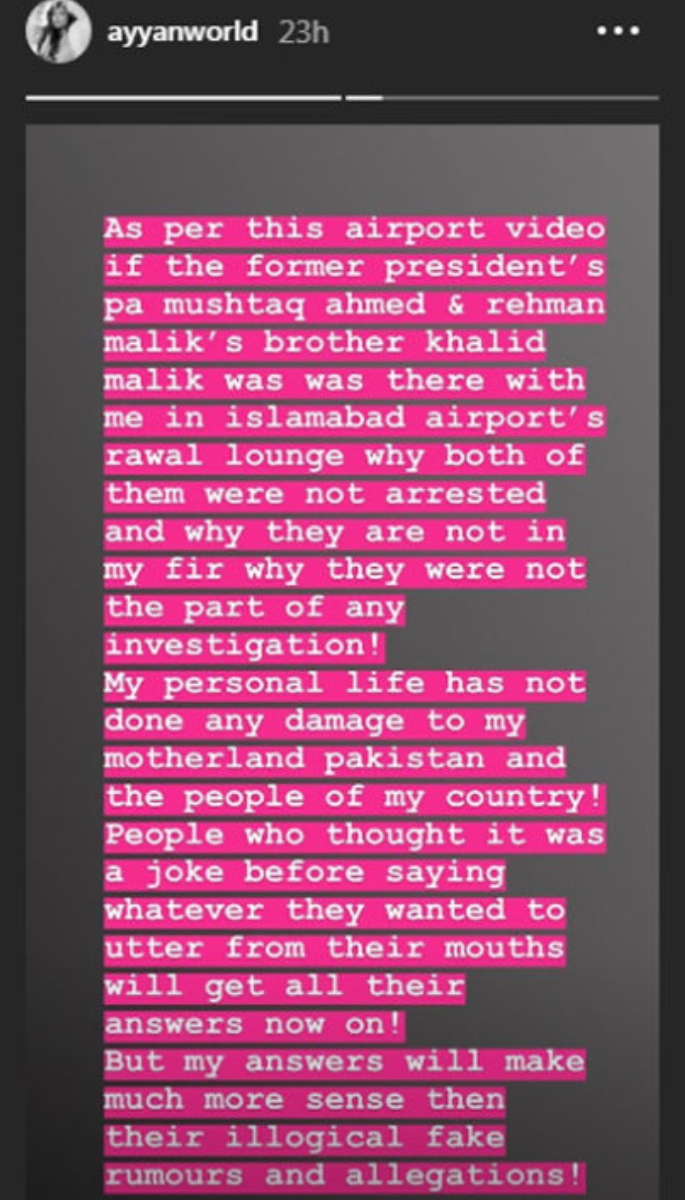 It appears Ayyan Ali is ready to put everything behind her and focus on her career once again.

Ayesha is an English graduate with an aesthetic eye. Her fascination lies in sports, fashion and beauty. Also, she does not shy away from controversial subjects. Her motto is: “no two days are the same, that is what makes life worth living.”
Premz talks ‘Mogul Mind’ (Brown Love) & Being Real
Singer B Praak & wife Meera Bachan welcome Baby Boy