Renowned Pakistani fashion designers have been accused of allegedly evading tax despite earning large sums of money from wedding outfits.

"Estimated that a huge loss of revenue would be detected.”

Pakistani fashion designers have come under fire for allegedly evading tax by the Federal Bureau of Revenue (FBR).

The 24 fashion designers received a tax notice which stated that there has been a “massive evasion of tax by marriage dress designers.”

The FBR stated that the accused designers paid little to no tax despite earning a large sum of money for each bridal ensemble.

In a notification delivered by the FBR, it was claimed that they came across this information of tax evasion while examining new taxpayers.

They came to the conclusion that the Pakistani fashion designers declared income did not correspond with their receipts. It said:

“Some of the designers even charge millions for a single dress but when their income tax returns were analysed it was found that quite a large number of these dress designers were paying very meagre amount of tax i.e. their declared income does not commensurate with their receipts. Some of them are even not on the tax roll.”

The FBR continued to reveal that an audit desk will be set up to analyse the designers’ tax return.

It was further added that the information regarding the designers’ income which will be matched with their declared Income and Wealth statements filed.

The notice also mentioned that “it is estimated that a huge loss of revenue would be detected.” 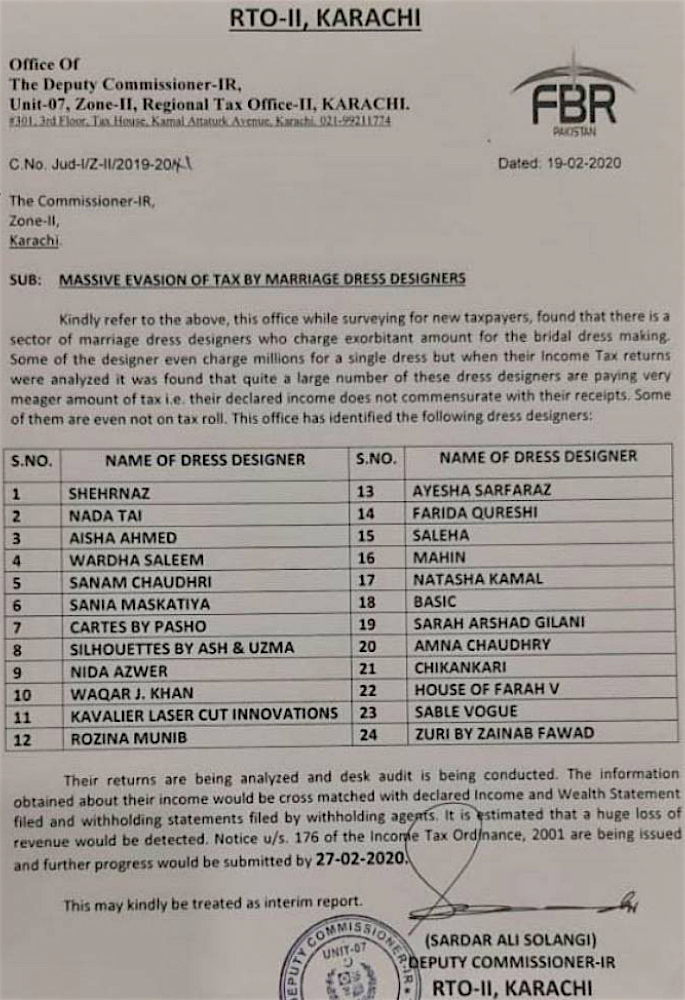 House of Farah V took to Instagram to clarify the alleged claims against them. They said:

“It came to our notice that we are on this list as clients of an establishment.

“House of Farah V are complaint of all tax laws and welcome any scrutiny of our records under the law.”

As of yet, the other 23 Pakistani fashion designers have not released a public statement regarding the alleged tax evasion accusation against them.

The notice also mentioned that “further progress would be submitted” by February 27, 2020.

We wait to find out whether the 24 Pakistani fashion designers are found guilty of evading tax and faced with strict consequences of doing so.

Ayesha is an English graduate with an aesthetic eye. Her fascination lies in sports, fashion and beauty. Also, she does not shy away from controversial subjects. Her motto is: “no two days are the same, that is what makes life worth living.”
Gorgeous Gowns worn by Bollywood Actresses
Gorgeous Wide Leg Salwar Kameez Suits to Wear