Bollywood actor Arjun Rampal has been spotted walking hand in hand with rumoured girlfriend Gabriella Demetriades. The two were on a dinner date together.

Bollywood actor Arjun Rampal has been spotted with model Gabriella Demetriades, adding speculation that the two are going out with each other.

Rampal has previously been linked with several other women, including Hrithik Roshan’s ex-wife Susanne Khan and  Natasa Stankovic from  Serbia.

Arjun and Gabriella have been seen together attending the M Power Event, which took place in Mumbai on November 11 2018. The duo posed alongside one another on the red carpet.

Around the same time, the pair also went on a dinner date in Mumbai, India.

Not shying away from the cameras, the rumoured couple were seen holding hands.

The two have been reportedly getting closer over the last few months, being seen together several times on lunch and dinner dates. 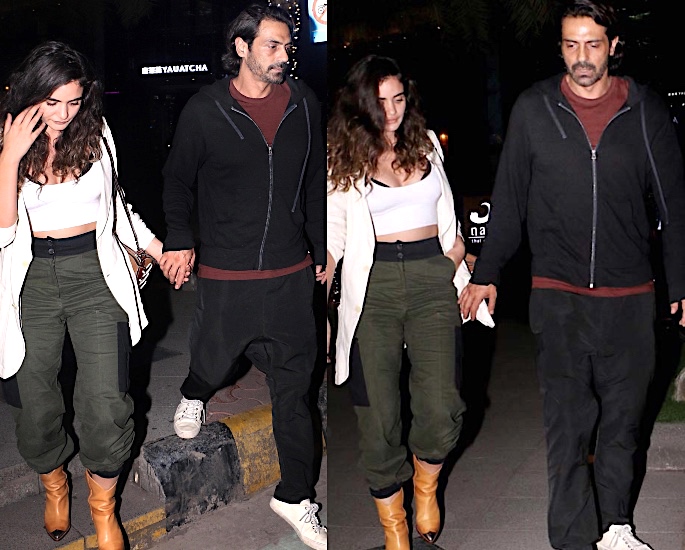 31-year-old Gabriella Demetriades is a South African model and actress.

The model got the limelight in India when she became a Miss Indian Premier League (IPL) Bollywood 2009 contestant.

She has also made an appearance in Hindi film Sonali Cable (2014) and had a cameo in Telegu film Oopiri (2016).

Besides images linking Demetriates with Rampal, Bollywood Hungama also shared a video of the two on Instagram.

Arjun Rampal was previously married to supermodel Mehr Jesia. Arjun and Mehr were together as husband and wife for 20 years. But on May 28, 2018, they announced their separation.

They have two daughters, 16-year-old Mahikaa and 13-year-old Myra.

In an official joint statement, Rampal and Jesia said:

“After a 20-year-long beautiful journey filled with love and beautiful memories, we would like to share, that all journeys have different paths.

We feel that it is time for us to move on to different destinations henceforth.”

Arjun was linked with other women in the past.

The pair denying these rumours claimed that they were just good friends.

Subsequently, after his divorce, Arjun was also rumoured to be dating Serbian model and actress Natasa Stankovic.

The model is best known for appearing in the popular song ‘DJ Wale Babu’ by rapper Badshah.

On June 05 2018, Rampal went on Twitter to poke fun at the rumoured link-ups, tweeting:

“Some mornings start with freshly brewed coffee, others with freshly stirred link ups! Right now it’s just my cuppa and me.”

Some mornings start with freshly brewed coffee , others with freshly stirred link ups !
Right now it’s just my cuppa and me ….. pic.twitter.com/Plevi4iUGg

On the work front, Arjun was last seen in war film Paltan (2018). The actor is set to star in Nastik alongside Meera Chopra and Harshaali Malhotra.

The film revolves around the journey of an inspector and how a child changes his perspective of life.

Nastik was to initially release on October 26, 2018. However, the film did not release as per schedule, with no new release date yet given.

Nevertheless, the Daddy (2017) star has done very little to hide his rumoured relationship with Gabriella Demetriades.

After being spotted together on several occasions, it appears the two are very much an item.

The pair seems to be getting closer day by day and they don’t seem to mind who knows about it.

Gabriella, who has been trying her luck with acting in India, could be soon acting alongside rumoured boyfriend Arjun.

But for now, Arjun Rampal and Gabriella Demetriades seem happy just being loved-up.