A popular Indian restaurant in Stoke-on-Trent faces losing its licence after an immigration raid was carried out and found illegal workers there.

"there have also been breaches of the premises licence conditions"

The operators of an Indian restaurant in Stoke-on-Trent could lose their licence after an immigration raid caught a pot-washer and a waiter working illegally.

Officers from the Home Office’s Immigration Enforcement department detained the two men during a raid at the award-winning Blue Tiffin, on the A50 at Meir, in November 2019.

The Home Office is now asking Stoke-on-Trent City Council to review whether the restaurant should keep its licence.

Staffordshire Police and the council’s licensing officers are also supporting the review after the venue was breaching parts of its licence.

The Indian restaurant was raided on November 28 following an anonymous allegation that Blue Tiffin was employing illegal workers “and had done for a number of years”.

One of the men had been working there for 18 months as a waiter, three or four days a week. The other man denied working there, claiming he was just helping out.

However, he had been working there for several months. Both men were paid cash in hand and ate for free during shifts.

Its review application stated: “The Home Office conducted an enforcement visit to Blue Tiffin on November 28.

“Two subjects were arrested. Along with that a closure notice was served and the premises now has a compliance order against them.”

A closure notice forces a restaurant to shut for up to 24 hours.

The report states that illegal workers have been found at the restaurant previously, during raids in 2017 and 2018.

Sergeant James Finn said police had visited Blue Tiffin in February 2020 to check it was complying with the terms of its licence.

Several breaches were found, including alcohol being served without food, and staff not being trained regarding underage alcohol sales.

Sergeant Finn said: “Taking into account the relevant guidance, and the fact that there have also been breaches of the premises licence conditions that are there to promote the licensing objectives, Staffordshire Police fully support the request of the Home Office to revoke the premises licence.”

Restaurant owner Shaz Rahman said: “We have done everything the authorities have asked us to do. We are hoping for the best.”

The matter was discussed by the authority’s licensing sub-committee at a meeting on July 21, 2020. It was adjourned. 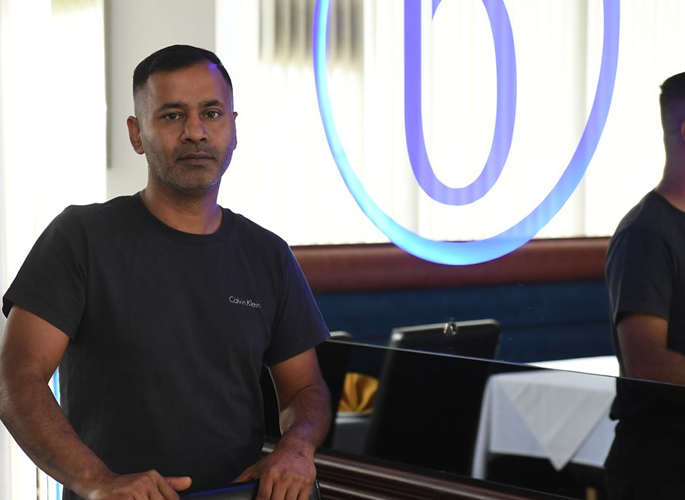 The Indian restaurant remains open, however, Mr Rahman revealed that he is now being subjected to vile abuse.

He said: “One man called me, said ‘hang yourself’, and put the phone down. I wasn’t scared for myself but I worry about my family – I have three boys.

“A lot of people have asked me if I’m OK. I have a really good customer base and people have supported me all the way through this.

“But there are people bored, sitting at home doing nothing, thinking ‘let’s have a go at this guy’.”

“I have never been in any trouble before – never had a licence defect or even a single complaint that I had done anything illegal.

“With the immigration issue, I have known one of the guys for 16 years in the community – he has worked in other restaurants.

As a result of the lockdown, his business has suffered.

He added: “My business has been 70 per cent down as it is. We’ve re-opened the restaurant but we’re doing 30 per cent of what we would do normally. We have been offering an NHS discount.

“Without an alcohol licence, my business is no good. If I do lose my licence I’m going to shut my restaurant down.”

Dhiren is a journalism graduate with a passion for gaming, watching films and sports. He also enjoys cooking from time to time. His motto is to “Live life one day at a time.”
Indian Man posed as Covid-19 Plasma Donor to scam Hundreds
East African Asians: Business & Challenges in the UK