An Indian man has allegedly ended his short-lived marriage after discovering his new bride has failed the virginity test. DESIblitz has more.

The village panchayat allegedly grants him the right to divorce her.

An Indian man has reportedly divorced his new bride the day after their wedding, because she is not a virgin.

The 25-year-old man from Nashik, Maharashtra, is said to have tied the knot with a woman from Ahmednagar in his second marriage.

The village panchayat, who considers a bride’s virginity highly valuable, gives the man a clean white bed sheet for his wedding night and waits for the couple to consummate their marriage.

When the man shows them the bed sheet without any blood stains, indicating the woman may not be a virgin, the panchayat allegedly grants him the right to divorce her.

The bride insists she is a virgin and explains that the intensive training she has been undergoing to prepare for joining the police academy may have caused her to ‘fail’ the virginity test.

Unable to overturn the panchayat’s ruling, she decides to register a formal complaint with the police with her mother’s support, but end up being locked in the house by her father, who fears the caste panchayat may impose ‘social boycott’ on the family.

Even Krishna Chandgude, an activist of the anti-superstition Maharashtra Andhashraddha Nirmoolan Samiti, cannot convince him to let his daughter seek justice from the police. 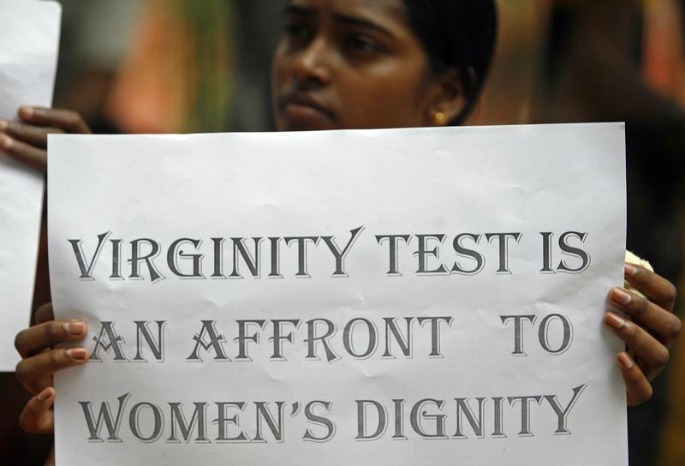 Later, the new groom claims he has performed the virginity test as requested by the girl’s family, which has been dismissed by the chief of Maharashtra State Commission for Women, Vijaya Rahatkar.

He also states that the couple will not end their marriage and that the earlier ‘divorce’ has been caused by other arguments.

Vijaya adds: “The girl has said that if her husband comes to take her back, she is ready to live with him.”

Shiv Sena leader and MLC Neelam Gorhe criticises the incident as inflicting ‘mental and physical cruelty’ against women, commenting: “Action can be taken against this even under current laws. We need more awareness to ensure such cases do not occur.”

An Indian bride’s virginity is a highly prized possession, which is perceived to reflect a woman’s morality through their sexual purity.

In 2013, it was reported that 450 women had to take virginity tests prior to a mass wedding organised by the government.

Whilst this attitude remains prevalent across India, it is somewhat mirrored in the British Asian community as well. Read more in our article here.

CheckDocs can help Landlords with Right to Rent checks
Is University a Must for British Asians?