The Bollywood designer formerly known as Swapnil Shinde took to Instagram and announced that she is a transwoman.

The designer took to Instagram on January 5, 2021, to make the announcement.

The designer has worked with celebrities including Kareena Kapoor Khan, Deepika Padukone and Shraddha Kapoor among others.

She also asked to be addressed as ‘Saisha’, which means “a meaningful life”.

Shinde wrote: “Irrespective of your origin, there will always be something that reminds you of your childhood.

“For me, it takes me back to the kind of loneliness that aches, to pressures that pushed me into solitude and the chaos of confusion that grew every moment.

“All through school and college, while the boys outside tormented me because I was different, the internal pain was far worse.

“I felt suffocated living in a reality that I knew wasn’t mine, yet one that I had to stage every day because of societal expectations and norms.

“It was only in my early 20s at NIFT where I found the courage to accept my truth; I truly bloomed.

“I spent the next few years believing that I was attracted to men because I was gay.

“It was only 6 years ago that I finally accepted to myself, and today that I accept to you.”

Shinde also shared an Instagram story where she mentioned that her team has started calling her “ma’am” about a month ago “with utmost pride”. 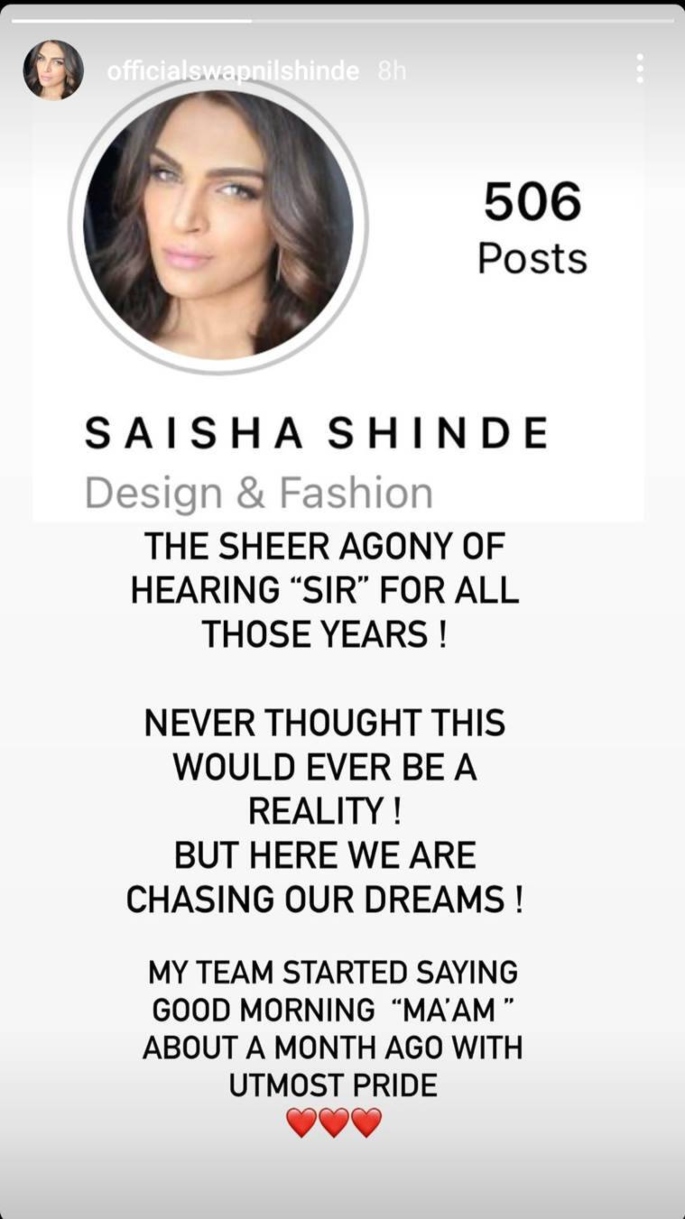 The designer rose to fame when she designed costumes for Madhur Bhandarkar’s Fashion (2008).

From there on out the Bollywood designer’s work became an instant hit.

In another Instagram post, the celebrity designer shared a picture of herself and wrote: “Here we go 2021. #saishashinde.”

As soon as Shinde shared the post, celebrities and well-wishers started sharing their messages.

“I love you and I am so proud of you for being the BEST YOU!! The YOU you always wanted to be.

Parineeti Chopra commented: “So happy to read this. Up and up from here, Saisha.”

Akanksha is a media graduate, currently pursuing a postgraduate in Journalism. Her passions include current affairs and trends, TV and films, as well as travelling. Her life motto is 'Better an oops than a what if'.
Anushka Sharma shares Her Maternity Style
12 Bollywood Actresses in Bikinis on the Beaches of Maldives