We present some of the amazing maternity styles from Bollywood actress Anushka Sharma for you to take inspiration from. Take a closer look.

Anushka Sharma looks as pretty as a peacock

Known as one of Bollywood’s most fashionable divas, Anushka Sharma has not allowed her style to falter during her pregnancy.

The actress has been a fashion inspiration since her Bollywood debut in 2008 with Aditya Chopra’s hit film, Rab Ne Bana Di Jodi alongside Shah Rukh Khan.

Since then, Anushka has mesmerised fans with her enviable sartorial choices. In fact, she continues to do the same with her maternity wear.

In August 2020, Anushka Sharma and her husband, cricketer Virat Kohli broke the internet with a joint announcement of the pregnancy.

Naturally, fans rushed to congratulate the happy couple. The actress has continued to share pictures of her growing baby bump and the stunning ensembles she’s wearing.

We take a look at Anushka Sharma’s gorgeous maternity wardrobe.

The One with the Announcement 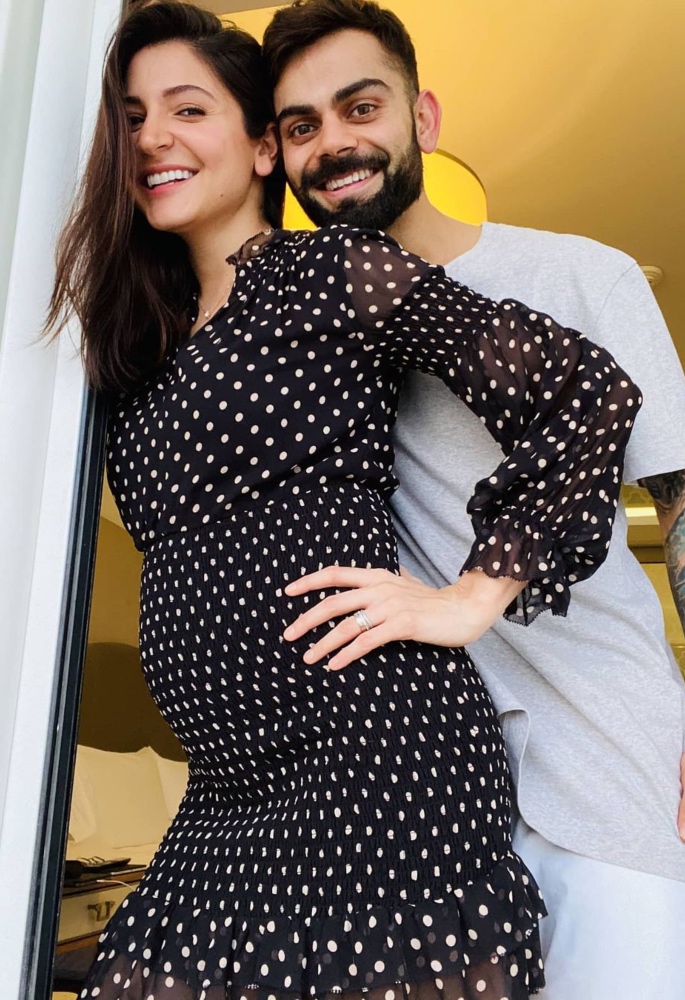 As mentioned above, the couple posted a joint announcement which read:

Alongside the post, the couple shared an adorable picture in which they are smiling.

As well as the exciting news, we could not help but adore Anushka Sharma’s cute dress.

The actress kept accessorising to a minimum with a simple silver pendant necklace and her wedding ring. 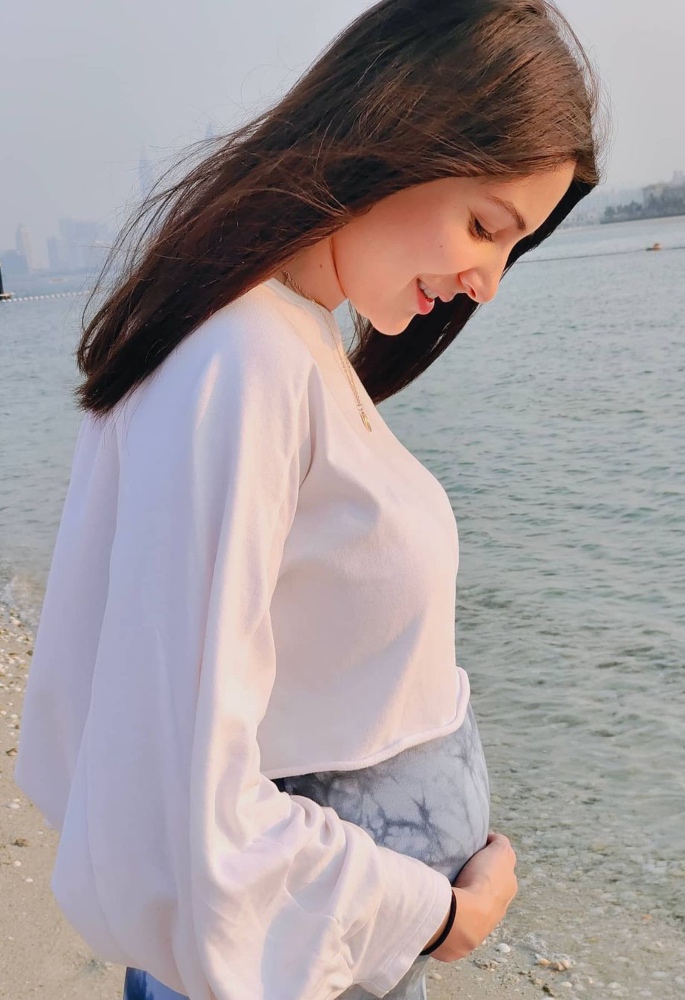 Up next, we have Anushka Sharma looking effortlessly chic in a casual ensemble she wore while at the beach.

Once again, the Band Baaja Baaraat (2010) actress kept accessorising to a minimum with a simple gold necklace.

To complete the look, Anushka went for a ‘no makeup, makeup look’ with her hair cascading past her shoulders.

The actress is also seen lovingly cradling her bump. She captioned it:

“Nothing is more real & humbling than experiencing creation of life in you. When this is not in your control then what really is?”

Needless to say, the mother-to-be looked stunning in this casual outfit. 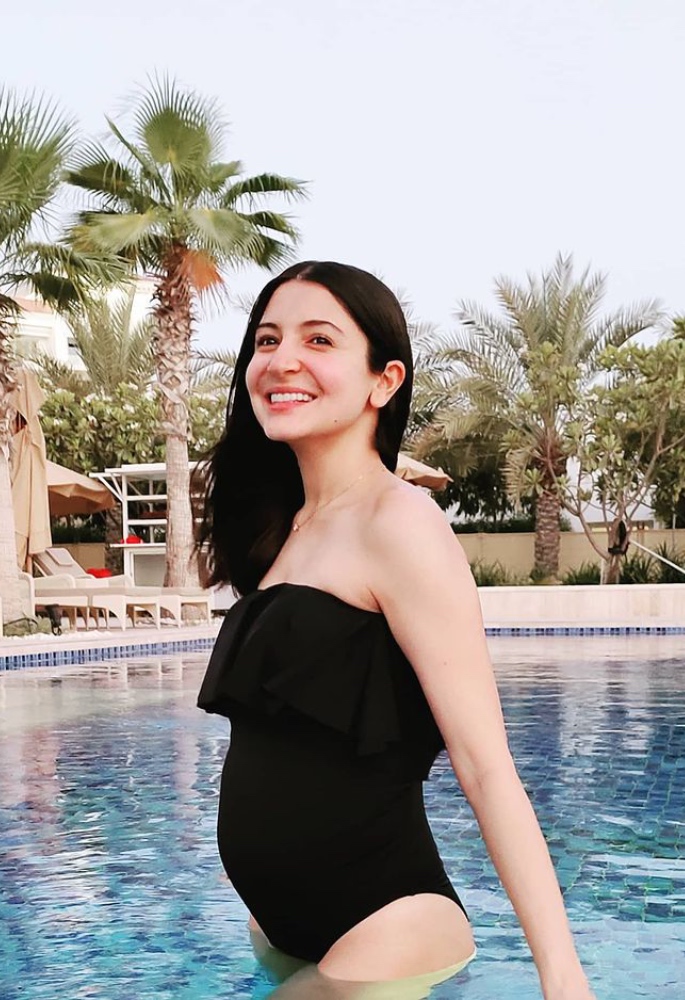 From the beach to the pool, Anushka Sharma looks beautiful in this black swimsuit.

Although this is a rather plain swimsuit, the inclusion of the ruffles adds dimension to the ensemble.

Here, the actress is fresh-faced with no makeup and a slight wave to her hair.

She looks breathtakingly beautiful with little effort. She proves maternity wear can be taken to the pool. 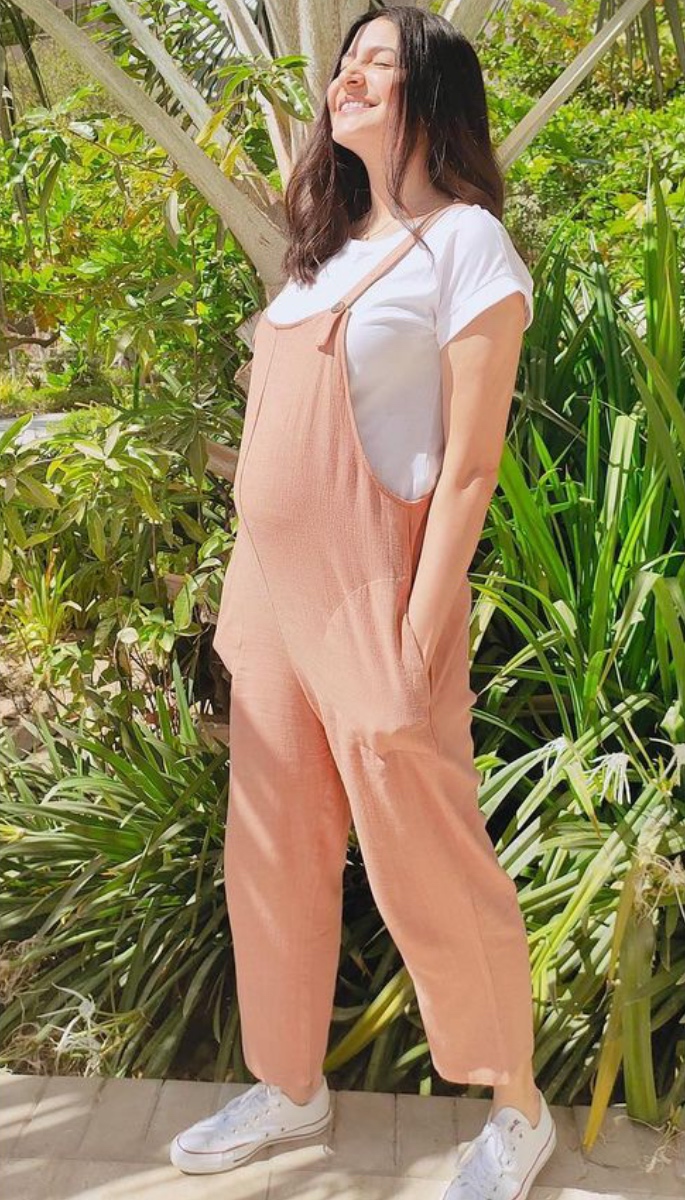 A dungaree is an understated outfit, however, if worn right it can look gorgeous yet casual.

While pregnancy can generally be uncomfortable at times for many women, their wardrobe choices can add to this sense of discomfort.

However, Anushka ensures she prioritises on comfort without compromising on style.

The Bollywood diva is seen posing in a peach coloured dungaree with buttoned fastening, relaxed leg fit and pockets.

She teamed the look with white converses and a white short-sleeved tee. She captioned the post:

There is no doubt that Anushka Sharma is relishing in the delight of her pregnancy and looks amazing while doing so. 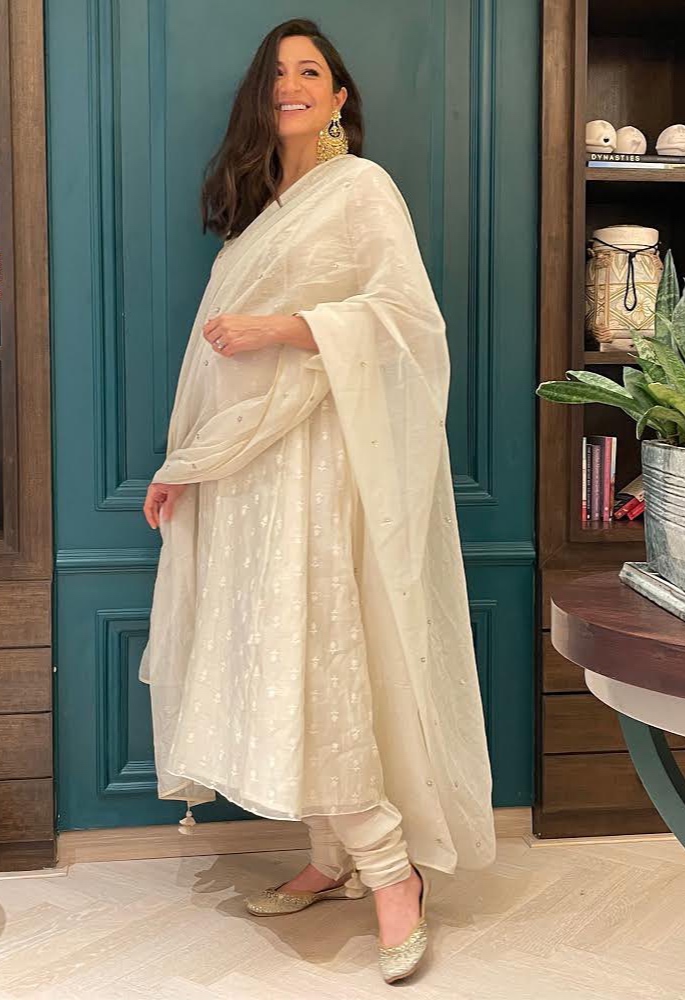 Another gorgeous look from Anushka Sharma’s maternity wardrobe is this beautiful cream coloured ethnic ensemble which she donned during Diwali 2020.

Here, the actress is seen wearing an Anarkali dress with churidar and a large dupatta draped across her torso.

The simple yet stunning outfit features thread work detailing scattered across the Anarkali dress in the same colour.

She paired the ensemble with cream and gold juttis and large statement earrings to enhance the look.

Allowing her pregnancy glow to shine, Anushka went for a subtle makeup look and barely-there waves. 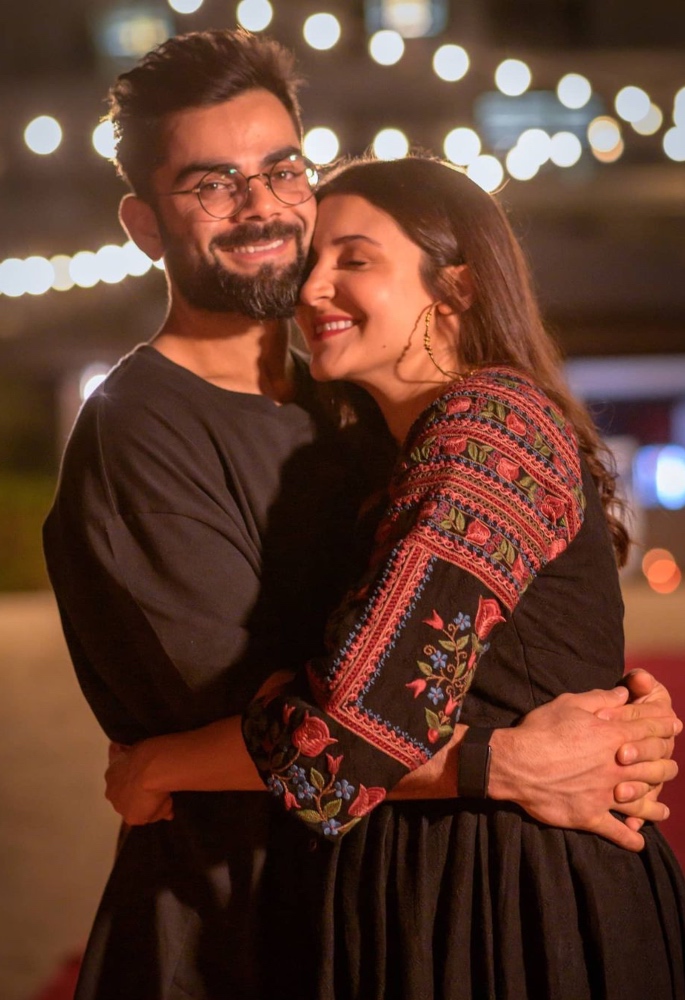 Anushka Sharma is known for her kurta collection and here she is showcasing one of her many chic kurtas.

Wrapped in the embrace of her loving husband Virat, Anushka is seen sporting a black peplum kurta.

The devil is in the detail with this outfit as the beautifully intricate thread work on the sleeves steals the attention.

The best thing about this look is that it can easily be recreated whether you are pregnant or not. 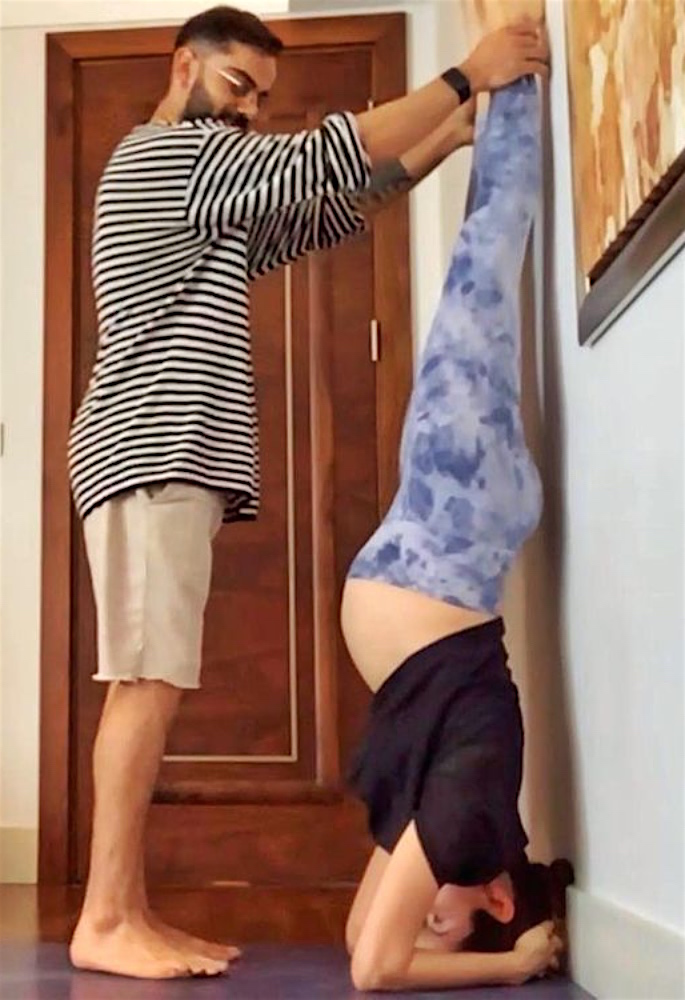 Anushka has not allowed her pregnancy to get in the way of her athletic ability. The actress prides herself on her healthy lifestyle which includes yoga.

The mother-to-be is seen wearing tie-dye leggings with a black t-shirt.

While the leggings fit her curves and bump perfectly, the black t-shirt adds a relaxed element to the look. 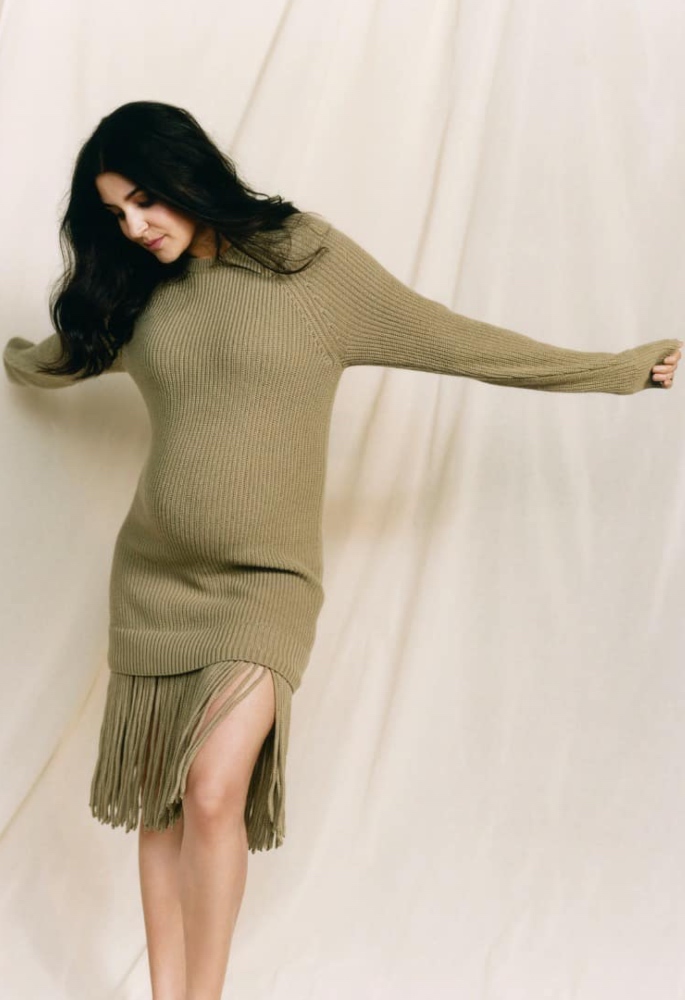 Featuring on the cover of Vogue India, Anushka Sharma flaunted her amazing maternity style for all to see with multiple outfits.

In particular, this exquisite khaki coloured midi dress by Michael Kors looks both comfortable and pretty.

What caught our attention was the tassel hem which adds an edge to an otherwise plain knit dress.

For her makeup, Anushka has opted for black smokey eyeliner and a nude lip. 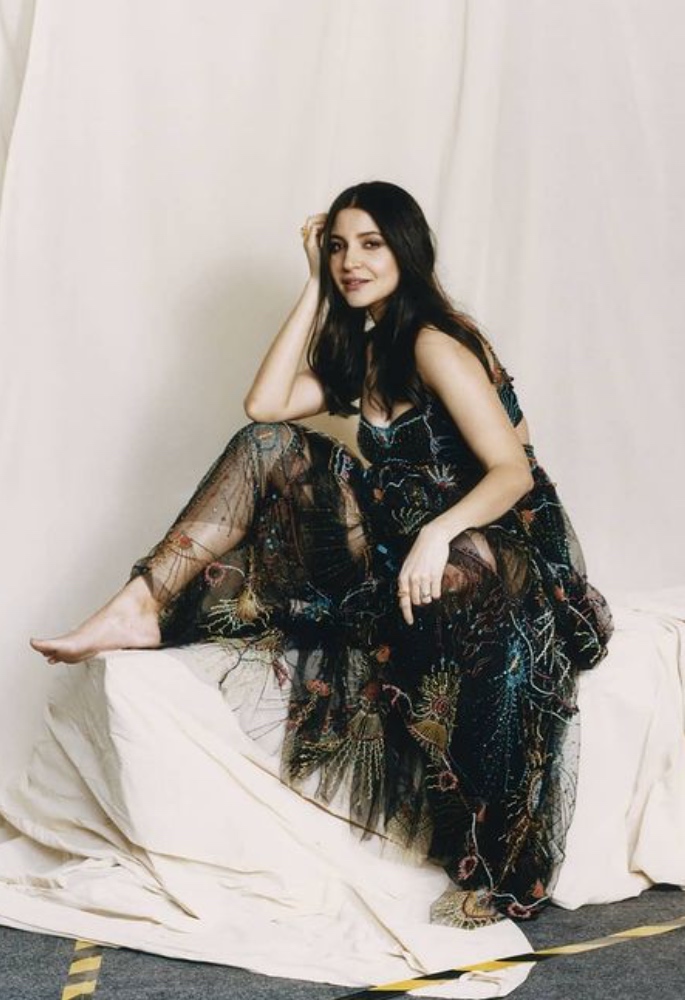 Anushka Sharma looks as pretty as a peacock in this elegant Dior dress for her Vogue India shoot.

The actress was styled by Priyanka Kapadia and looks sensational.

The dress features gorgeous bird motifs throughout with a low neckline and sheer skirt.

To complete the look, Anushka wore jewellery by Dior for an all-Dior look. 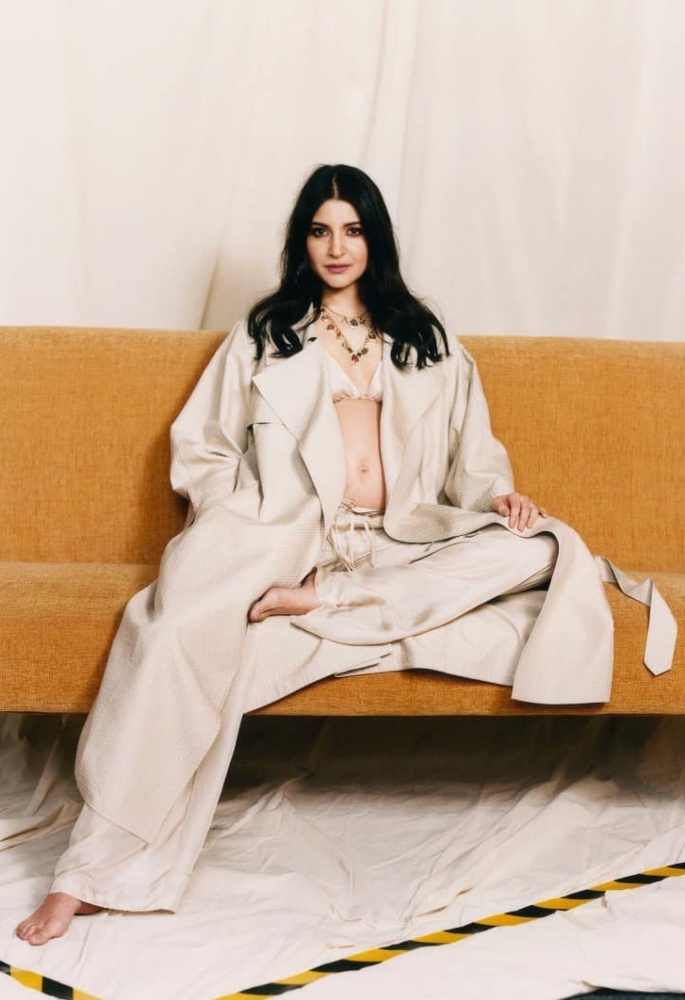 Looking exquisite in an all-nude outfit, Anushka Sharma flaunts her baby bump as she poses on the sofa.

The actress is wearing a Sabyasachi bra, trench coat and pyjama trousers and jewellery.

Anushka Sharma is certainly the epitome of looking graceful and chic while pregnant. Her Instagram is filled with inspiration for many to explore.