"She doesn’t need to talk, dress or behave in a particular way to win hearts."

There are countless bold and strong female characters in revolutionary films these days.

Shivani Gorle, a 21-year-old Indian girl who lives in Mumbai, has found an artistic of appreciating them.

As a way to increase the acceptance of female leads around the world, Shivani decides to illustrate her favourite female prominent characters in movies.

“The idea behind Queens on Screen is that the heroine is just as badass as the hero.

“She doesn’t need to talk, dress or behave in a particular way to win hearts. Or not win hearts. Because she can do whatever she wants.”

The idea came about when Shivani was browsing through Netflix and came across a category called ‘featuring a strong female lead’.

She says: “I thought it was a sort of strange to ascribe a separate category for films with strong female leads, when there could just be regular movies with equally important roles for both characters.”

Her illustrations include Bollywood characters, such as Silk from The Dirty Picture, Shashi from English Vinglish and Rani from Queen.

Shivani also incorporates Hollywood characters in her illustrations such as Miranda Priestly from The Devil Wears Prada and Hermoine from the Harry Potter series. 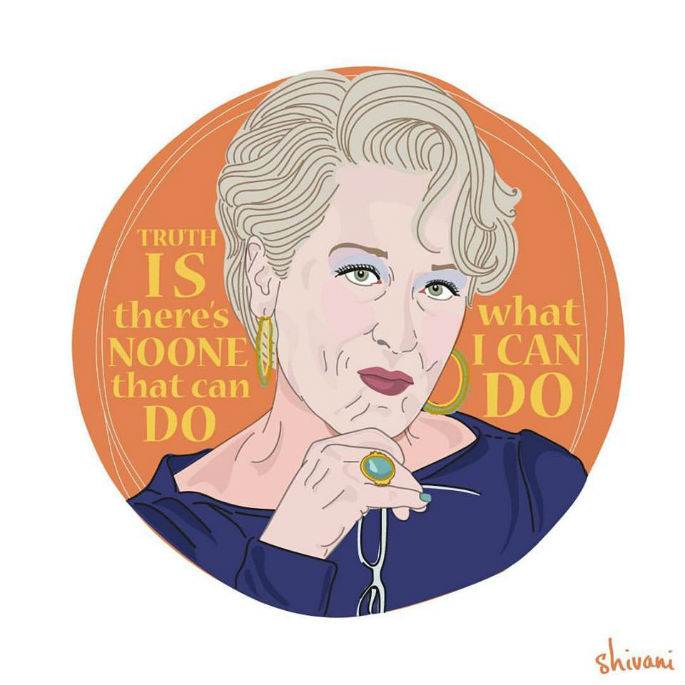 She adds: “The kind of movies I like to watch have strong bold characters that could be male of female.

“But I chose the female characters because I think they need more recognition.

“We need to read more into those powerful dialogues and bold statements that actresses deliver in these movies.”

Shivani goes on to explain that she hopes her work will drive the perception that these films have become real vehicles of social change:

“Female actors have come along way since the 20th century.

“What may have been a sad-state-of-affairs for gender equality on the film industry several decades ago, is not slowly adapting to a freer, more diverse and equal world.”