An inspiring poet and artist, Imtiaz Dharker has had an extraordinary career. In an exclusive Gupshup with DESIblitz, Imtiaz talks inspirations, cultural influences and advice for young British Asian writers of today.

With a multifaceted career spanning from poet, artist and documentary filmmaker, Imtiaz Dharker has made her own definitive mark on the world of literature through her richly textured poems.

Imtiaz is known especially for her enchanting drawings combined within her poetry, which act to amplify her words as opposed to illustrating a story. It is unsurprising that she is frequently defined as one of the most moving British Asian poets of our time.

Dharker has described herself as a ‘Scottish Muslim Calvinist’ due to her Lahori family upbringing in Glasgow and during her studies, met an Indian Hindu. 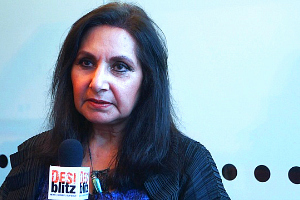 The two eventually married, eloping to Mumbai much to the disapproval of her family who subsequently disowned her. Despite such set backs, Dharker refused to dampen her creativity.

An array of accomplishments from a Silver Lotus film award to countless solo exhibitions for her drawings boast an incredibly deserved and rich career.

She recalls her time in India fondly, and in an exclusive Gupshup with DESIblitz tells us: “India was a great place for me at the time. It was wide open to amazing experiences. India was a place to develop my writing, and in many ways Bombay was very king to me.”

Dharker has always considered herself to belong to more than one cultural identity and feels privileged enough to experience a vast array of different geographies: “I don’t think it’s a struggle to deal with dual-identity, I think it’s a richness,” she tells us. 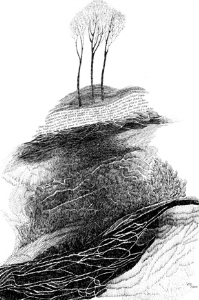 “Identity is inside our skin. It’s just a case of recognising that our identities are actually there and they are all equally valid. It’s not because you are born in one geography and its culture forever and ever.

“People evolve and change and grow and part of growing is to take in all kinds of cultural influences,” she says.

With five published books under her belt, Dharker has been able to draw attention to themes of freedom, cultural displacement and gender politics.

Being a British Asian woman often means falling victim to experiences of injustice, oppression and violence of which Imtiaz talks of personally throughout her writing.

“Blessing” is a poem that has valued her incredible and appropriate recognition. Her work in Indian slums acted as the seed from which this poem grew. The writing talks of the vitality of water. Just as the rare British sunshine makes everyone a little happier, the rain in India is where you can see children dance in the streets. 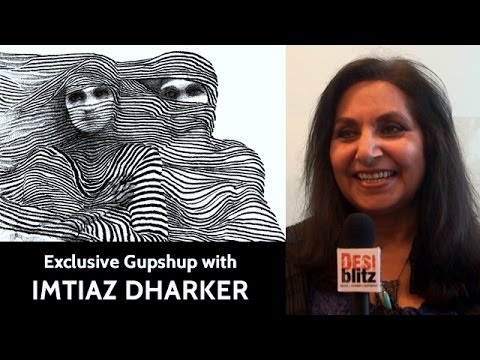 Her inspiration emanates from everyday life, everyday things and from normal people. Dharker admits that: “Poets are great eavesdroppers.”

She goes on to say that once the germ of an idea has been planted and the first line is written on a white page appears and that is a magic moment.

Featured in our DESIblitz interview with the poet and artist is her poignant piece, “They’ll say, ‘She must be from another country’.”

Dharker captures her appetite for tackling cultural oppression, battling through Asian stereotypes of “being stupid” by ironically using her intelligent writing as a weapon.

They’ll say, ‘She must be from another country’

But from where we are
it doesn’t look like a country,
it’s more like the cracks
that grow between borders ?behind their backs.
That’s where I live. ?And I’ll be happy to say,
‘I never learned your customs. ?I don’t remember your language ?or know your ways.
I must be
from another country’.


Dharker’s recognition as an established writer and filmmaker has earned her the title as a Fellow of the Royal Society of Literature in 2011 and in the same year recieved the Cholmondeley Prize by the Society of Authors.

Her career has also led her into judging poetry competitions for young writers across the UK. A strong interest in education has brought her full circle, more recently becoming the poet in residence at the Cambridge University Library. 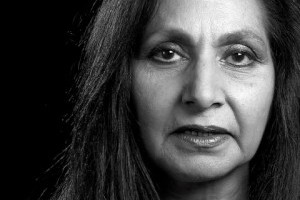 It is evident through her poetry’s recurrent appearances on the British AQA GCSE English Syllabus that her work is incredibly influential to young people.

Dharker’s advice for aspiring writers is to read voraciously, both what you love and too what you don’t:

“Find your own voice. First of all read, find the writers that you admire, read them, internalise it. Read what you love and then read also what you don’t love, find out why you don’t love it.

“Then if you are beginning to write, find your own voice. It’s your voice that make’s whatever you are writing different. And I don’t mean just a kind of splurge of emotion, make the voice true.”

Often new writers tend to copy the style of writers whom they have admired from decades ago. Although their work may still be popular, it can lack relevance to a current audience. The key is to take inspiration from your favourite writer’s but to translate your own ideas in a style that is your own.

Imtiaz Dharker is presently concentrating on continuing to create new poems and drawings, as that is where her passion truly lies. Her popularity thanks to her timeless writing has allowed her, as a British Asian, to emphasise cultural difficulties to both an Asian and Western audience. Dharker’s talent continues to inspire young generations and will do so for future generation’s to come.

Laura is an avid writer with a particular interest in writing from a feminist perspective regarding a variety of social and cultural issues. Her passion lies within journalism. Her motto is: “If there's no chocolate then what is the point?”
A History of South Asian Martial Arts
Dubai unveils Mall of the World plans