Samera Ashraf is a response constable from Police Scotland who aims to encourage more women from the British Asian community to join the force.

Samera has had an interesting journey, especially as she had not started her working life with the police.

Following completion of her post-graduate sociology degree in Scotland, she initially began her career as a caseworker with Women’s Aid.

After working on sensitive issues at Women’s Aid and completing multi-agency work with Police Scotland, she decided to work for the police.

She started as a police constable and following training became an operational constable.

Based in Edinburgh city centre, Samera closely works with the different communities and supports women from the region too. 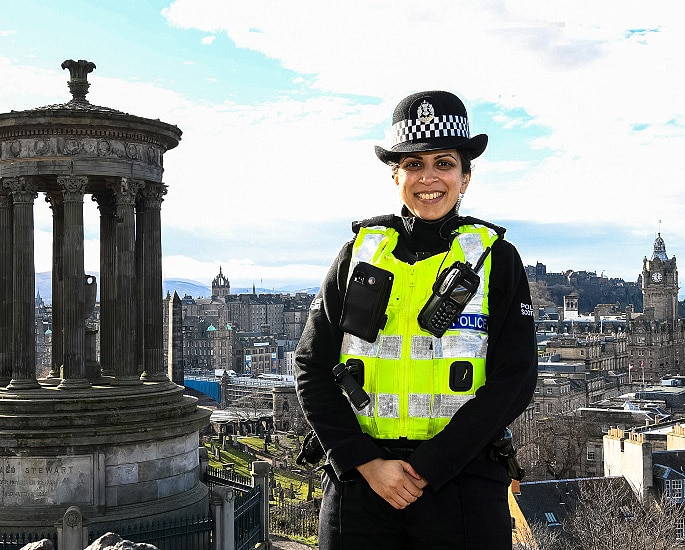 Coming from an ethnic background, Samera is able to speak Punjabi and Urdu, which is a huge benefit for this job portfolio.

In an exclusive Q&A with DESIblitz, Samera Ashraf gives a more in-depth insight about her aspirations, motivation and the exciting journey she has embarked on with Police Scotland.

Tell us about your childhood and aspirations?

I grew up in a large predominantly male family. This meant my family were very strict with the way I was raised so I would honour the family and reputation.

I always had a passion for sports but from puberty was told I had to dress modestly and wear culturally appropriate clothing.

By default, this meant not taking part in sports as shorts and a t-shirt were not deemed suitable by family. This did not deter me from playing football or cricket with family members. I would wear shalwar kameez with trainers!

I always watched boxing events and The Worlds Strongest Man on television and I wondered why females were not televised in contact sports.

So decided to save money and join a local karate club. I had to pay for my brother to attend as I would not have been allowed to go on my own.

I left the club a senior belt and felt it was important for a young woman to know how to defend herself.

What motivated you to pursue a career in policing?

After completing my post-graduate degree, I worked at a Women’s Aid for 6 years as a caseworker.

The service provided was for women and children of an ethnic minority who were/are victims of domestic abuse.

I assisted women who were victims of honour-based violence, female genital mutilation, forced marriage and other culturally sensitive issues.

When completing multi-agency work with Police Scotland, the women were often reluctant to disclose information to Officers.

This is due to their age, gender or not being from an ethnic minority background to fully understand and appreciate their circumstances.

By no means was it an easy decision to make. 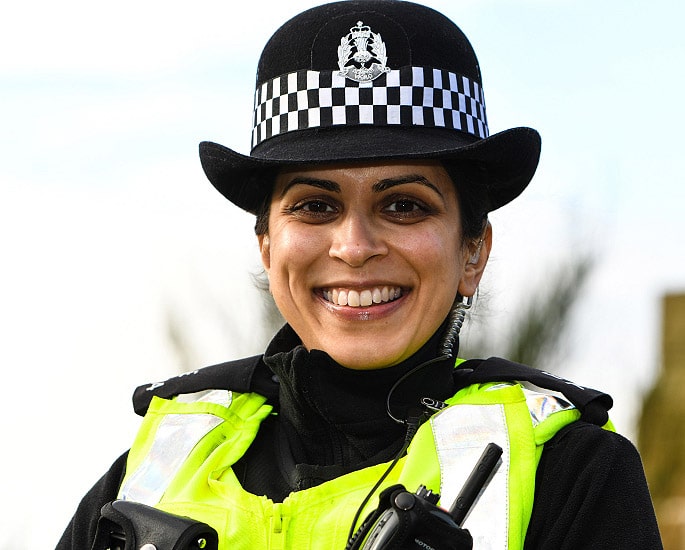 What attracted you to Police Scotland?

I had completed a great deal of partnership working and decided to utilise the connections I had made by joining Police Scotland.

The emphasis is placed on de-escalating a situation and using communication skills effectively.”

I have lived in Scotland for over 10 years and feel like it is my home. So, decided to apply for Police Scotland.

How did your family feel about you joining Police Scotland?

I decided to inform my parents once I had completed the full recruitment process and had my official start date in writing.

Reason being, I did not think they would approve due to the high level of risk associated with the role.

I was surprised to receive a positive reaction from my parents. It meant a great deal to have their support. No-one in my family or wider community have any issues with my role as a Police Officer.

Tell us about the recruitment process?

I completed a number of stages as part of the recruitment process, starting with the;

They have a voluntary Introduction to Policing Programme which lasts for 4 weeks (during weekends).

This provides an opportunity for those with an interest in Police Scotland to learn more by asking existing Officers what the job is really like and to discuss various areas of the recruitment process.

The aim is to encourage members of the public from ethnic minority backgrounds to be represented in the Police Service.

Without the Positive Action Team’s support and guidance, I would not have felt confident enough to complete the recruitment process. In my view, they are more like a family than a team.

When you become operational you are allocated a tutor who you shadow for a set number of shifts. That allows you to establish your own policing style and ways of communicating with members of the public. 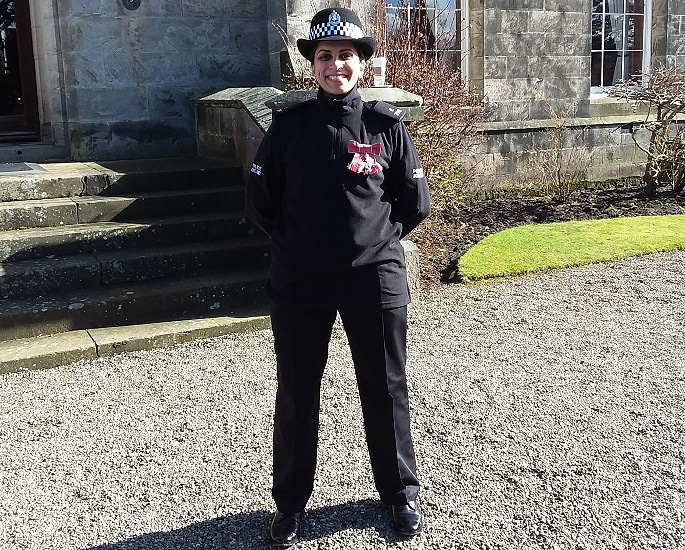 What advice can you give to Asian females considering a career as a police officer?

Since joining the Police, so many women from my community have told me they have an interest.

But they never pursue it due to family commitments or concerns with regards to what the community will say.

My only advice there is if you really want to do it the only person to stop you is yourself.

You need to push past the cultural barriers that hold you back and be a positive role model for other women in your local and the wider community.

What was involved in the training?

The 11-week residential involved practical and academic exercises which were constantly assessed.

You learn how to handle emotionally challenging situations through practical exercises as well as learning to use the equipment in a safe learning environment.

You are expected to learn about areas of policing such as crime, general police duties, diversity and road policing. These areas are assessed with knowledge checks to provide an indication of performance levels.

The tutors were very helpful and would often have after-hours classes for those struggling with difficult policing areas or those just looking for the right studying technique.

Your fitness has to be of a good enough standard to pass 2 fitness tests throughout your time there. There was an opportunity for those for religious purposes to request their own room and not share with another person.

What is the most rewarding aspect of being a Police Officer?

Working as part of a team, knowing that everyone works with each other and not against each other.

“I have learnt about myself and how resilient I am, on a daily basis.”

I am completely out of my comfort zone, but I know I am well supported and that makes the role much easier. 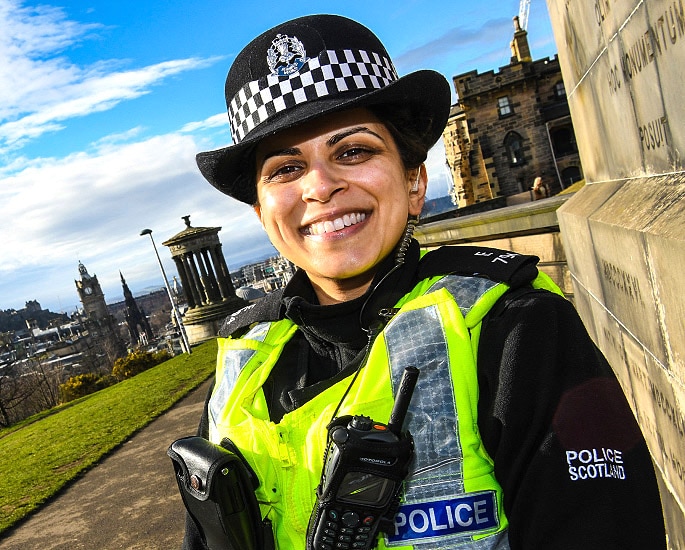 Why is it important to have more Asian female Police Officers in Scotland?

There is under-representation of Asian females in Police Scotland and the wheels are in motion to drive the message forward to our local communities that we need their support in encouraging women to come forward.

Police Scotland recognise that there is a need to show inclusion for Muslim women in particular and have an official hijab, with the view of being open to further changes to be made.

Generally speaking, there is a stereotypical view of an Asian/Muslim woman being submissive and passive to males within their families and in their community.

It should be emphasised that women are often the backbone of the family and have many skills they can bring forward for such a role.

For example, language skills, knowledge of the community, being culturally sensitive, good communication skills, finding a work-life balance and multi-tasking.

What are your career ambitions within Police Scotland?

At present, I would either like to work towards a career in recruitment or the Public Protection Unit, dealing with areas such as child protection and domestic abuse.

Given that I have a strong background in the area of domestic abuse as a professional, I feel I could transfer those skills to good use in Police Scotland.

I have extensive knowledge of the issues surrounding domestic abuse and would certainly like to use this to help others.

What would you say to other Asian women thinking about joining the police?

I recently gave a presentation to a group of 17-19-year-olds in college about my role in the Police.

There was a young South Asian student who said to me ‘Did your family let you join?’ I replied with ‘No, I told them I was.’

“If you wait to ask permission for areas in your life you wish to explore, you may never get there. Take that first step!”

The story of Samera can be very inspirational to Asian women who have ambitions to join the police force.

Samera has shown it is never too late to apply, join and even have a beneficial career change as she did with Police Scotland.

Diverse as she is, Samera is also a recipient of an MBE for Sports and Diversity in 2019 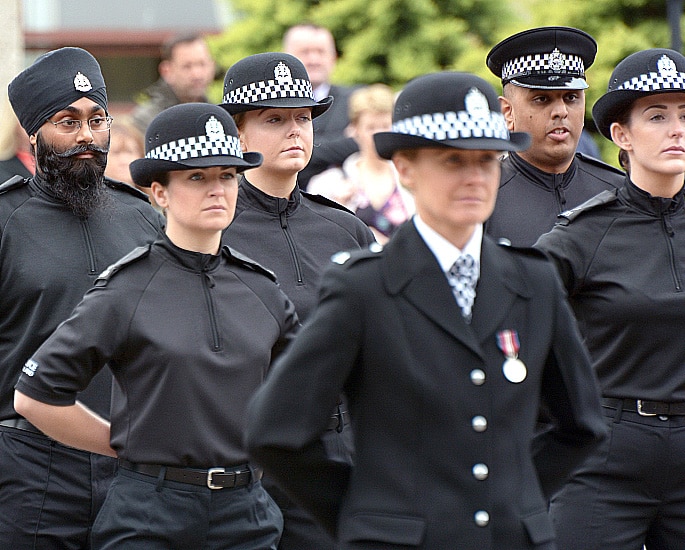 Police Scotland are committed to promoting diversity and is an equal opportunities employer.

The Positive Action Team work closely with people from ethnic minority communities to encourage them to consider a career in policing.

The team are available to answer any specific recruitment questions you may have. They can also guide, mentor and encourage you to consider a career as a police officer or special constable.

The team can be contacted at; recruitmentpositiveactionteam@scotland.pnn.police.uk or join their Positive Action Facebook page; Police Scotland Positive Action.