It was then decided that no dowry was to be given.

Big fat Indian weddings were once the norm in India and around the globe, however, this is no longer the case as a result of lockdown and the Coronavirus pandemic.

On a global scale, there are hardly any stories of Indian weddings taking place in countries like the UK, USA and Canada due to the strictness of lockdown rules and stronger restraints imposed by the western governments.

However, in India, the rules are slightly less stringent.

Indian weddings have been allowed to still take place as long as permission is granted for them to do so by the local officials and police in accordance with the guidelines.

The majority are only allowed with the presence of only close family members and up to five people in most cases. Although some photos and videos of weddings do show a few more than five people present.

In addition, police are also known to attend the ceremonies to ensure protocols are being followed by the families.

It is questioned why Indian weddings are still going ahead and why the families could not wait until after the lockdown or postpone them until later in the year or even 2021.

However, the bigger and more remarkable positive side effect of these weddings is that where once lakhs and even crores would be spent on such weddings, the families are being forced not to do so.

Especially, when it comes to cultural practices like a large dowry or lavish grand receptions, the Indian weddings are taking place are definitely on a much smaller scale and in most cases over in a short space of time.

In order to prevent the curfew from being breached, weddings are now being completed in an hour or less as opposed to the several it would take in the past.

This is somewhat nostalgic to how weddings once were in the very old Indian past with simple ceremonies and more focus on completing the union quickly without the grand receptions which followed pre-lockdown times.

Most of the Indian weddings which have taken place show that if the wedding must take place, it needs to abide by the Indian lockdown rules and must be performed with little fuss.

There have been families who have apologised for not being able to invite all the relatives and friends to the weddings. But still have insisted on the wedding of their son or daughter to still proceed.

Some have even taken place over video apps such as Zoom, including the religious ceremony being performed in isolation by the priest as well.

A wedding between Sushen Dung and Keerti Narang took place using Zoom. Using the video app meant that hundreds of people were able to witness the marriage virtually.

Baraats and big processions usually witnessed at such Indian weddings have been completely minimised to a handful of close family in a car travelling with the groom to get married.

Hence, reducing the cost of such weddings, the family stress, pressures and grandeur of them. Turning them into simple affairs which are managed very comfortably by those attending or watching. 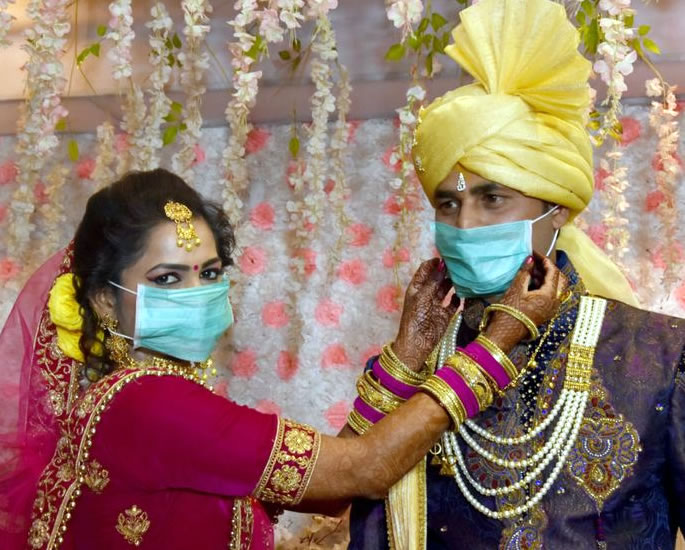 A wedding took place in Jalandhar, Punjab, but both families agreed that no dowry would be given due to the ongoing situation.

An engineer named Abhinandan was arranged to marry Ambika Kumari. Their wedding was decided in December 2019.

Due to lockdown, Abhinandan’s family wanted to postpone the wedding but Ambika suggested that they have a simple ceremony.

It was then decided that no dowry was to be given.

On May 3, 2020, five members of Abhinandan’s family attended the wedding. Ambika’s brother Pawan stated that only a few people would attend the wedding.

Following the wedding, the newly married couple said that all Indian weddings in the future should be more simplistic.

All the Processions but Simpler

Alladi Ravi, Executive Auditor at Chroma Electronics explained this his sister’s wedding included all the processions but they were on a far smaller scale.

Although family members were hesitant about the wedding, Alladi and his brother decided that the wedding should go ahead.

He said: “We lost our parents and seeing our sister get married was important for us.

“Originally, we had booked Krishna Reddy Function Hall near Sriramana Theatre in Amberpet (Hyderabad) and had expected to invite over 1,000 guests.

“Eventually, we had to perform her wedding at a local temple at Ashok Nagar in Golnaka.”

A large venue was chosen so that the 18 attendees could safely practice social distancing.

Alladi said: “We believe in traditions and rituals. So although we knew things would not be extravagant and will have to be conducted without many of our loved ones, we did not want to compromise on the rituals.”

The police were informed and their guidelines were followed. The wedding took place at 8 am.

Optional extras, which would usually take up a lot of the wedding budget, were simplified.

A close family friend who was also a florist created a small flower decoration while music from YouTube was used instead of hired musicians.

The wedding meal was still a grand feature, although another friend who ran a catering company and his mother prepared the food.

Alladi’s sister used her extra saree from her engagement for her wedding. Meanwhile, family member contacted friends to provide them with the required accessories.

At the wedding, everyone wore face masks and maintained a safe distance from each other.

“While we feel sad that we could not invite our loved ones for the only girl’s wedding in the family, we are happy that we could give her a couple of lakhs that we saved on the wedding expenses.

“The caterers and the wedding hall manager told us they would refund our money in three months after their business picks up.”

He went on to say that the simple ceremony was memorable as it was about making the most of certain situations.

In Nagpur, Maharashtra, on May 5, 2020, a couple got married in a simple ceremony, with the priest completing the rituals in a video call.

Sonu Awale got married to Shalaka Bahadure while the priest was on a video call. The wedding was completed in 20 minutes, with four family members present.

Sonu initially wanted a grand ceremony but decided on a simple one due to lockdown as well as fulfilling his bed-ridden father’s dream.

The wedding was arranged in September 2019 but COVID-19 resulted in the wedding being cancelled.

Sonu was worried about his father’s health so he approached the police to ask for their permission to get married, however, it was rejected.

He eventually got permission but was told that the couple could only invite two guests each.

Sonu said: “I took my mother with me and reached Shalaka’s place. She too had invited only two guests apart from her parents.”

Following the video call marriage, Sonu is planning to use the money saved to feed 500 vulnerable people.

An improvised marriage took place in the town of Shajapur, Madhya Pradesh where there were only a few guests and some social distancing. There was also no pandit.

Bhavna got married to Chandan. The newly married couple explained that they had made a lot of preparations but due to COVID-19, their arrangements were ruined.

They were initially upset but they decided to go ahead with the wedding, but with extra precautions.

Bhavna and Chandan took part in some elements of the procession.

Seeing this, both families knew that they could not stop the ceremony. Deciding that the marriage would go ahead, they made sure that necessary adjustments were made so that the curfew was not breached.

Chandan’s baraat procession only had five people and they all kept their distance.

The pandit did not turn up due to the lockdown. Instead, an improvised ceremony went ahead.

The Indian wedding was very simple, with hardly any elements.

The bride and groom exchanged garlands and there was some social distancing between the couple.

At the wedding, there were only a few guests. Due to Coronavirus, no friends had been invited. The minimal guests at the wedding then applauded the couple and threw flowers over them.

Following the wedding, the newly married couple urged citizens to abide by the lockdown rules.

In addition to these weddings, there have been those where grooms have used simple modes of transport to escort their brides home such as on motorbikes and bicycles. Whereas, usually this is a big affair.

Hence, once again showing the reduction of wedding traditions being practised as well.

Currently, there is no indication when lockdowns and social distancing will fully end amid the Coronavirus pandemic. Thus, meaning that it is unlikely that Indian weddings will return to their ‘big fat’ status too quickly.

Therefore, it is hoped that with this enforced trend of smaller and simpler Indian weddings taking place that families follow suit for future weddings using them as an example.

Hence, encouraging less pressure on the family that has to pay for the wedding, usually the girl’s side, and focusing more on the union of two people in its more humbled form.

But there will still be those who are happy spending lakhs despite the new ‘norm’ post the Coronavirus pandemic because for them, the wedding is not going to be a wedding unless it is ‘big’ and ‘fat’.

Dhiren is a journalism graduate with a passion for gaming, watching films and sports. He also enjoys cooking from time to time. His motto is to “Live life one day at a time.”
Creative Black Country reveals COVID-19 Challenges on Arts
5 Art Mediums to enjoy during Lockdown