In tribute of late Bollywood filmmaker, Yash Chopra, new fashion label Diva’ni was launched on his 81st birthday. Yash ji’s favourite heroines were joined by Shahrukh Khan on the runway.

"I thank Yash Chopra from the bottom of my heart to present me in a beautiful manner in his films."

In honour of the great late Yash Chopra on his birthday, B-town came out in full force to pay their humble respects to a true legend of Indian cinema.

The tribute which took place on September 27, 2013, also saw the unveiling of Diva’ni, which is Bollywood’s first ever fashion label. Diva’ni has been launched in a collaborative effort by Yash Raj Films (YRF) and Karol Bagh Saree House (KBSH). 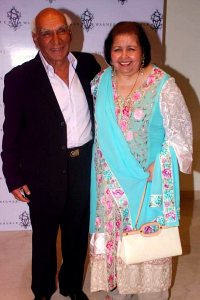 The label showcases the best of Bollywood diva fashions, for the public to enjoy. It’s purpose: to unleash the Bollywood diva in every woman. From Kajol’s beautifully sizzling sarees in ‘Suraj Hua Madham’ from blockbuster hit, Kabhi Khushi Khabie Gham (2001), to Priyanka’s liquid gold number in ‘Desi Girl’ from Dostana (2008).

Most of the collection will feature iconic designs from Yash ji’s own movies, outfits that have already created trends across the globe amongst Bollywood loving fashionistas.

Speaking about the launch of the fashion label, YRF’s Vice President (Licensing and Merchandising), Rohit Sobti said: “YRF has been looking to participate in a meaningful way in the apparel category, in order to bring the trends of Bollywood and YRF closer to the consumers.

“As an industry, we have been setting fashion trends for our fans worldwide over the last 100 years. Development of the brand Diva’ni is a most significant effort by any Film Studio in the world and KBSH is an ideal associate in helping us achieve our goal.

“With KBSH’s long-standing expertise in creating high quality designs, and always at the forefront of changing fashions over the years, we are sure that they will bring the requisite skill sets for this venture to succeed.”

Without a doubt, Yash ji’s ability to create the most romantic of scenes in any storyline forms the inspiration behind the collection. The clothing combines elegance, style and glamour, something that Yash ji envisioned in each of his Bollywood heroines. 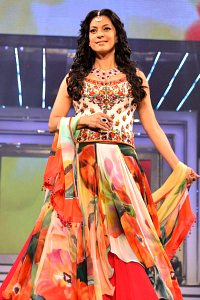 Front and centre, and undoubtable showstopper, was King Khan himself who, having acted in countless Yash ji films, has the filmmaker to thank for his hero persona that made him the ‘King of Romance’ and brought him worldwide stardom.

As part of the tribute, Madhuri and Shahrukh also re-enacted some memorable scenes from the supremely successful Dil To Pagal Hai (1997).

An extremely intimate affair, Pamela ji wrote the special invites herself to the Bollywood King and Queens and they all glamorously arrived to honour their favourite Director on his 81st birthday.

YRF spokesperson, Rafiq Gangjee said: “Pamelaji requested Shah Rukh to be part of this tribute to Yashji and he happily agreed to walk with all the divas as part of the grand finale.”

Shahrukh seemed to have all of Yash ji’s blessings on his side, as he was the only male actor to be requested by Pamela ji to take part in the tribute celebrations.

Shahrukh later tweeted: “Happiness & hugs walking the ramp with the lovely ladies i have shared the screen for last 22 years. got kinda emotional tonite.thanx girls.”

“As a person, he taught me creativity has to be fearless. You should make that film which your heart tells you to do. If it works then it’s good and if it doesn’t then also it is good. I am very fortunate that I worked with him for 20 years.”

“I am the one actor who starred maximum in his films from the time I joined to his last venture. I am lucky to have the opportunity to have worked with the most fearless filmmaker that the country will ever have.” 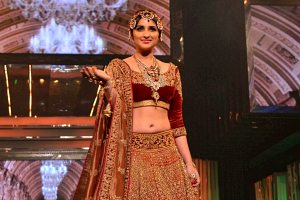 Yash ji’s heroines also paid their respects on the ramp with sultry vixen, Rekha saying: “I thank Yash Chopra from the bottom of my heart to present me in a beautiful manner in his films. We will miss you,” Rekha said wearing a beautiful golden pink saree for the occasion.

Rani dazzled in an intricately embroidered pink ghagra. She said: “I miss you Yash uncle. I feel sorry I couldn’t make a cake for you on your last birthday as I was busy with other commitments. I miss you everyday.”

It is thought that with the fashion label Diva’ni launched to the public, Yash ji’s glamorous vision as the creator of beauty and romance will never be forgotten.

Aisha an English literature graduate, is a keen editorial writer. She adores reading, theatre, and anything arts related. She is a creative soul and is always reinventing herself. Her motto is: “Life is too short, so eat dessert first!”
Fashion Pakistan USA 2013
Highlights of London Fashion Week Spring/Summer 2014