Genelia D’Souza and her husband Riteish Deshmukh appeared on ‘Pinch’ where she reacted to being called a “cheap, vulgar aunty”.

Genelia D’Souza has reacted to being called a “cheap, vulgar aunty” by an internet troll.

The Indian actress appeared on an episode of Arbaaz Khan’s Pinch with her husband Riteish Deshmukh.

A promo video of the couple was released.

In it, Riteish and Genelia address a viral video where she is seemingly rolling her eyes at a conversation he is having with fellow actress Preity Zinta at a red carpet event.

One troll had commented about Genelia:

“Doesn’t suit your age and face especially when you’re married and got two kids dadi amma.

“Even kids will be shocked and embarrassed with all your overacting. They’ll be like, ‘Even we don’t act anything like this’.”

She replied: “I don’t think he’s having a good day at home.

Speaking of trolls, Riteish stated that it is something celebrities should expect. He said that they must develop thick skin as they decided to become public figures.

He added: “It’s okay for people to comment because you are putting yourself out there. I don’t think there is a need to take offence.

One person commented on the promo video:

“It is his fault. He should focus on his wife more.”

“Well, even I want that, you focus on your wife and not mine.”

Preity Zinta had reacted to the video earlier in 2021 by commenting:

“This is too funny… Riteish and Genelia. Keep them coming. Love you both.”

Genelia and Riteish first met during the making of their 2003 romance film Tujhe Meri Kasam, which was both of their debut films but they did not speak much as she thought he would be a spoilt brat.

However, the actress later discovered this was not the case and they soon began dating.

The couple were married in 2012 and now have two children together, Riaan and Rahyl.

Reading comments made by trolls is a regular segment of Pinch and celebrities such as Salman Khan, Ananya Panday, Ayushmann Khurrana, Tiger Shroff and Kiara Advani have appeared on the show.

The full episode featuring Genelia D’Souza and Riteish Deshmukh will air in India on Thursday, September 30, 2021. 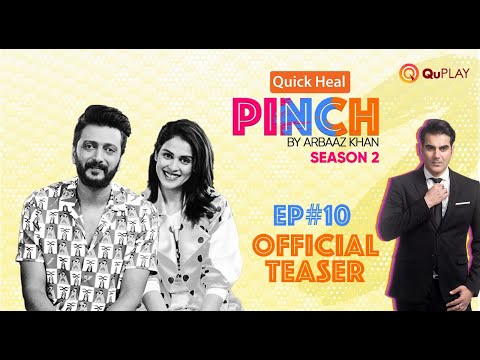 Naina is a journalist interested in Scottish Asian news. She enjoys reading, karate and independent cinema. Her motto is "Live like others don't so you can live like others won't."
Kartik Aaryan trolled for ‘Bhool Bhulaiyaa 2’ Poster
Rhea Chakraborty entering Bigg Boss 15 for Record Fee?