A spouse or partner from a non-EU country in a relationship with UK citizen will have to do an English language test before being accepted into the country. The new Government ruling will be in place by Autumn 2010.

Non-Europeans planning to come to the UK for marriage or to live with their partner will have to take an English language test before their receive a visa. The requirement originally to be introduced in 2011 by the previous Labour government has been brought forward by the current Conservative led government.

From Autumn 2010, anyone wishing to come to Britain as a partner will need to demonstrate basic English at A1 level, the same level required for skilled workers admitted under Tier 2 of the points-based system.

The new rules will apply to anyone applying as the husband, wife, civil partner, unmarried partner, same-sex partner, fiance(e) or prospective civil partner of a UK citizen or a person settled in this country. They will be compulsory for people applying from within the UK as well as visa applicants from overseas. 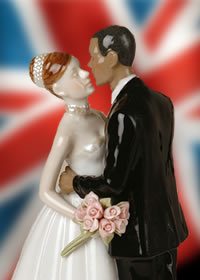 The aim is to crack down on so called ‘sham weddings’ in the UK. An Immigration Service source has revealed that hundreds of weddings take place in the UK where the supposed happy couple can’t speak a word to each other. Due to lack of language skills or any understanding of the environment they live in. Many of these weddings a purely taking place to allow immigrants to get residency in the UK via the use of marriage. This includes UK women or men agreeing for financial gains, or women forced to agree to marriages of this kind, to ‘help someone through to Britain.’

Hundreds of thousands of migrants are thought to have married EU nationals just to stay in Britain. Gangs charge up to £10,000 to arrange the weddings. The crackdown on marriage scams is a top priority and set to be enforced immediately.

For example, arrests were made at the Oxford Register Office at around midday on 8 June 2010, where, the would-be bride, a 19-year-old Polish national, and her groom, a 30-year-old Indian male were caught before the ceremony started by the Thames Valley Immigration Crime team who acted on intelligence. Two witnesses, a Polish female and a British male were also arrested on suspicion of assisting illegal immigration. The 30-year-old Indian male was charged with two counts of perjury.

Theresa May, the Home Secretary said, “I believe being able to speak English should be a pre-requisite for anyone who wants to settle here. The new English requirement for spouses will help promote integration, remove cultural barriers and protect public services. ”

“It is a privilege to come to the UK and that is why I am committed to raising the bar for migrants and ensuring that those who benefit from being in Britain contribute to our society.”

The Home secretary revealed that this was the first step towards more tighter rules across the visa system in the future to ensure that immigration is properly controlled for the benefit of the UK.

The new plans mean a spouse coming from outside Europe must provide evidence they have passed an English language test by an approved provider. Visa applicants in these circumstances must already meet a range of criteria before being allowed to enter the UK under current rules. 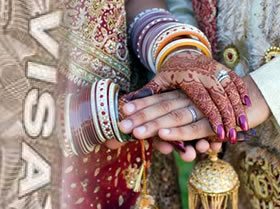 Whether they have married in the UK or overseas (or not at all), the non-UK partner must apply for a two-year settlement visa to come and live in the UK as a husband, wife, civil partner, unmarried partner or same-sex partner. At the end of the two years, they can apply to the UK Border Agency for permission to settle in the UK (known as ‘indefinite leave to remain’ or ‘ILR’). All applicants must show their marriage or partnership is genuine and that they can support themselves financially.

Partners who apply for settlement after completing their two-year period of temporary residence will still need to meet the ‘knowledge of language and life in the UK’ test. This is in addition to the new basic English language requirement, which forms part of their initial application.

The announcement from the Government’s UK Border Agency has attracted criticism from civil liberty groups, lawyers and activists. Hina Majid, from the Joint Council for the Welfare of Immigrants said, “Forcing husbands and wives to take language tests before they even arrive in the U.K. will rip families apart.” Since the new regulation targets non-EU nationals, she added, “These new rules are likely to hit people from South Asia and Africa, where English is not the main language. It may also hit women harder and discriminate most against the poorest.”

Amit enjoys creative challenges and uses writing as a tool for revelation. He has major interest in news, current affairs, trends and cinema. He likes the quote: "Nothing in fine print is ever good news."
Karma Nirvana forced marriages roadshow
Temporary limit on UK Immigrant workers