A viral picture has prompted speculation that Diljit Dosanjh may be collaborating with Imtiaz Ali and AR Rahman.

"What's cooking between you three?"

Diljit Dosanjh shared a picture with Imtiaz Ali and AR Rahman, leading to speculation that the trio might be working together.

The entertainer’s two films in 2022 have provoked contrasting reactions from the audience.

While Jogi is leaving the audience in tears, Babe Bhangra Paunde Ne is making them laugh.

According to his fans, Diljit has now hinted at his next project.

The Punjabi star took to Instagram to share a series of pictures with filmmaker Imtiaz Ali and renowned composer AR Rahman.

In the photos, Imtiaz is seen in a dark orange shirt and blue jeans. Meanwhile, AR Rahman sports a grey suit and Diljit wears a black t-shirt. 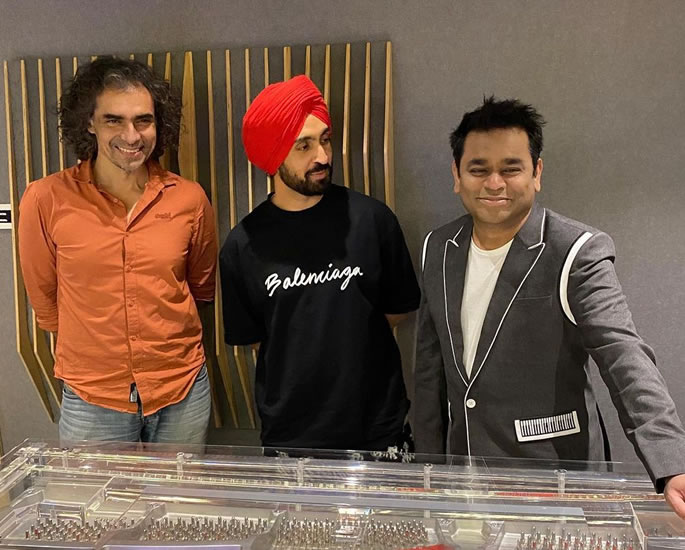 He did not explain why the trio were together but many fans believed they will be working together.

One person said: “Looks like great news in the making! Love you Diljit.”

Another wrote: “New movie on the way.”

A third asked: “What’s cooking between you three?”

Some thought they will be collaborating on a biopic of Punjabi singer Amar Singh Chamkila.

Another person said: “Next movie with Imtiaz sir on a story of Chamkila’s real life.”

Rumours surrounding the Chamkila biopic have been rife for some time.

It is believed that Imtiaz Ali will be directing the film while AR Rahman will be providing the music.

It is also reported that Diljit and Parineeti Chopra will star in the film.

According to reports, filming will begin in October 2022, however, no announcement has been made.

Other social media users felt that Imtiaz was actually working on Rockstar 2 and had roped in Diljit Dosanjh.

Imtiaz Ali directed the 2011 film and it starred Ranbir Kapoor and Nargis Fakhri.

Another stated: “I call Rockstar once more.”

Although there was a lot of speculation about a potential collaboration, many were just excited to see the trio together.

One dedicated person loved the photos so much that they actually had the pictures printed out, writing:

“This photo was printed and brought, all my favourites together.”

The comedy is directed by Amarjit Singh Saron and also stars Sargun Mehta.

Dhiren is a journalism graduate with a passion for gaming, watching films and sports. He also enjoys cooking from time to time. His motto is to “Live life one day at a time.”
Is Sumbul Touqeer Khan looking for Love on Bigg Boss 16?
Fawad Khan breaks silence on Bollywood Comeback Chances