Actress Dia Mirza shared a black and white image of her baby son Avyaan. The actress and her husband welcomed their newborn on May 14, 2021.

“Avyaan, you have taught us humility, grace, and power"

The Indian model and actress, Dia Mirza shared another picture of her baby son Avyaan via Instagram on September 17, 2021.

The photo shows the mother carrying Avyaan in her arms, while he rests his head on Dia’s shoulder.

The photo was captured in Dia’s living room but the actress added a sketchy black and white filter.

Avyaan was born prematurely on May 14, 2021, and had to spend two months in the newborn intensive care unit (NICU).

In the Instagram caption, Dia thanked the doctors and medical staff who looked after her and Avyaan:

“We are deeply grateful to many good people who took very good care of you Avyaan in the first 4 months of your life.

“Dr Hari, Dr Jui, Dr Pradeep, Dr Anish and all the nurses and @suryahospitals under the able leadership of Dr Awasthi and Dr Kabra.

“We will be forever grateful for the care and love you received from all of them.” 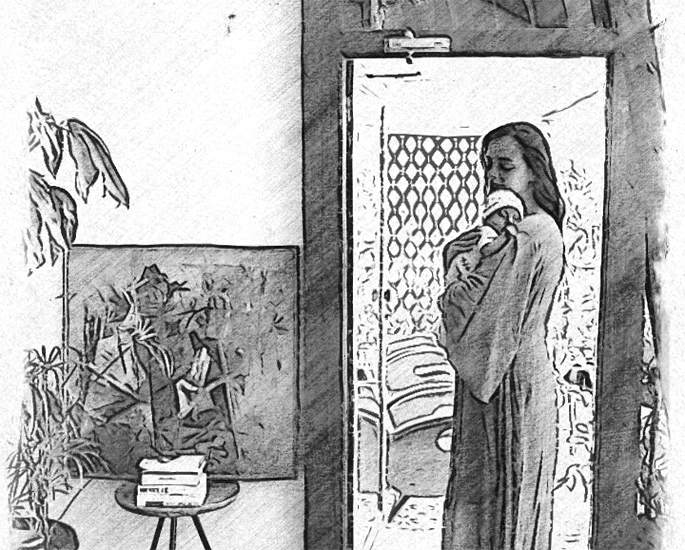 Dia also shared a message for her son:

“Avyaan, you have taught us humility, grace, and power of prayer. Stay blessed baby. You complete us in every way.

“All our family and friends this time would not have been half as comforting without your strength and prayers. Thank YOU all. You know who you are.

“Have to add, to all the parents out there who are coping with their premies being in NICU, love, strength and prayers for you and your little ones.”

Actress Sonali Bendre had a welcoming note for the baby, as she wrote:

“Welcome home baby Avyaan, god bless you… lots of love Dee to you and your family.”

Earlier on August 12, 2021, which is  World Elephant Day, Dia gave her fans a first glimpse of Avyaan sharing a picture of him via an Instagram story.

Wearing a white onesie with elephants all over, she captioned it:

The Thappad (2020) star got married to businessman Vaibhav Rekhi in February 2021. She announced her pregnancy after the couple returned from their honeymoon in the Maldives.

Dia gave a shout-out to her ex-husband, producer Sahil Sangha on September 15, 2021.

She took to her Instagram story, wishing him luck as he announced the launch of his production house, Madiba Entertainment.

The ex-couple has previously founded a production house, Born Free Entertainment, together. Dia made her Bollywood debut with Rehnaa Hai Terre Dil Mein in 2001.