Bollywood actress Dia Mirza has tied the knot with Vaibhav Rekhi, a Mumbai-based businessman in an intimate ceremony in Mumbai.

The pair had a low-key wedding ceremony in front of family and close friends.

After the wedding, the newly-married couple were pictured together for the first time as they posed for the paparazzi waiting outside the wedding venue in Bandra, Mumbai.

For the wedding, Dia went for a red saree with gold detailing. She also opted to keep her jewellery to a minimum by wearing a choker, a red bindi and a gold maang tikka.

Meanwhile, Vaibhav contrasted his bride with an all-white outfit and gold turban.

During their photos, Dia even distributed sweets to paparazzi. 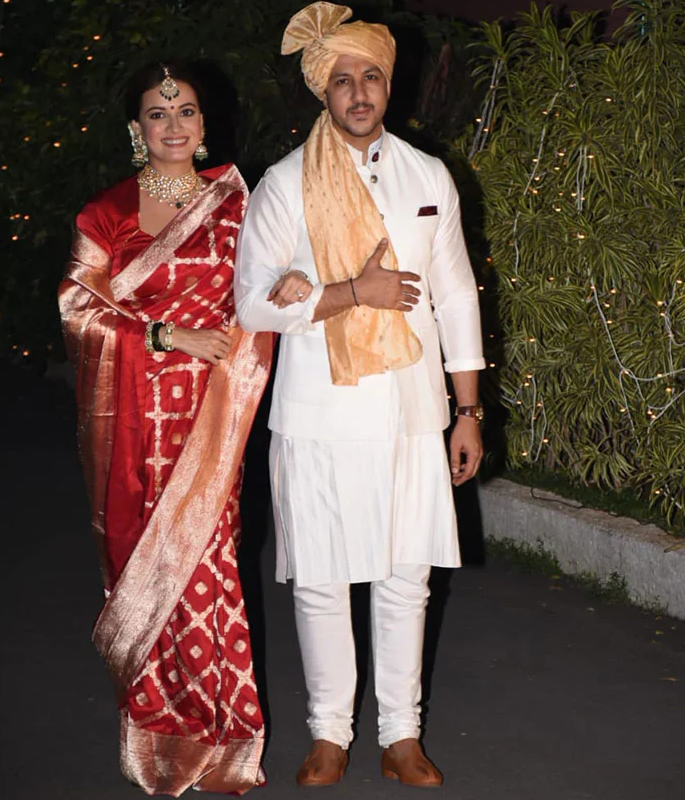 Prior to the wedding on February 15, 2021, Aditi Rao Hydari was seen arriving at the wedding.

In an Instagram story, she declared herself as Team Groom.

Dia also shared a glimpse of her Mehendi ceremony.

The actress’ wedding celebrations began on February 13 with a bridal shower, which also acted as a pre-wedding party.

“Welcome to our crazy family, Dia Mirza. We all love you.”

The venue was decorated with white flowers and glittery sequins.

Around 50 guests attended and it was reported that celebrities Malaika Arora and Rajkumar Hirani were part of the guest list.

A source said: “The wedding is happening in the evening today in her building’s garden.

“Dia and Vaibhav are both extremely excited about their big day and her friends including director Rajkumar Hirani, Malaika Arora and Zayed Khan are expected to attend.” 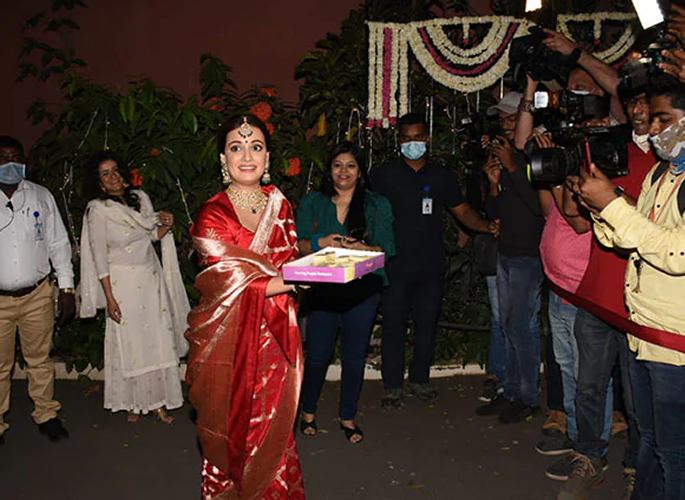 It had been reported that Dia and Vaibhav had been dating for a while, however, the actress remained quiet about her personal life.

A report had stated that the pair were set to get married.

“The wedding will take place in the next two days on February 15th and is going to be a very low profile function.”

“The rituals and the wedding is going to be an intimate affair and only close family and close friends will be seen in attendance.”

The pair got married in October 2014 after dating for a number of years. However, they announced their separation in August 2019.

In a statement, they said: “After 11 years of sharing our lives and being together, we have mutually decided to separate.

“We remain friends and will continue to be there for each other with love and respect.

“While our journeys may lead us down different paths, we are forever grateful for the bond that we share with each other.”

Since her marriage to Sahil ended, Dia has not spoken about her personal life but she has now married Vaibhav.

Dhiren is a journalism graduate with a passion for gaming, watching films and sports. He also enjoys cooking from time to time. His motto is to “Live life one day at a time.”
Alia Bhatt to star in Shah Rukh Khan’s production ‘Darlings’
Amitabh Bachchan completes 52 Years in Film Industry