We look at what to expect from futuristic role-playing game Cyberpunk 2077 and why it is arguably the most anticipated game of 2020.

Night City has a gritty scenario set among the bright neon lights.

Based on the tabletop role-playing game, gamers have been waiting on the new title ever since it was first announced in 2012.

However, it did not enter pre-production until the completion of The Witcher 3: Wild Hunt – Blood and Wine.

But players do not have to wait too long now after the developers CD Projekt Red released a third trailer at E3 2019 which revealed that Cyberpunk 2077 will release on April 16, 2020.

Cyberpunk 2077 is vastly different from its developer’s Witcher series.

The medieval-like setting filled with mythical creatures is gone and instead, the landscape is surrounded with neon skyscrapers and bionic enhancements. The dystopian setting of Cyberpunk 2077 draws influences from the 1982 sci-fi film Blade Runner.

While that is a massive contrast, the upcoming release will also be an immersive Role-Playing Game (RPG).

Featuring customisation, a first-person perspective, an open world and Keanu Reeves, this game is one that players are eagerly awaiting.

It comes out on PS4, Xbox One, PC and Google Stadia. It is also possible that it will release on the next-gen consoles once they release.

We explore the game’s features in more detail to see why it is arguably the most anticipated gaming release of 2020. 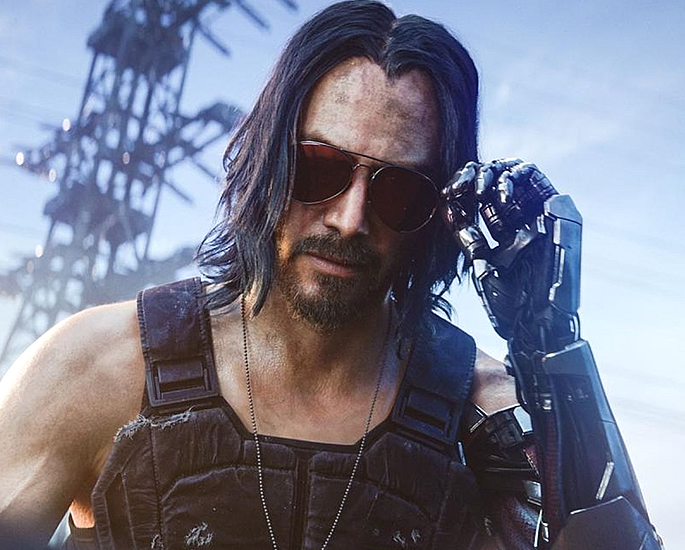 As with many upcoming video games, details about the story remain scarce which makes any surprises all the more unexpected.

The game is set in Night City in the Free State of California. It is controlled by corporations and unassailed by the laws of both country and state.

Those looking to gain authority are embroiled in violent gang wars and to protect themselves, citizens openly carry firearms.

While that is one aspect of the story, one of the biggest announcements was that famed Hollywood actor Keanu Reeves was revealed to play a character named Johnny Silverhand.

He is embedded in a biochip that is located in the main character’s brain.

In order to uncover more about the biochip, Silverhand will guide you to Alt Cunningham, the most legendary NetRunner ever. She may be dead but her consciousness lives on the web.

Players must do whatever it takes to track her down. This may include befriending or killing gang leaders in Night City.

Johnny will offer hints and tips throughout, almost like a technological conscience.

Keanu Reeves plays a huge role which came to fruition after the actor’s enjoyment of playing the role led to him convincing the developer to make Johnny a bigger presence. 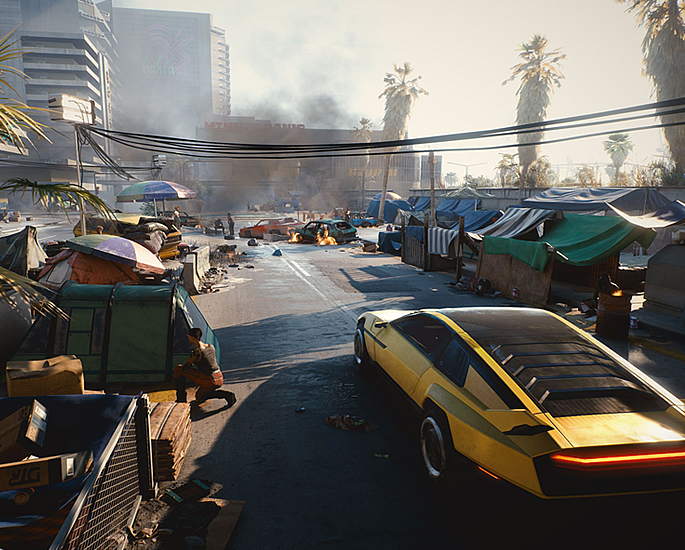 Cyberpunk 2077 takes place in the fictional city of Night City where all types of corporate subordinates and punks wander the previously mob-ruled streets.

However, by 2023, corporations are warring for them. The game shows the aftermath of that war.

Night City has a gritty scenario set among the bright neon lights. It all comes to life thanks to the excellent crowd simulation.

Hundreds of characters will be seen on the streets walking, talking, playing and fighting. It truly is a dynamic and realistic environment.

The city is massive, featuring six districts which span the entire spectrum of social class from great wealth to extreme poverty.

At the top is City Centre, which is surrounded by huge corporations competing against one another.

However, at the bottom is Pacifica, which has been partially abandoned and is overrun by gangs.

From the industrialist Santo Domingo to the affluent suburbs of Heywood, each district is unique and brimming to life. But to make the most of exploring Cyberpunk 2077‘s world, gamers will have to explore vertically.

To get to each district, vehicles are available which you can drive in either first or third person. Autonomous cars also allow the player to focus more on combat than driving.

It is an immersive and smoothly-run environment to house such a detailed and futuristic RPG. 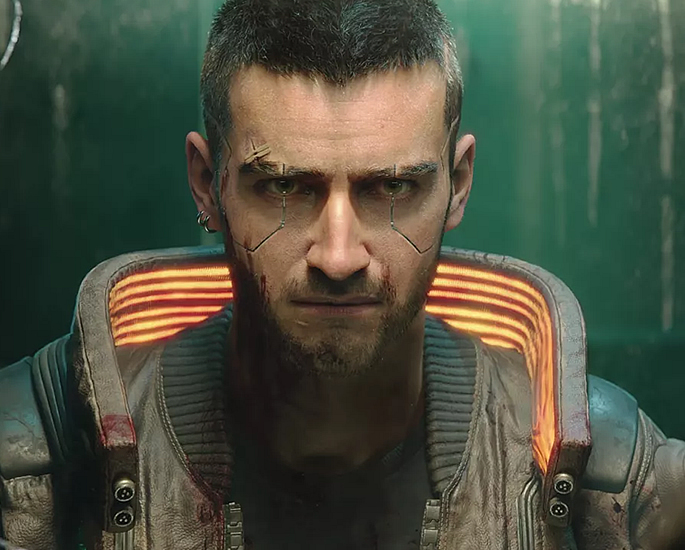 One part of the game which enthusiasts are looking forward to is the customisation aspect.

You take control of a mercenary named V but the character is entirely customisable. Players will be able to customise V’s facial features and body.

Choosing the types of clothing will alter interactions between V and other characters, with whom they have the potential to form romantic relationships.

Gender is also customisable and that can have an influence on the entire story. V’s background will also have an effect.

Players can choose from Nomad, Corpo or Street Kid. Each backstory, known as Lifepaths, will provide their own origin story and starting location on the map.

Each Lifepath will unlock unique dialogue options that can change how quests play, so it is an important decision to make from the start.

Character classes include NetRunner (hacking), Techie (machinery) and Solo (combat). Skills and abilities are allocated based on your preference and can be upgraded.

Character customisation remains throughout Cyberpunk 2077 and it even includes weapons.

Having a fully customisable character means that every gamer will have a unique experience of the game. 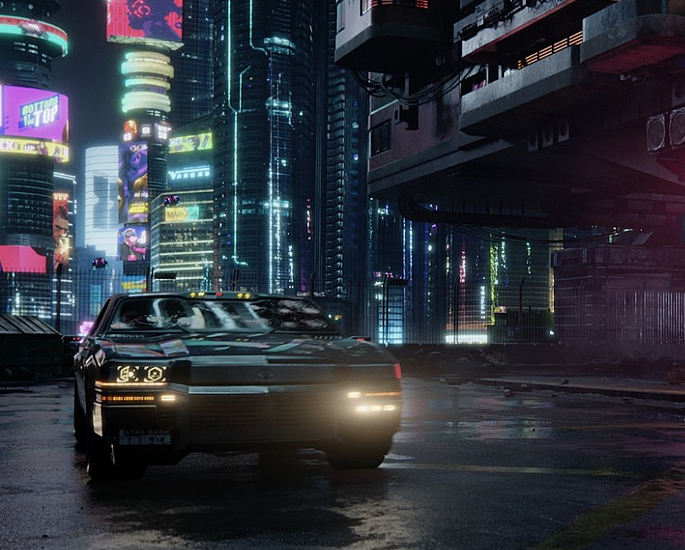 The first-person RPG features action taking place on futuristic streets which makes for fast-paced gunplay. But it is not all about shooting. Exploration, hacking and engineering skills naturally blend with dialogue.

Even though shooting your way through the story will be more fun, it is possible to complete Cyberpunk 2077 without taking a life, using non-lethal weapons and cyberware.

The inclusion of dialogue trees makes for interesting interactions with characters during quests and exploration.

Completing main quests results in experience points while side quests will hand out “street cred” and unlock new skills, places and additional quests.

Characters known as Fixers will hand out quests and V will complete them with the help of various companions.

Failing a quest will not mean restarting it. Instead, the game carries on which can affect the game’s ending.

As well as quests and side quests, there are various minigames to enjoy like hacking, shooting ranges and martial arts.

Player choices affect the story but player morals are not a thing. Depending on V’s reputation, they will be treated differently.

“To complete it non-lethally you have to be very good at stealth.”

Unlawfully killing characters will lead to being noticed by Night City’s authorities but it depends on where you are.

Areas like Japantown will likely lead to police action but Pacifica may be a better place to commit unsavoury activities as it is already riddled with crime.

Cyberpunk 2077 looks to be one of 2020’s most exciting releases, featuring a customisable character which will ensure a different gaming experience for everyone.

It will also offer futuristic gunplay using a plethora of weapons coupled with the exploration of six diverse districts.

It already has high hopes so we can only wait and see what the excitement is all about when Cyberpunk 2077 releases on April 16, 2020.

Dhiren is a journalism graduate with a passion for gaming, watching films and sports. He also enjoys cooking from time to time. His motto is to “Live life one day at a time.”
Best-Selling Video Games from 2005 Onwards
Final Fantasy VII: A Remake to Look Forward To