Chief Inspector Manjit Atwal recalls how her family wanted the best for her but were initially worried about her career in the police.

"their initial concern has given way to parental pride.”

As a valued member of the British Police force, Chief Inspector Manjit Atwal says her parents were initially concerned when she joined the police, but that they were won over when they saw her succeed and thrive in the job.

After 26 years in the force and with numerous awards under her belt, she knows from experience that concerns turn to pride when you stick to your beliefs and follow your dreams.

Manjit joined the police later in life whilst bringing up two children.

She says: “I had always wanted to make a difference in the community, but I didn’t think I was tough enough mentally or physically, to work in policing.

“My initial reservations about not being strong enough for the job were dispelled with the training I received and once I wore my uniform, I no longer had those fears.”

Manjit’s career has involved working in 18 different areas of policing.

Manjit is also a nationally trained hostage and crisis negotiator.

More recently, she has been working on the national violence against women taskforce with the College of Policing.

Manjit, who works in local policing, believes family or community concerns come from a loving place.

She says: “Your family will always want the best for you and that tends to be where concerns stem from.

“Once they understand the difference you are making to the community and see that you are happy in your chosen career path, most likely, their worries will dissipate.

“I am pleased to say that their initial concern has given way to parental pride.” 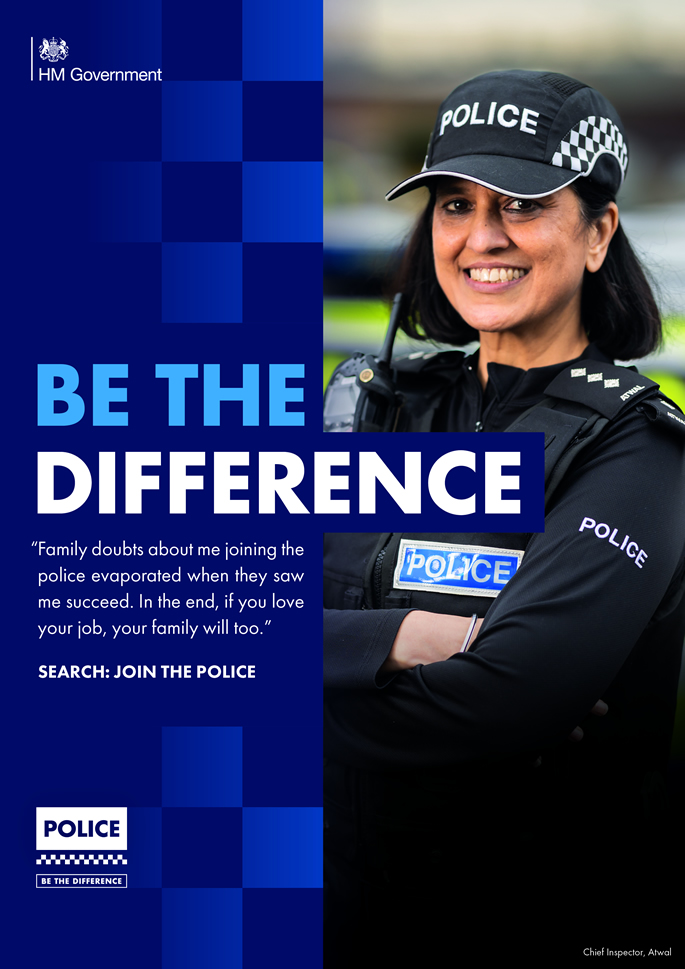 The Chief Inspector went on to say that her cultural background has been a huge asset when it comes to serving her community.

Manjit continues: “I believe that having a diverse police force which is reflective of the people being served improves effectiveness.

“My Sikh background helps to break down barriers as I am able to help others around me to understand cultural differences.”

She adds that this helps “build trust and bring communities closer together”.

While family and community support is important to her, it is the challenging and rewarding nature of police work that keeps Manjit motivated.

She elaborates: “Being a police officer has helped me to grow as a person.

“It has enabled me to see and experience things people wouldn’t normally see in other jobs. I still pinch myself about the fact that I am in a job that I love so much.”

Be one of the 20,000 new officers. Be part of the team. Be the difference. Visit: joiningthepolice.co.uk.