Cheerleaders to cover up?

The Indian Premier League has not only made news for the huge investments, celebrity endorsements and the great cricket but also for one visual aspect of the 20/20 games – the cheerleaders. The cheerleaders who have been flown in from many countries to perform dance and cheering acts for the various teams have caused a […]

The Indian Premier League has not only made news for the huge investments, celebrity endorsements and the great cricket but also for one visual aspect of the 20/20 games – the cheerleaders.

The cheerleaders who have been flown in from many countries to perform dance and cheering acts for the various teams have caused a stir amongst politicians and women’s groups in India. Complaints have risen regarding their minimal dress sense and dance moves from these groups. Stating that they are ‘obscene’ and ‘vulgur’, indicating that they are not acceptable for Indian culture and morality.

Many believe they add nothing to the precious game of cricket and are lowering the standards of this huge phenomenon in India. Celebrity politicians such Shatrughan Sinha of the BJP (Bharatiya Janata Party), the opposition party, stated that the cheerleaders are mocking the game. 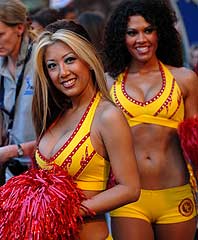 In a country where woman and culture bind strongly this western twist to the game is being slammed. Most of these groups would like to see them banned from games stating that they do not promote Indian culture in any way. Others are requesting that they cover up and wear more suitable clothing.

Further to these protests, security has been increased for the cheerleaders by the teams. The Cheerleaders themselves have complained about the high number sleazy comments and approaches they have had whilst performing. Something perhaps they were not fully expecting, coming from the other countries where they are readily accepted as ‘part’ of a game.

The Mumbai police are monitoring the cheerleaders further to the complaints against them to ensure they are not breaking any entertainment licence rules. Mr Ram Rao Vagh the Police Commissioner for the Mumbai Police has stated that policing such a matter is not easy and as long as the entertainment licence rules were not broken by the dancers no action would be taken.

However, many others support the move to introduce such glamour into the game and say they are no different to Bollywood actresses wearing skimpy clothing in films screened and openly watched all over India and dancers on music videos on television. A lot of the supporters feel politicians do not have right to dictate on the matter. Many feel that once the teams start play the cheerleaders are no longer the focus of a game.

In support, Kolkata Knight Riders, owner and bollywood actor Sharukh Khan has stated he sees nothing negative about the cheerleaders

In a move to calm some of the protests, the 14th IPL game at Nerul between Mumbai Indians and Hydrabad introduced a more restrained approach to cheerleader dress sense, wearing blue lycra bodysuits and also included male dancers too. So, does this mean that other teams will follow suit and get their cheerleaders to cover up?

This aspect of the IPL is going to be a good test to see how the cultural attitudes and standards defend themselves against the new wave of Indian entertainment using cricket with a splash of western flavour.

Amit enjoys creative challenges and uses writing as a tool for revelation. He has major interest in news, current affairs, trends and cinema. He likes the quote: "Nothing in fine print is ever good news."
IPL the new face of Cricket
Harbhajan banned from IPL and 5 ODI’s