A care home in Australia has been criticised after footage showed nurses having a Bollywood party and dancing with residents.

"This isn't fair for the families of the residents."

A care home in Melbourne, Australia has been criticised after footage emerged of nurses enjoying a Bollywood-themed party and dancing with elderly residents.

The event showed staff and residents dancing and mingling closely together. Staff at AdventCare Whitehorse in Nunawading were seen without masks or gloves.

It was reported that the event was for a staff member’s birthday.

Women were seen dressed in long colourful outfits and dancing at the Bollywood-themed party as residents watched.

Dancers are seen talking to the residents, holding their hands and getting close to them with no PPE.

The footage was posted to TikTok with the caption:

“Would have been great if we weren’t in Stage Four lockdown. There was no social distancing at all and hardly anyone wore face masks.”

It was reported that workers were told not to post anything on social media.

The caption read: “One resident was sad because they can’t see their families at all and this happened.

“Residents there are already at high risk. This isn’t fair for the families of the residents.”

Deputy Chief Medical Officer Dr Nick Coatsworth said the footage was “troubling” but said staff were likely trying to give residents “a bit of respite”.

He said: “We can’t have any exceptions to the rules, particularly in aged-care and PPE – it absolutely has to be used.

“The masks have to be used during all interactions. That’s the Health Department guidelines and that is protect the residents from staff bringing the virus in.”

Dr Coatsworth said the virus usually gets into care homes from staff.

He added: “I’m sure there will be appropriate reflection on whether that was the right thing to do and management will be looking closely at that.” 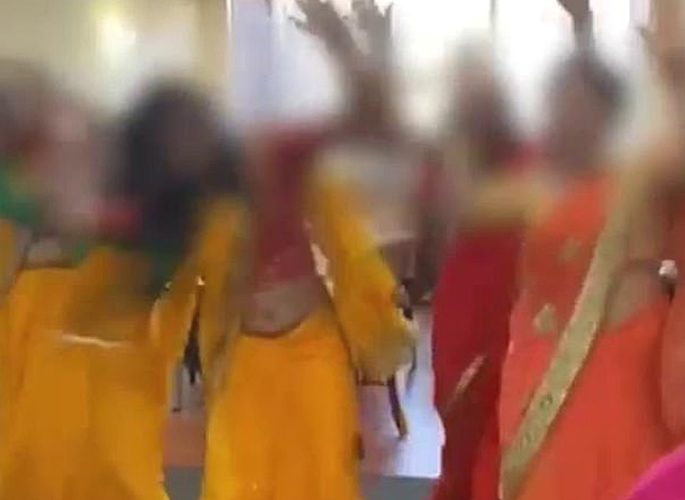 AdventCare CEO David Reece defended the party, saying that everyone was a staff member or resident.

He acknowledged that no one was wearing PPE but insisted it was put on immediately afterwards.

However, Premier David Andrews thought the removal of PPE was inappropriate.

He said: “I am not here to quarrel with the CEO of that facility but I have seen comments from him talking about the fact that it was a closed event and only people who lived there and work there was involved.

“Frankly, staff do not live there, they live in the community and we have community transmission so I do not know that is the best rebuttal or defence.

“We all have to be vigilant and aged care is and will remain for the foreseeable future a high-risk environment.”

Mark Lobosco said his 93-year-old grandmother lives at the care home and is furious her health was put at risk.

He said: “(It’s) extremely irresponsible and shocking to be honest, thinking they’re in the best hands they could be in.

“If someone does become Covid-positive there’s blood on (Mr Reece’s) hands literally. He needs to be stood down.”

Mr Andrews added: “We do not run those places. I do not pay the staff, they are not accountable to me, but we will be checking and monitoring and making sure every aged care facility is as safe as possible.

“When the second wave is over, the virus will still be there, bubbling away and even one case in aged care facilities can be tragic.”

Watch a News Report on the Care Home Party

Dhiren is a journalism graduate with a passion for gaming, watching films and sports. He also enjoys cooking from time to time. His motto is to “Live life one day at a time.”
Man attacked Pregnant Wife with Sickle
Indian man seeks Police Protection from Abusive Alcoholic Wife