Rumours about the marriage of Alia Bhatt and Ranbir Kapoor have been ongoing since they confirmed their relationship. Are they due to wed in January 2020?

"It came to light that the card was fake"

One of Bollywood’s most loved couples, Alia Bhatt and Ranbir Kapoor is rumoured to tie the knot on January 22, 2020.

Ever since Alia and Ranbir made their relationship official, speculations regarding their marriage have been ongoing.

It comes as no surprise because many Bollywood celebrities settle down with their dearest partner.

Thus, fans are convinced that marriage is on the cards for Alia and Ranbir. It was also made apparent that Alia Bhatt has received blessings from Ranbir’s parents, Rishi and Neetu Kapoor.

The latest rumour in the mill is allegedly the wedding card of the couple. The image of the card has been making rounds on social media.

Yet, this card is just a hoax. When reading the card carefully, there are numerous mistakes. It comes to attention that Alia Bhatt’s name has been misspelt as ‘Aliya’.

The second noticeable mistake is the bride’s fathers name. Alia Bhatt is the daughter of Mahesh Bhatt, not Mukesh Bhatt who is her uncle.

Also, the Sagan date has been wrongly stated as the ‘22th’ instead of 22nd.

As a result of the uproar, this card caused, media personnel checked the authenticity of it by contacting a source close to the couple.

It came to light that the card was fake. 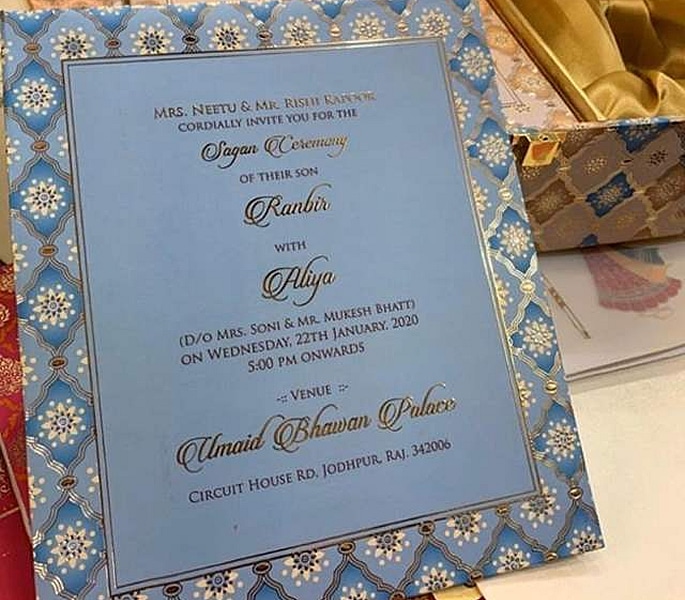 According to the couple they are happy with the way things are going and have no plans to take their relationship to the next level.

Despite this, many fans could not help but rejoice at the chance of a possible wedding between Alia and Ranbir.

Alia Bhatt will light up the big screen in her upcoming film Brahmastra (2020). The film has been described as a supernatural romantic drama. Her co-star will be none other than her boyfriend Ranbir Kapoor.

This will be the first time the duo have been paired opposite each other in their careers.

Amidst all the ongoing rumours surrounding the couple, fans will be eager to see their onscreen chemistry.

We look forward to the release of Brahmastra and potential confirmation of the union of Alia Bhatt and Ranbir Kapoor.

Ayesha is an English graduate with an aesthetic eye. Her fascination lies in sports, fashion and beauty. Also, she does not shy away from controversial subjects. Her motto is: “no two days are the same, that is what makes life worth living.”
‘Abusive’ Husband of Actress to Stay Out of Marital Home
Director and Cast share their ‘Hotel Mumbai’ Experience