As selfies become more popular, there’s now a new way to take them. Introducing AirSelfie, where drones can now take selfies for you.

this amazing drone captures all your photos mid-air

Need to get the perfect selfie, but a selfie stick just isn’t working? The AirSelfie drone, a portable flying camera, comes to your rescue.

The first of its kind, this amazing drone captures all your photos mid-air. You don’t need a stick anymore to take selfies. And you don’t have to miss out on that one person who captures shots of you and your friends.

What sounds so incredible till yesterday will become an outdated version tomorrow. Technology can bring such a drastic change in our lives.

AirSelfie is one such example and will revolutionise the way selfies have been snapped so far.

The master brain behind this incredible device is an Italian entrepreneur Edoardo Stroppiana. He came up with this idea of making a device to capture photos mid-air in summer 2014.

His team launched a Kickstarter campaign to raise funds and popularity for the device.

With over 2,700 backers from at least 80 countries, the project exceeded its original goal. The Airselfie team raised €500,000 for the unbelievable technology.

It took Edoardo almost three years to make his dream a reality. Finally, his revolutionising product is going to hit the market this summer 2017. 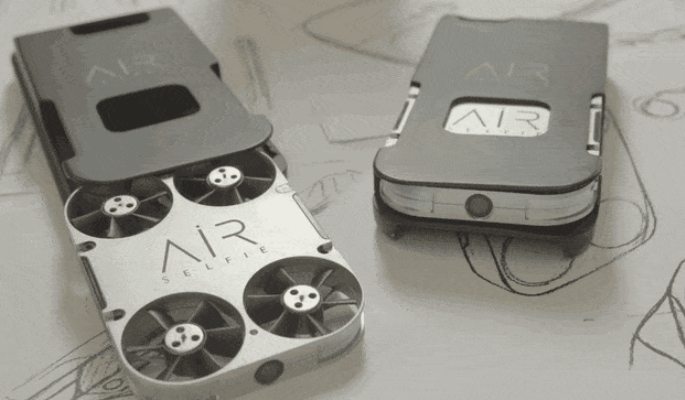 AirSelfie’s designers created the device with four rotors that help it fly up to 20 meters high.

Then, it can take an HD aerial shot or video with just a push of a button without missing a single detail in the background. Once you have taken the selfies, it lands safely in your hands.

The AirSelfie drone can be operated through your mobile by installing an application available on iOS or Android Play store. It’s user-friendly and very easy to use. So using this application, you make the drone take off and decide the direction and height at which it flies.

So, using this application, you make the drone take off and decide the direction and height at which it flies.

It is powered by a 260mAh 7.v built-in battery. The AirSelfie team says:

“You can recharge it by simply putting it back in its case in just 30 minutes of time since the Airselfie-case itself has been designed in such a way that it acts as a power bank with an inbuilt battery to recharge the device when you shove it back into it or you can use USB cable to do the same.”

AirSelfie ~ The Perfect Device for Selfies

The revolutionary tech comes with a 5-megapixel camera. Users can capture high definition photos and shoot videos. It also contains an inbuilt 4GB microSD card to store all your images.

The tech has three flight modes to monitor the AirSelfie with varying degrees of control. The most basic one is the Selfie mode in which users can make it move far or bring closer with just two buttons available on your phone’s screen.

Selfie motion control mode allows users to control the device with a virtual joystick provided by the application.

Rotating your phone into horizontal orientation gives the user access to Flight mode. This makes your phone a classic controller while the drone hovers. 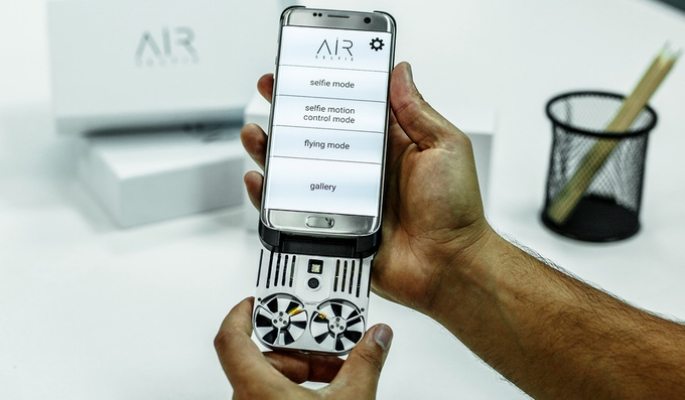 Like the timer option available in smartphones, the AirSelfie also provides the same feasibility, enabling users to activate the timer to take photographs.

This device uses self-generated Wi-Fi which allows users post their photos and videos straight onto social media. This works because all pictures and videos captured through AirSelfie will be directly sent to your smartphone via Wi-Fi.

Looks wise it appears smaller than your regular smartphone and weighs around 52 grammes. So it will fit into your pocket easily. You can carry it wherever you want. With the given features of its portability, AirSelfie is the lightest flying camera ever invented so far.

This mesmerising technological advancement in capturing photos is just jaw-dropping.

It makes taking selfies easier for whenever or wherever you want to chronicle all your moments with dearest ones. Or even when you are enjoying the moment all by yourself.

Images courtesy of AirSelfie via Kickstarter