A mass ceremony took place in Udaipur, India, on Sunday, September 8, 2019. As part of the ceremony, 51 couples got married.

"this tradition has helped us believe that marriage is a crucial part of life."

Fifty-one couples got married in a mass ceremony in Udaipur on Sunday, September 8, 2019.

The ceremony was organised for differently-abled and underprivileged couples.

Narayan Seva Sansthan, a charitable organisation for disabled people, hosted the mass ceremony in Smart Village, a place where thousands of physically challenged people are given a chance to stand on their own.

During the ceremony, 51 couples were part of the lifetime experience where they fulfilled customary rites in order to take a new step in their lives.

For 19 years, Narayan Seva Sansthan has been organising mass weddings for differently-abled and deprived couples. In the 19 years, they have successfully hosted 32 ceremonies.

Through these ceremonies, over 1,500 couples have got married.

The ceremony on September 8 was the 33rd and the organisation’s senior staff members, as well as city government officials, were present.

“As a human being, this tradition has helped us believe that marriage is a crucial part of life.

“Since 19 years, my father, Padma Shri Kailash Agarwal and I have been taking the mass wedding tradition forward to bring more couples to experience the same by hosting grand ceremonies.

“Even after organising 32 mass wedding ceremony, we are moving forward to increase the volume of couples across India.”

Fifty-one priests were at the wedding to perform the marriage rituals. Friends and families of the brides and grooms attended from all over the country. 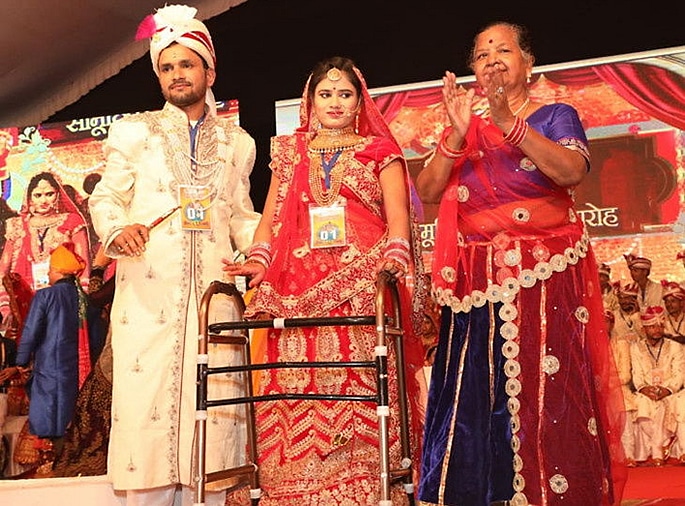 Mr Agarwal added: “To bring the disabled people into the mainstream of the society, we have launched some campaigns like free corrective surgery, vocational courses, providing free primary education, disabled mass marriage ceremony and disabled talent organising the show and other such efforts have been made.

All the couples enthusiastically participated in the celebrations.

The brides and grooms performed traditional rituals, put a flower garland around each other’s neck and received blessings from the elders.

Gunja and Jitendra were one of the 51 couples. They explained that they first met at school and now they are married.

Gunja said: “Narayana Seva Sansthan first helped me in the treatment of polio and now I have joined my life partner through its 33rd royal mass wedding ceremony.

Narayan Seva Sansthan has helped over 350,000 disabled people in the last 30 years.

The charity has provided them with full socio-economic support by aiding them with the best medical services, medicines and technology free of charge.

Dhiren is a journalism graduate with a passion for gaming, watching films and sports. He also enjoys cooking from time to time. His motto is to “Live life one day at a time.”
Financial Director jailed for Stealing £80k from Employer
Indian Man kills Mother for Not Allowing his Wife Back Home