A mass wedding ceremony took place in the Indian state of Madhya Pradesh. The procession saw more than 3,350 couples tie the knot.

More than 3,350 Indian couples got married in a mass wedding ceremony. The larger-than-life procession took place in the city of Chhindwara, Madhya Pradesh.

Every couple was seen dressed in their wedding clothes and sitting with each other in a massive venue.

Chief Minister Kamal Nath was present at the monumental event and stated that it was necessary for India’s survival.

He went on to say that India’s younger generation should get rid of social evils and soak up Indian values.

The mass wedding took place on Thursday, February 20, 2020, and Indian couples of all faiths attended. In total, 3,353 couples got married.

Representatives from the Golden Book of World Records attended the wedding to confirm whether or not the ceremony broke the record.

He explained that India’s diverse culture is the country’s biggest strength which is what makes it one of the greatest nations on earth.

Minister Nath said that it is the responsibility of the younger generation to remain intact with this characteristic and to prioritise the spirit of unity. 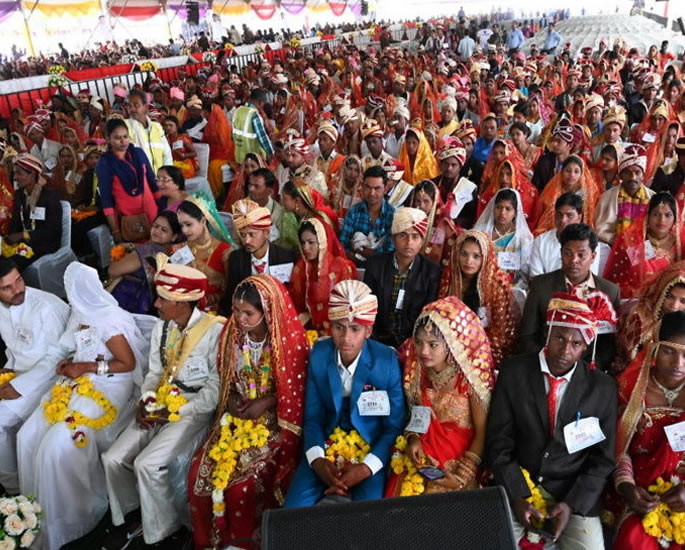 Afterwards, they confirmed that it was a world record and presented a certificate to Minister Nath on stage.

Mass weddings tend to be a common trend in India and usually have a deep, underlying message.

In one case, 51 couples got married at the same time in Udaipur in September 2019.

The ceremony was organised by a charity for differently-abled and underprivileged couples.

The organisation, Narayan Seva Sansthan, have been arranging mass weddings for 19 years.

In the 19 years, there have been 32 ceremonies and over 1,500 couples have got married.

The ceremony on September 8 was the 33rd and the organisation’s senior staff members, as well as city government officials, were present.

“As a human being, this tradition has helped us believe that marriage is a crucial part of life.

“Since 19 years, my father, Padma Shri Kailash Agarwal and I have been taking the mass wedding tradition forward to bring more couples to experience the same by hosting grand ceremonies.

“Even after organising 32 mass wedding ceremony, we are moving forward to increase the volume of couples across India.”

Fifty-one priests were at the wedding to perform the marriage rituals. Friends and families of the brides and grooms attended from all over the country.

Dhiren is a journalism graduate with a passion for gaming, watching films and sports. He also enjoys cooking from time to time. His motto is to “Live life one day at a time.”
Indian Student said ‘I love you’ to Molest Young Girl
Respected UK Surgeon Passes Away due to Rare Illness