Diamonds have an aura of mysticism around them and are an important part of a country’s culture. We look at 10 which originate from India.

The jewel is famous for a "curse" that comes along with it.

India has had a fascinating history when it comes to diamonds. They are the only country in the world to have discovered and possessed them until the 1800s.

As a result, their legacy forms a huge part of Indian culture.

Mines in India, especially Golconda and Kollur, are responsible for the discovery of many famous diamonds.

Though the exact year is unknown, it is said that the first known records of diamonds in India date back to the 4th century.

Many of the precious stones have become very famous around the world for a number of reasons.

A lot of these gems have been owned by royals or have been gifted to royals. They have even been seen in Hollywood.

Apart from the detailed cuts, the sheer size of some of these stones makes them very valuable and rare. We look at 10 Indian-origin diamonds in more detail. 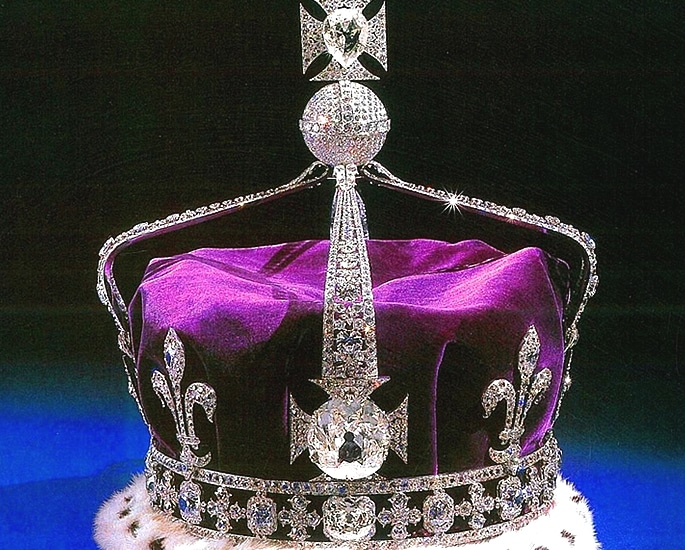 The Koh-i-Noor diamond is one of the oldest and most famous precious jewels in the world as its history goes back more than 5,000 years.

It is one of the largest cut diamonds in the world, weighing 105.6 carats (21.12g) though its true origins remain unclear.

The Koh-i-Noor is believed to have come from the Golconda mines in Andhra Pradesh. It is also impossible to know exactly when or where it was found.

The Koh-i-Noor has had a long and violent history which has only increased its reputation as one of the most well-known diamonds.

Various Mughal, Persian, Afghan rulers among others have owned the diamond, killing previous owners. It later belonged to Queen Victoria after the British conquest of Punjab in 1849.

Today millions of people visit the Tower of London to see the diamond where it is on display as part of the Crown Jewels.

However, the Indian and Pakistani government have claimed ownership of the Koh-i-Noor and have demanded it to be returned. The UK government rejected the claims and said it was legally obtained under the terms of the Last Treaty of Lahore. 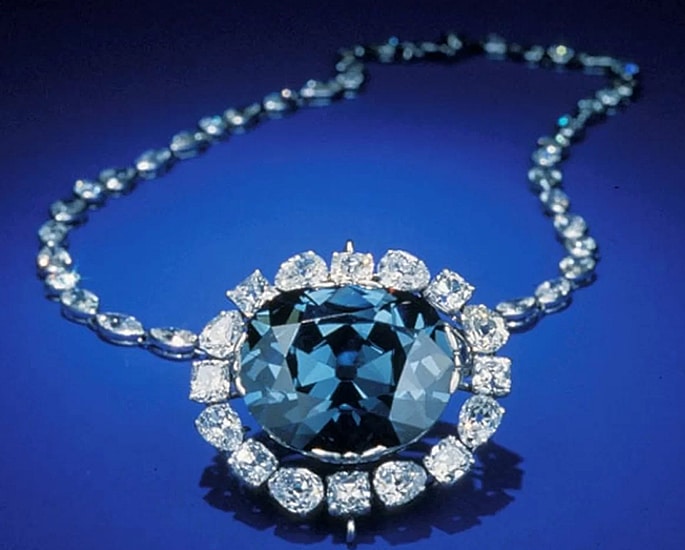 Like the Koh-i-Noor, the Hope diamond is a very famous jewel which has had owners dating back almost 400 years.

The jewel is believed to have originated in the Kollar mine, Andhra Pradesh in the 17th century. French gem merchant Jean-Baptiste Tavernier had written about the Hope and its origins.

Tavernier obtained the gem in India in 1666 when it was triangular in shape and crudely cut. It later came under the ownership under many royals.

After it was stolen in 1791, it was recut and acquired the ‘Hope’ name when it was spotted in a gem catalogue owned by banking family in London called Hope.

The Hope is one of the more admired jewels due to its rare blue colour. This is due to the trace amounts of boron atoms.

The jewel is famous for a “curse” that comes along with it. It is said that it brings misfortune to those who own or wear it.

But people are certain that the stories were made up to increase the stone’s appeal as increased publicity usually raises the gem’s value. 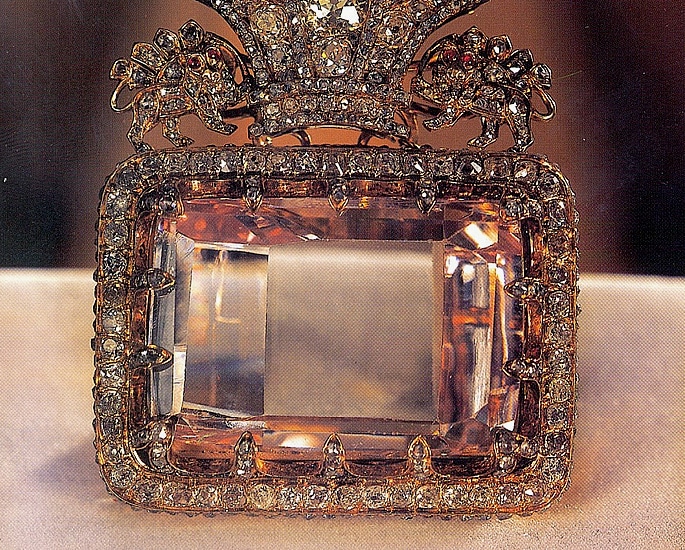 The Daria-i-Noor is one of the largest cut diamonds in the world and one of the rarest. That is down to its pale pink colour.

The exact weight is not known because the stone cannot be removed from its setting without the risk of destroying it.

This diamond was mined in Vijayanagara, India and was originally owned by the Kakatiya dynasty before it was stolen by the Khalji dynasty and to Mughal emperors.

The Daria-i-Noor may have been a part of a large pink diamond called the Great Table Diamond. Tavernier had described it as pink, very flat and over 400 carats.

It is said that the Daria-i-Noor and the Koh-i-Noor were both owned by the first Mughal emperor of India, from whom they descended to Mohammed Shah.

It then passed through other dynasty leaders and it now resides with the National Jewels of Iran where it is the most celebrated diamond. 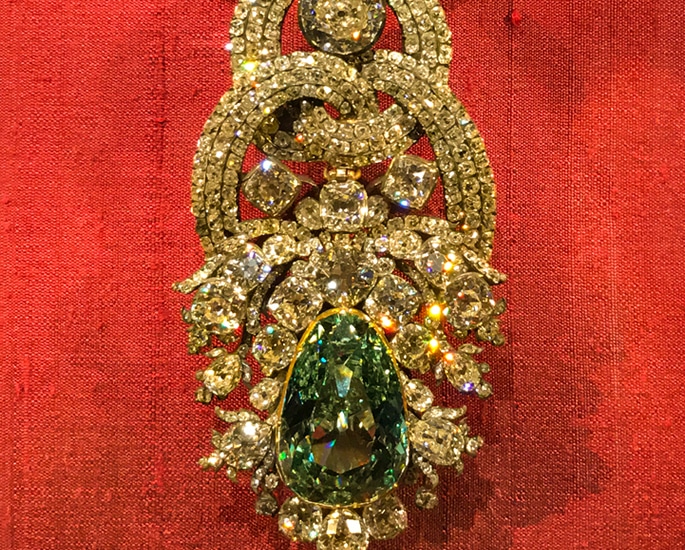 At 40.7 carats, the Dresden Green diamond is the largest natural green diamond to have ever been discovered.

Despite being cut during the 1740s, it has an impressive finish and is said to be potentially internally flawless. It may be thick, but it is fairly transparent which is a rare characteristic among diamonds.

The diamond is said to have been mined in Andhra Pradesh and has a historical record which dates back to the 1700s.

An article had covered the diamond and it was eventually bought by Augustus III of Poland in 1742.

The Dresden Green’s appearance is still the same as it was in 1768. It was integrated into a valuable hat ornament.

The diamond is the centrepiece and is surrounded by two large diamonds and 411 medium and small ones.

It is still one of the most vibrant stones and is housed at Dresden Castle, Germany. 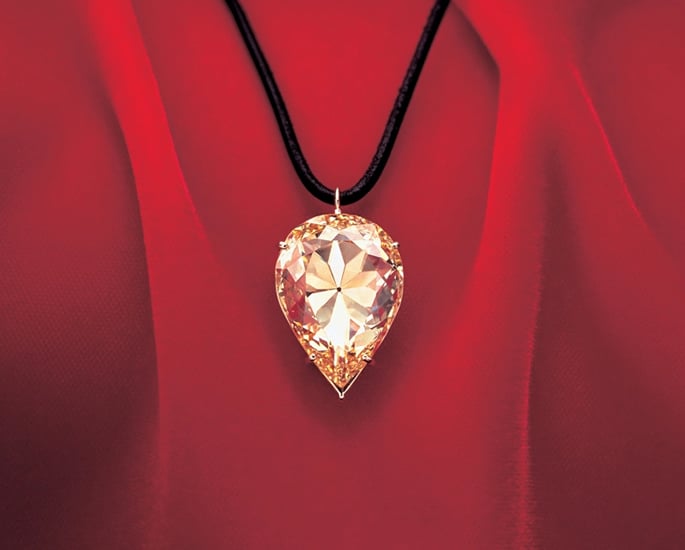 The Moon of Baroda may be one of the most recognised diamonds internationally when it made its way into America.

It is a pear-shaped jewel with a yellow colour and it was discovered in Vadodara, India.

It was originally owned by the Gaekwad family, the Maharajas of Baroda and one of India’s most powerful families.

They later sent it to Empress Maria Theresa of Austria before it was returned to the Gaekwad family. They then incorporated it into a necklace.

It was bought by an unknown buyer and the stone disappeared before re-emerging in America in 1926.

The Moon of Baroda gained a lot of publicity when it was acquired by Meyer Rosenbaum who later gave it to Marilyn Monroe. She showcased it in the iconic film Gentlemen prefer Blondes before it became part of exhibitions. 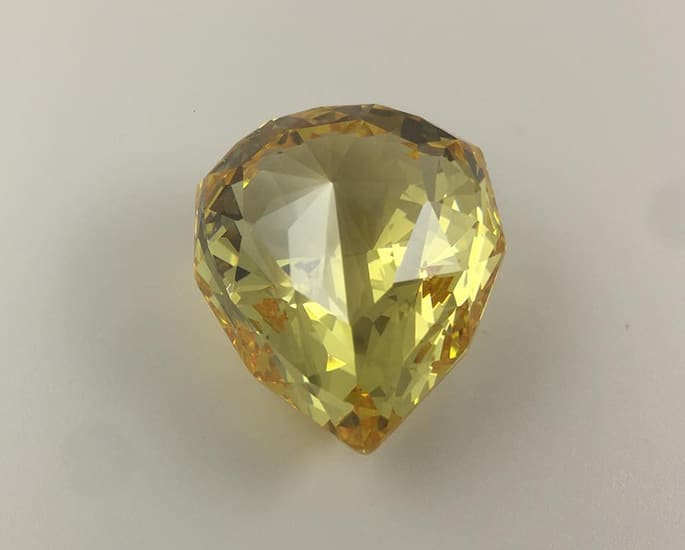 The Florentine diamond is one of the more obscure Indian-origin stones as it has been missing since the 1920s.

It is an intricately cut jewel which has a light yellow colour with slightly green overtones.

Its origins are unclear as it was reportedly owned by the Duke of Burgundy, however, it got lost during the Battle of Morat in 1476.

A soldier found it and sold it for a low price, thinking it was glass. After it passed several owners, the jewel was taken to Switzerland by Charles I of Austria.

Someone close to his family stole the diamond and went to South America.

It was then rumoured that the jewel arrived in the United States in the 1920s where it was recut and sold.

Since then, the prestigious stone has not been seen and it is likely that it will never be seen again, however, the jewel has been replicated numerous times. 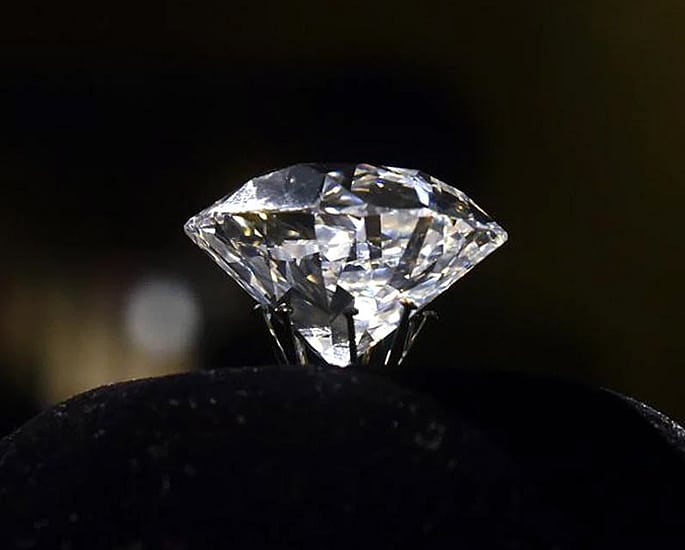 Unlike other diamonds, the Jacob has had a relatively uneventful existence as it has only changed hands twice in its history.

Alexander Malcolm Jacob sold the diamond to the Nizam of Hyderabad for a small fee in 1891.

He had paid a deposit but when Jacob lost track of the deposit, they were forced into court.

Its true was not realised and the Nizam apparently stored it in his shoe.

It was not until Osman Ali Khan found the diamond and found out how precious the stone was.

The Government of India eventually purchased the jewel and many others in 1995 for around £9.9 million.

The jewel, which is worth over £11.4 million, is held at the Reserve Bank of India in Mumbai. 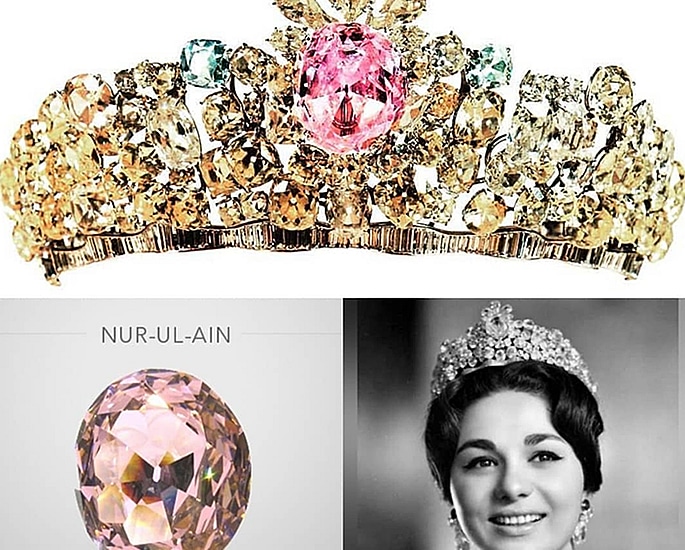 The Noor-ul-Ain is one of the largest pink diamonds in the world and has the same origin as the Daria-i-Noor. It is believed to be the second section of the Great Table Diamond.

The diamond came from the Vijayanagara mines in India but it was taken after Persian king Nader Shah and his army looted Delhi in the 18th century.

It left India with the Shah and became part of the Iranian Crown Jewels in 1739.

It came into the possession of Mohammed Reza Shah Pahlavi, the last Shah of Iran. He had Harry Winston craft the diamond into a tiara.

The Shah gifted the diamond centred tiara to Empress Farah Diba and the tiara remains recognisable to this day.

The Noor-ul-Ain tiara is still a part of the Iranian Crown Jewels. 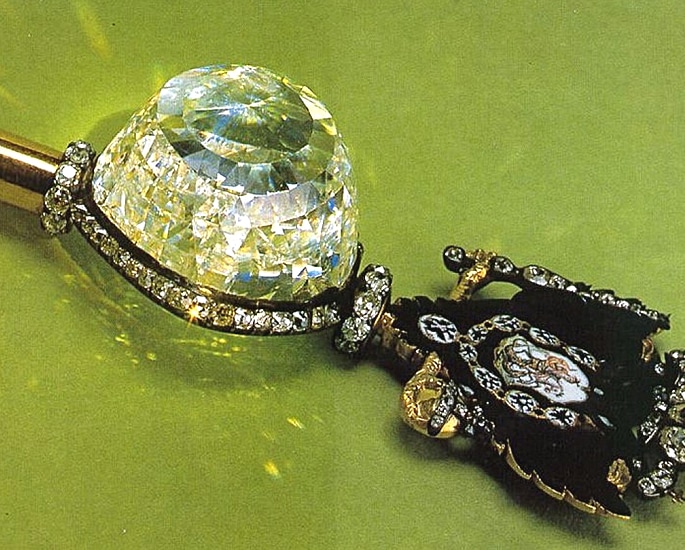 The Orlov diamond is of Indian origin but it has spent most of its time in Russia where it is displayed today.

It is one of the most stunning diamonds as it keeps its Indian rose-style cut and it has subtle green and blue tint.

The stone was allegedly stolen in 1747 by a French soldier during the Carnatic wars. It was then passed from merchant to merchant before it was bought by Count Grigory Grigorievich Orlov.

Count Orlov had a romance with Russian Empress Catherine the Great which dwindled.

He apparently gifted the diamond to her in a bid to rekindle their romance. However, the story was made up and Catherine purchased the jewel.

She created the story so she would avoid criticism for spending the state’s budget on jewellery.

The Orlov diamond is currently part of the Diamond Fund of the Moscow Kremlin. 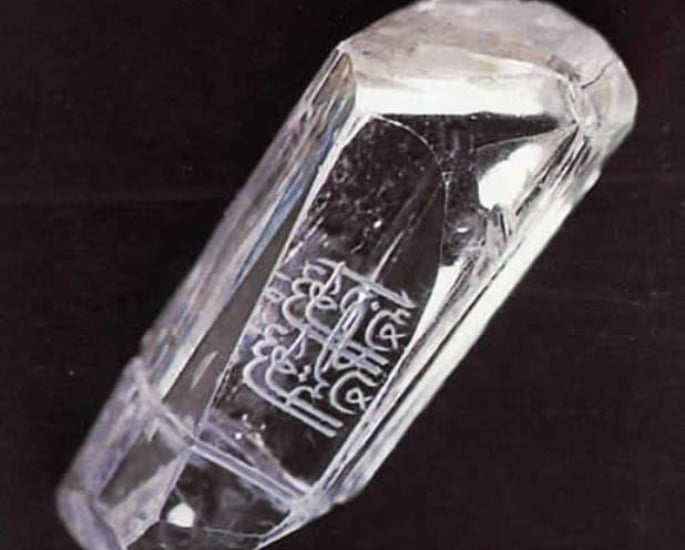 During approximately 1450, the Shah diamond was discovered in the Golconda mines, Central India.

It may not look as appealing as the other Indian diamonds, but the Shah is rich in history as it was owned by three Shahs.

The diamond is yellowish in appearance due to the iron oxide at the surface and its cut is typical of Indian diamonds, called a lasque cut.

Its shape has seen it often described as a coffin. The Shah features a groove around the stone which accommodates the thread when it was worn around the neck.

While these are some unique features, what is remarkable is that the names of the three rulers who owned it have been engraved in Persian.

These inscriptions are proof of its illustrious history.

Today, the diamond is showcased as one of seven famous stones as part of the Kremlin Diamond Fund.

These diamonds have a rich history since they were discovered centuries ago in the diamond mines of India.

Many have had a number of owners, some of whom stole the diamonds.

All of the diamonds have been intricately cut and have unique details. Many are on display around the world to highlight the rich but ancient history of India.

Dhiren is a journalism graduate with a passion for gaming, watching films and sports. He also enjoys cooking from time to time. His motto is to “Live life one day at a time.”
10 Best Sri Lankan Artists known for their Wonderful Art
Derby Book Festival 2019: British Asian Writing