All over the world, there are renowned artists known for their wonderful pieces of work. Here are 10 famous Sri Lankan artists.

"In all his works, there is the moderation of maturity."

Sri Lankan artists are responsible for some of the most creative and unique pieces of art in the world.

Many came from humble beginnings but after training, their passion for art became a career. They have travelled all over the world, picking up new influences along the way.

They later incorporate a range of styles into their work. While some choose to paint, others create sculptures or use digital media.

Their work showcases a number of messages relating to wider society and that has attracted attention as many pieces have been exhibited.

Some artists are considered to be pioneers in their style and have passed it on to modern artists.

As a result, all of them have become recognised and respected in their own right.

We explore 10 best Sri Lankan artists who are known for their creative works of art. 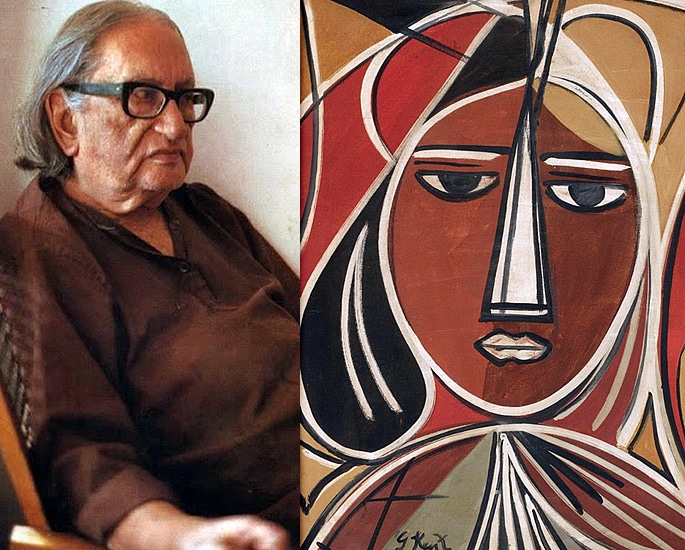 George Keyt was born in Ceylon and is often considered to be one of the country’s most distinguished modern painters.

He was best known for his richly coloured paintings that were inspired by cubism. Keyt’s art was also influenced by French contemporary artist Henri Matisse.

Keyt moved to India following his studies but returned to Sri Lanka and helped form the Colombo ’43 Group alongside other famous Sri Lankan painters.

The group focused on merging the trends within European Modern movements into their own cultural sphere.

Poet Pablo Neruda spoke of his work: “Keyt I think is the living nucleus of a great painter. In all his works, there is the moderation of maturity.”

After passing away in 1993, his legacy still lives on as his art is present in the Victoria and Albert Museum in London as well as the National Gallery of Modern Art in New Delhi. 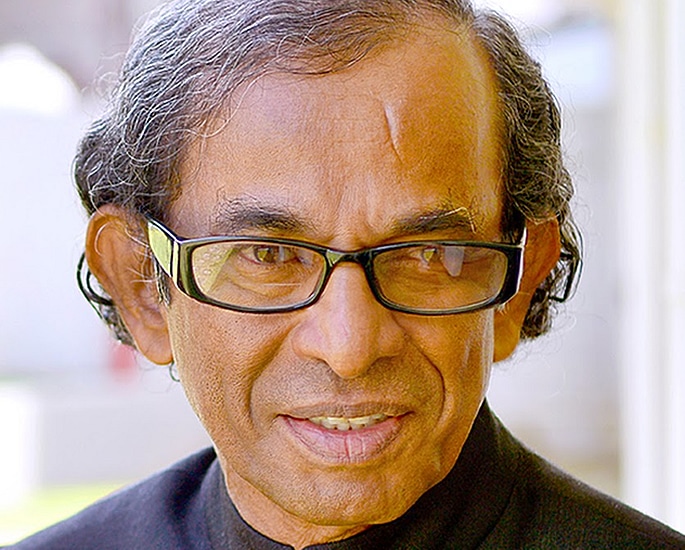 Born in Matara, Nawi Samaraweera is an accomplished sculptor and painter. He is one of Sri Lanka’s most successful artists.

He is the recipient of many prestigious awards and has been commended by renowned personalities for his contribution to fine arts.

Samaraweera was influenced by his father who was known for his intricate wood carvings. He was also inspired by his surroundings.

His success began in 1967 when he was awarded a Scholarship for the “Best Student” at the Government College of Fine Arts in Colombo.

Samaraweera’s work continues to evolve even after 45 years. He adapts to presenting art using modern mediums such as Digital Paintings on iPad.

By adapting to advancements, Samaraweera is one of the most recognised Sri Lankan artists. 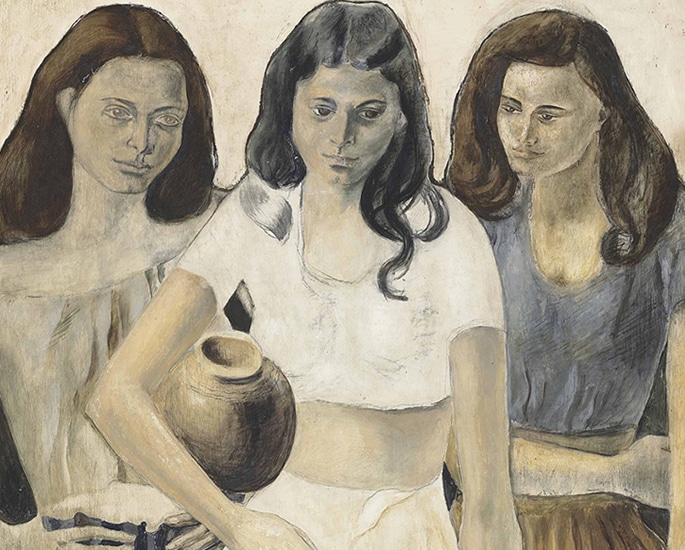 Ivan Peries was born near Colombo and was a founding member of the Colombo ’43 Group along with George Keyt, Justin Daraniyagala and Harold Peiris.

Peries lived more than half his life in London and Southend-On-Sea but his art was influenced by Sri Lanka.

His subjects were usually of rural life and the ocean shoreline. They depicted a world which was not modern or ancients but were clearly recognisable.

This is showcased in Monk on the Seashore at Dehiwala. It depicts a black sky, two white abstract trees and a red-robed monk sitting in the foreground looking towards the seashore.

When also considering his cultural dislocation, Peries’ art subjects made him an important post-colonial artist. He is also a key person in the origins of contemporary Sri-Lankan art.

His work is internationally recognised and is located in various cities across the world including London and Paris. 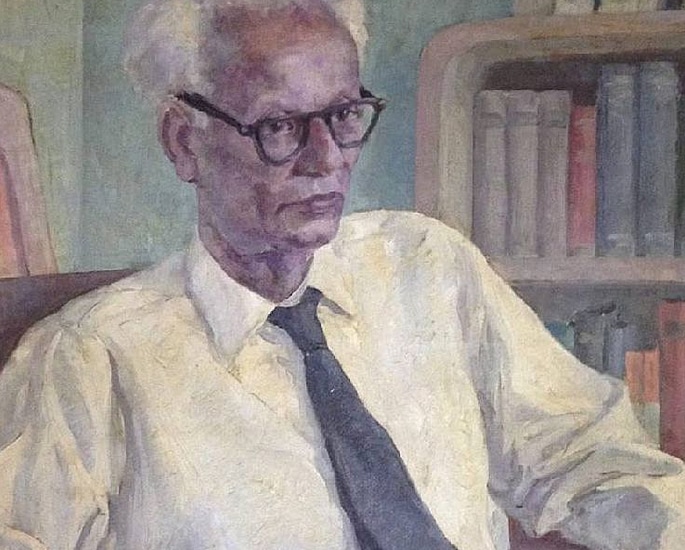 David Paynter was one of the first Sri Lankan artists to be internationally recognised, despite having no formal art lessons when he first started.

He travelled to various European countries before returning to Sri Lanka to introduce a Western style of painting.

He later turned his attention to portraits where he achieved a lot of success. It was a big deal to be painted by Paynter.

His clients ranged from Sri Lankan elites to British Governors. While he proved to be a popular portrait artist for the rich and influential, that did not show his true prowess.

He was made an OBE in recognition of his services to art and his work continues to be praised. 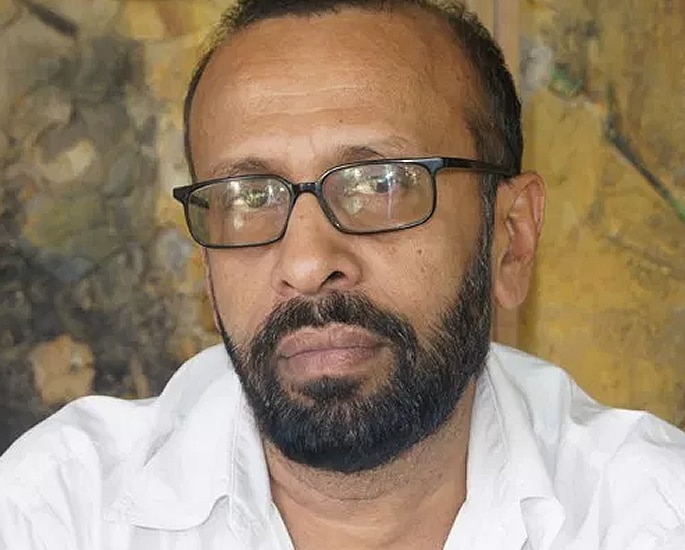 Jagath Weerasinghe is a Sri Lankan contemporary artist and archaeologist whose art has political themes.

They feature the context of the civil war between the Tamils and Singhalese in Sri Lanka. Weerasinghe uses watercolours and installations to highlight the barbarity that regimes are capable of on their own citizens.

He depicts this within his art despite belonging to the majority Singhalese community.

Weerasinghe has been a key figure in developing Sri Lankan art since the early 1990s.

He came up with the phrase ’90s Art Trend’ as he recognised the need for a cohesive framework to describe the activity of his peers.

This ended up being important for the practice of politically-minded contemporary art during the 1990s.

As a pioneer of politically-themed art, Weerasinghe is displayed in galleries all over the world. Countries like the United States, Australia and Japan are just a few when it comes to exhibiting Weerasinghe’s work. 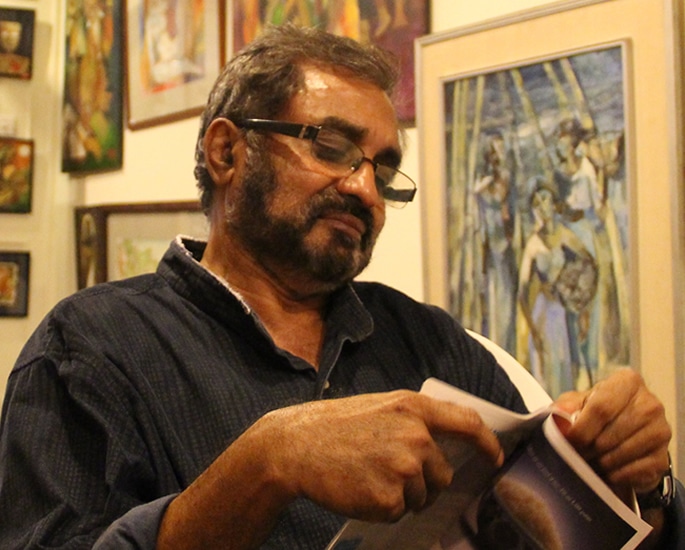 D. Raja Segar is commonly known as Segar and is a sculptor as well as a painter.

Born to poor parents in Colombo, Segar had an unorthodox route into art as he was self-tutored. Even though he was an accounting student, his passion was art.

Segar became bored with his tedious role in the accountancy department of drinks manufacturing company. He then started creating greeting cards based on the lifestyle of Sri Lankans.

They quickly became popular as the design was completely unique. Many other designs had been copied. Segar officially became a painter when art enthusiasts wanted him to create large paintings.

He wanted to make an impact so he began experimenting with refractive light effects and used figurative cubism.

As a painter, he uses watercolours, oil and mixed media. When sculpting, he uses steel.

Even though he had no real route into art, Segar has become one of Sri Lanka’s most famous artists. 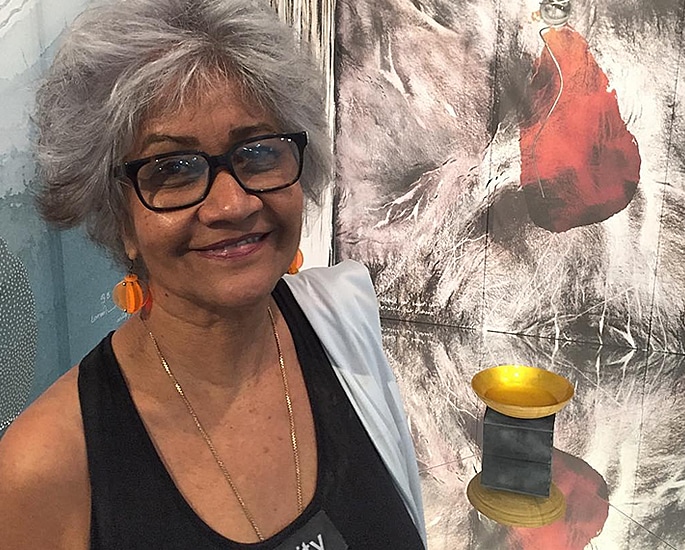 Anoma Wijewardene is a contemporary artist who divides her time between London and Sri Lanka where her studio is.

Since studying in England, Anoma has gone on to become one of the most accomplished artists.

She creates work using a number of mediums. Canvas, digital art, video and sculptures are used to highlight multiple interpretations.

Wijewardene explores isolation, healing and the freedom of the human spirit.

Her art uses a layered technique to explore these themes and many more. They also mirror her interplay between time and nature.

Wijewardene currently works on her paintings and installations but has painted iconic fashion designers.

Calvin Klein and Ralph Lauren are just some of the names who have been painted by the Sri Lankan artist.

Her association with such famous names make her a respected name in the art industry. 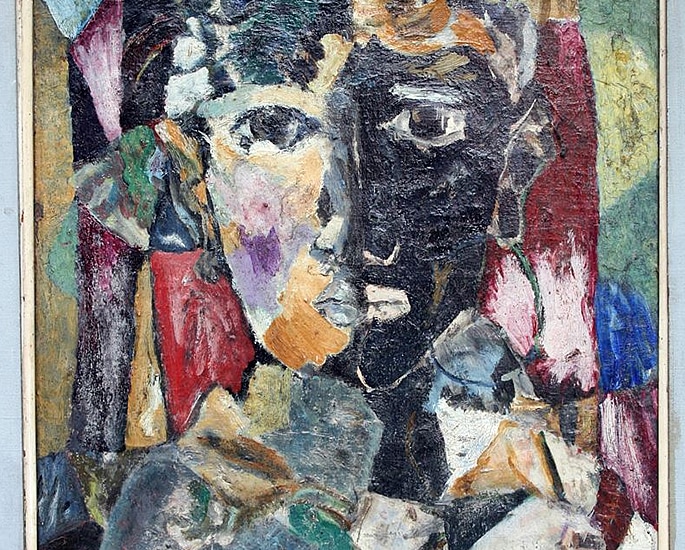 Justin Daraniyagala was an important artist in developing art within Sri Lanka yet his work seems to fall under the radar.

He was one of the four artists who founded the Colombo ’43 Group which was an association of painters who had broken away from the Ceylon Society of Arts.

Daraniyagala’s used oil to create his paintings which usually were of a human figure. His paintings showcased an unusual authority and power.

The combination of boldness and daring themes are what made Daraniyagala’s work unique.

It highlighted his vivid imagination and the innovation he brought to awaken modern painting.

He was an artist who prioritised his creations over anything else. His paintings showed that as each one showed a wide spectrum of his imagination. 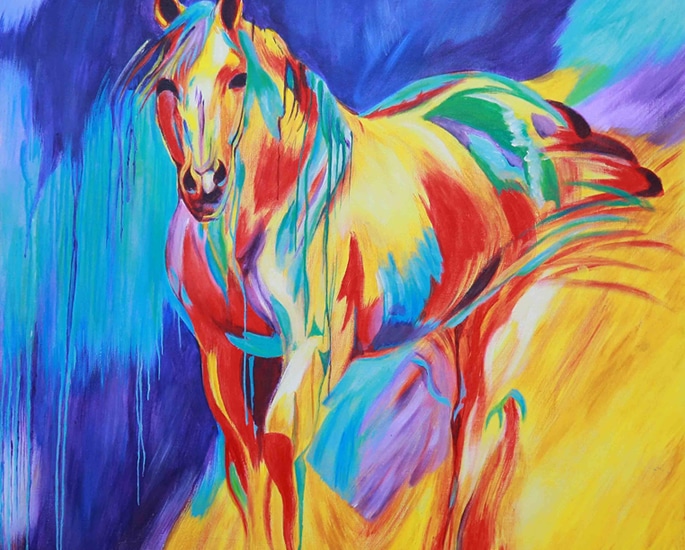 Walter Kulasooriya was born in the fishing village of Demataluwa and specialises in paintings. He was also the former curator of the Visiki Art Gallery before becoming a freelance artist.

Kulasooriya learnt about art at the College of Fine Arts in Colombo under the tutelage of David Paynter, Stanley Abeysinghe and Henry Dharmasena among others.

He does not identify himself with a particular style but Kulasooriya incorporates classical, native and modern styles.

His Earth Colour paintings showcase Kulasooriya’s most significant stylistic innovations as he uses colours which are hand-mixed.

Kulasooriya uses the same methods that were used in the past to create work which is a modern take to integrate with nature.

Kulasooriya was recognised in Sri Lanka but he attracted international attention when he achieved a Guinness World Record in 1996. He created a 100-metre long painting of the Sinharaja Forest Reserve which was the longest painting in the world at the time.

As time went on, Kulasooriya only became more popular as an artist. 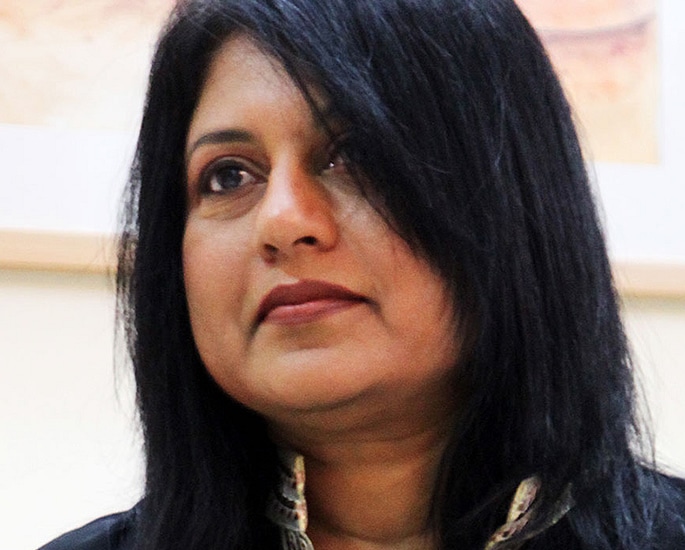 Anoli Perera is a contemporary artist who was mostly self-taught when she trained in stone carving at the Artworks: The Visual Art School of Princeton for Continuing Education in America.

Since then, she has been a visual artist for more than 25 years and has showcased her art extensively at exhibitions.

Perera uses the concept of ‘bricolage’ in her work. Fragments from raw materials, objects and painted surfaces come together to create a textured surface.

Much of her work explores feminist expression and craftsmanship as well as history and myths.

Perera bases her materials on the type of social context she wants to explore in her work.

Apart from being one of the directors of the Theertha International Artists Collective, Perera was part of a generation of artists who created contemporary art which highlighted social aspects in Sri Lanka.

These artists may have risen to prominence during different eras of art, but all of them incorporate unique styles into their work.

Their uniquely designed pieces have a number of influences and are used to convey different messages.

While some of them employed traditional artistic methods, others took a more modern approach.

It is what made them some of Sri Lanka’s most famous artists, and they will be vital in inspiring the next generation of artists.

Dhiren is a journalism graduate with a passion for gaming, watching films and sports. He also enjoys cooking from time to time. His motto is to “Live life one day at a time.”
15 Best Romantic Urdu Novels You Must Read
10 Diamonds Originating from India