Dil was disowned by her parents and left homeless in Sri Lanka for three years.

A Sri Lankan radio presenter proposed to her girlfriend on the radio, after the Ireland legalised same-sex marriage in a landslide vote on May 23, 2015.

Dil Wickremasinghe asked her girlfriend, Anne Marie O’Toole, to marry her live on national radio in a simple but touching speech.

The Newstalk presenter said: “Now that we can and there’s nothing and no one that is standing in the way, will you marry me?”

And the answer was, of course, a firm ‘Yes’ laden with uncontainable joy and love.

It has been a great week for Dil and Anne Marie. Not only are they engaged after a historic vote in favour of same-sex marriage, they also welcomed their first child on May 17, 2015.

Baby boy Phoenix was born at 2.05am. Our wish for a child & a home birth came true -looking for a hat trick #VoteYes pic.twitter.com/vi2VM1mAQf

Now that they can become a true family in Ireland, congratulatory messages have been flooding in for the couple.

Rosemary Mac Cabe wrote: “Mega congratulations to the 3 of you Dil! Such massive love going around right now xx”

Meadhbh Higgins tweeted: “Congratulations to you and your family! Phoenix is one lucky little boy 🙂 All the best to the three of you.”

Dil herself summed up her overwhelming excitement in a Pharrell Williams’ song, ‘Happy’:

I had a dream – I had a baby at home, Ireland voted YES to #MarRef & I proposed to Anne Marie & she said YES! ? http://t.co/P2orUFdoPu

Like the battle to legalise gay rights around the world, Dil also went through a rocky ride to being accepted for her sexual identity.

She recalled being disowned by her parents: “I was homeless actually in Sri Lanka for about three years.”

Her workplace also abandoned her, as she described: “I got my first job in radio in Sri Lanka which is my dream job, but sadly I was fired after six months when they found out I was a lesbian.”

Feeling like she had nowhere and no one to turn, Dil moved to Ireland in the hopes of living a better life.

She said: “I came to Ireland 15 years ago. I just knew this was a country that would give LGBT people the equality right they well and fully deserved.” 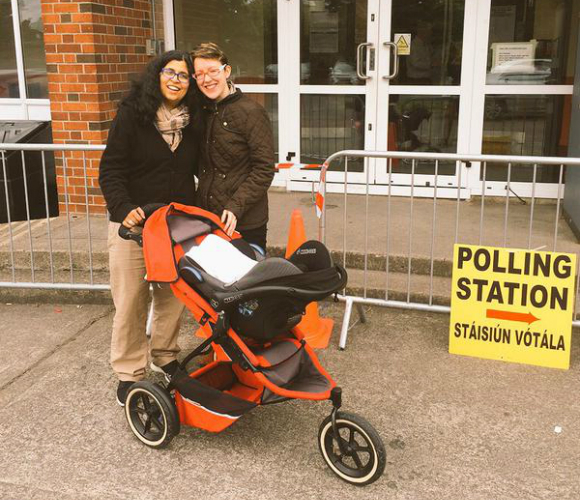 The couple met at a mental health conference in Wicklow in April 2010. There truly is no better way to celebrate five years of bliss than welcoming a newborn and being seen as equal to heterosexual couples in the eyes of the law.

Same-sex marriage triumphed in Ireland, after 62 per cent of the Irish Republic electorate, or 1,201,607 people, gave the nod.

A huge crowd gathered in central Dublin to celebrate the milestone achieved in the predominantly Catholic country. There are already calls for the Church to reconnect with its younger generation.

Diarmuid Martin, the Archbishop of Dublin, said: “I ask myself, most of these young people who voted yes are products of our Catholic school system for 12 years.

“I’m saying there’s a big challenge there to see how we get across the message of the Church.”

He continued: “We [the Church] have to stop and have a reality check, not move into denial of the realities.”

Images courtesy of Newstalk and http://www.dilw.ie/