Fans worldwide look forward to serials that are made in Pakistan. DESIblitz presents 10 top upcoming Pakistani Dramas for 2021.

"My body language, my gestures and everything is very unique."

Upcoming Pakistani dramas of 2021 will win the hearts of desi communities across the world.

Similar to 2019 and 2020, these upcoming Pakistani dramas will continue to provide compelling and entertaining content for viewers.

The best thing about serials from Pakistan is that they do not continue endlessly.

Most of the upcoming Pakistani dramas in 2021 will have a realistic feel to them, including the serial Faryad.

The forthcoming serials, featuring big names will see many stars pairing with each other for the first time.

Romance will dominate these upcoming Pakistani dramas for 2021. However, other genres such as mystery, thriller and spirituality are also in the mix.

Here is a list of 10 best upcoming Pakistani dramas of 2021 that everyone should watch. 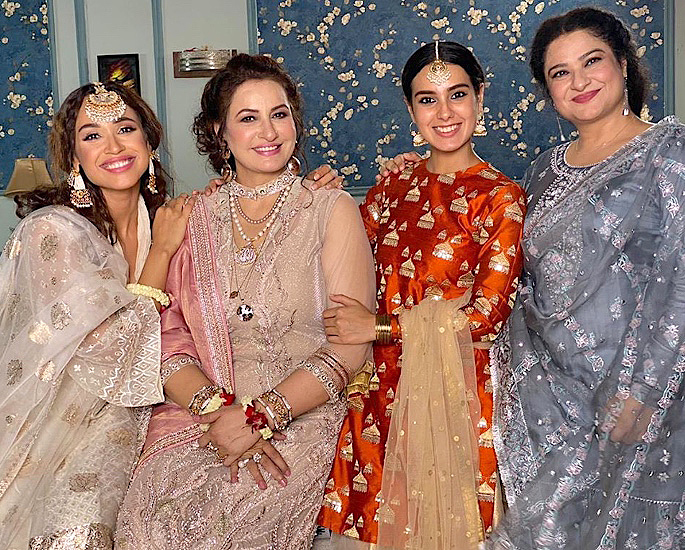 Raqeeb Se is one of the most romantic upcoming Pakistani dramas of 2021. It features Iqra Aziz Hussain of Ranjha Ranjha Kardi (2018) fame.

Iqra reportedly will be seen in a very unique and powerful role for this drama series. Her fans will be highly anticipating this drama, especially with Iqra always taking on fresh and challenging roles.

On September 2, 2020, Iqra went on Twitter to confirm this drama, sharing a photo of the script.

The script also confirms that Kashif Nisar is the director, with award-winning playwright Bee Gul being the writer.

According to the writer, this drama has a nice story, which is very much reality-based. Similar to DSJHS, this drama will also run on HUM TV in 2021. 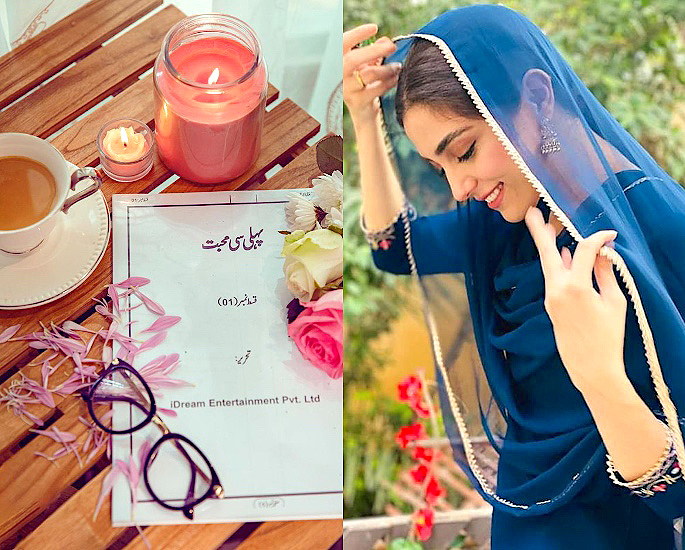 Superstars Maya Ali and Sheheryar Munawar are featuring in Pehli Si Mohabbat. Maya will be playing the character of Rakshi in the drama.

Maya who was busy in her film career makes a TV comeback after three years. Sheheryar returns to the small screen after a six-year hiatus. He too was concentrating on Pakistani films.

Having a strange look, Hassan will be portraying a role, which has an orthodox outlook. Hassan exclusively told Images that his decision to act in dramas was influenced by the involvement of certain people:

Faiza Akhtar is the writer of the serial, with Anjum Shahzad helming the direction. Under the banner of IDream Productions, Abdullah Seja is the producer of the drama.

Viewers can expect many emotional and sentimental moments in this drama. ARY Digital will transmit this series in 2021. 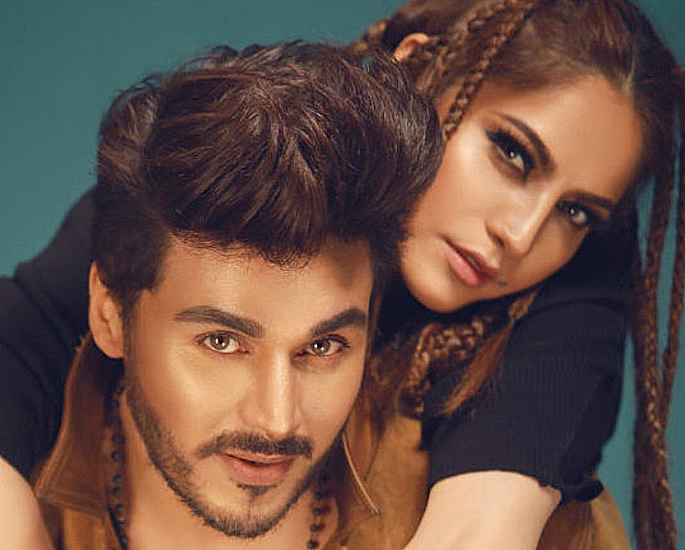 The two have previously worked together in the Pakistani film Chupan Chupai (2017). The duo once again pairs up as a couple for this drama.

The audience will be looking forward to the onscreen chemistry of Ahsan and Neelam. Actor and composer Haroon Rashid, as well as Shabbir Jaan, Saba Faisal and Nousheen Ahmed feature in this drama.

An Instagram post from Pakistani actress Amar Khan suggests that she is also starring in this drama. Alongside an image with a rose, a caption reads:

The serial does not have a run of the mill story. In fact, it will be very different from the norm.

Qayamat is a romantic drama, which Sarwat Nazir has written. Ali Faizan takes the director’s chair for the serial.

The drama is a presentation of Abdullah Kadwani and Asad Qureshi. The serial will air on Pakistani channel GEO Entertainment. 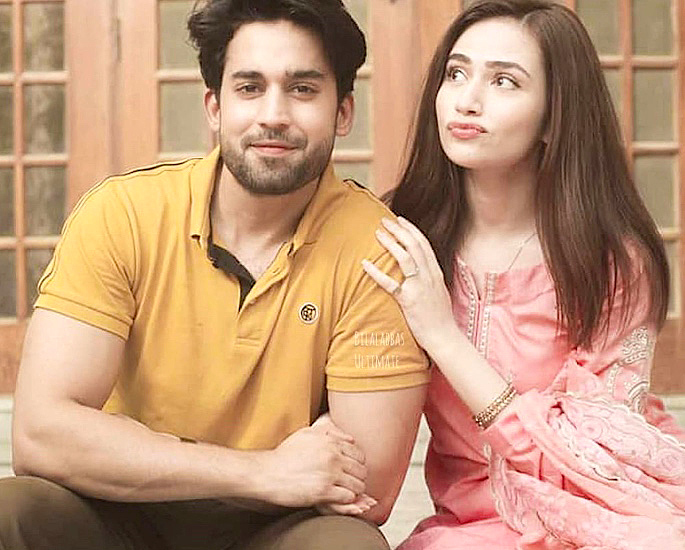 Dunk is one of the most awaited upcoming Pakistani dramas of 2021. The mystery-thriller serial has all the ingredients to become very successful.

Bilal and Sana will pair up for the first time on screen. It is being said that the serial will have some similarities to crime drama Cheekh (2019).

Similar to Cheekh, Bilal is also the main lead in this drama. He takes on the role of Haider, with Sana playing Amal on screen.

“I can’t talk much about it, but its a very controversial topic and I know it will be discussed a lot.”

“Although my character isn’t very challenging or out of my comfort zone its a very normal character.

“Story is very good, team is same as that of Cheekh, Balla, Ishqiya. But I am pretty much hopeful and excited that its gonna be a good project.”

The narrative revolves around a murder, especially two couples consisting of four people.

The drama is a Big Bang Entertainment presentation with Fahad Mustafa and Dr Ali Kazmi looking after the production.

Badar Mehmood famous for the TV series Ishqiya (2020) is the director of this dramas. Mohsin Ali is the writer of the series.

The shooting of Dunk has apparently taken place in a lavish farmhouse. This potential award-winning drama will transmit via ARY Digital. 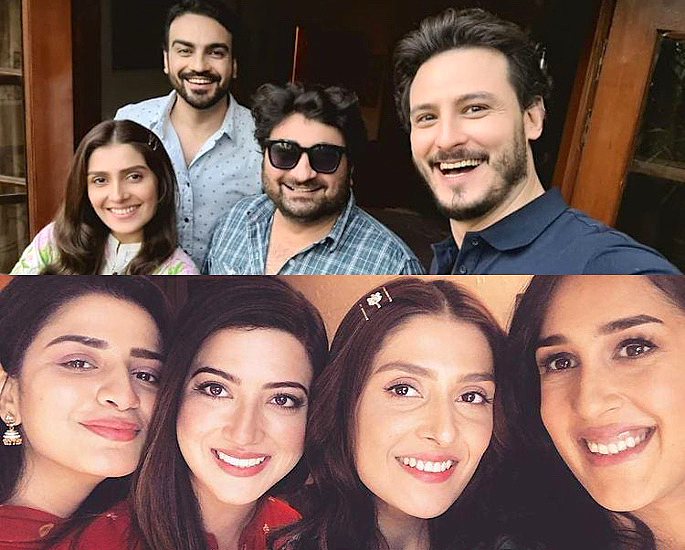 Arsalan Naseer who became popular for Comics By Arsalan (CBA) makes his TV debut with this drama.

Arsalan divulged some interesting aspects about the drama, describing it is as “a tale of two families who are not only neighbours but are also related.”

“The grandmothers of the two families have a never-ending beef but their grandchildren think otherwise.

“It is a love-hate relationship of one big family that is filled with occasional jealousy, friendship, romance, and lots of laughter.”

Saima Akram Chaudhry who gained popularity for the comedy series Suno Chanda (2018) is the writer. Pakistan actor and comedian Danish Nawaz is the director of this light-hearted drama.

Chupke Chupke will broadcast to a worldwide audience on HUM TV in 2021. 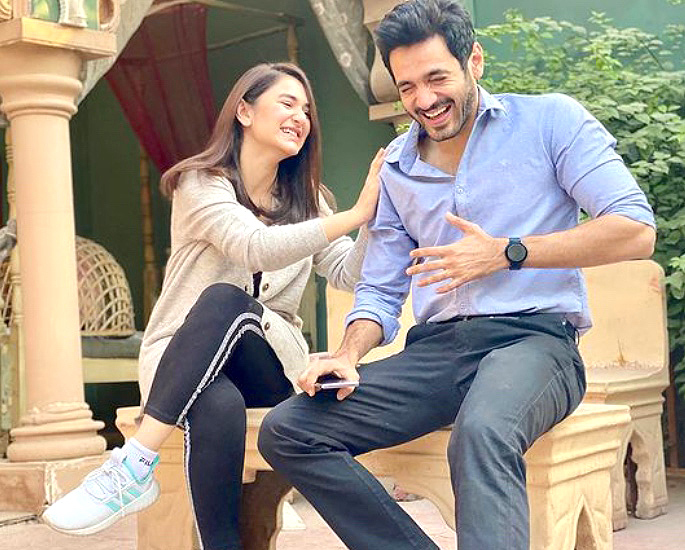 Dil Na Umeed To Nahin (DNUTN) is a drama that tackles the issue of human trafficking. For the first time actor, Wahaj Ali and actress Yumna Zaidi will pair up in a drama.

Yumna went on Instagram to post a picture of her and Wahaj, announcing the drama with a caption reading:

“Posing is a performing Art ? And we were not really good in it ,swipe to left for the proof ? @wahaj.official?#DNUTN #comingsoon??”

Yumna also exclusively tells Cutacut that this drama has more than one theme:

“The story is based on multiple causes. It has three major tracks: Human trafficking, child abuse and a young girl who wants to become a cricketer.

“As far as my track is concerned, it is about women trafficking. Parents from slums sell their young daughters.

“The drama explores where these girls end up and what kind of a life they spend. And, if any of them dreams big, how does she manage to pursue that.”

Speaking about her character, Yumna adds:

“Viewers will see me in a completely different avatar. My body language, my gestures and everything is very unique.”

Wahaj feels very privileged to work in this drama as it addresses a very crucial topic:

“I feel extremely honored and lucky to be a part of this project that has tackled a very important social problem….

“It has been a wonderful experience working with Yumna and Kashif (sir).

“We are all working hard on it…I hope we get to bring across the message that we want to.”

A collaboration with Kashf Foundation, the drama is penned by Amna Mufti. Kashif Nasir is the director of the serial.

Noman Ijaz, Samiya Mumtaz, Yasra Rizvi, Navid Shehzad and Omair Rana are the other prominent names in the drama. DNUTN will air on TV One Pakistan. 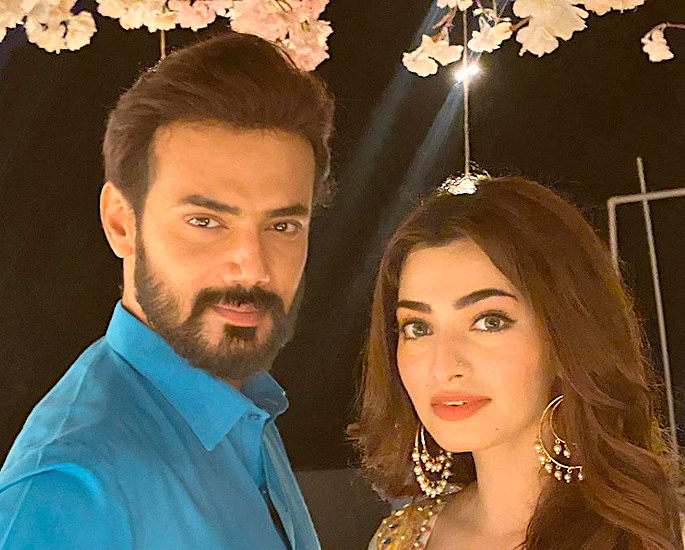 Faryad is a drama serial of a different kind. This is a production of Next Level Entertainment. Canadian singer-songwriter and Pakistani national Adeel Chaudhry is playing the role of Haroon in this drama.

The two leading ladies are newcomers in the TV industry. It will be interesting to see how viewers perceive Zahid’s character, which is not the usual chocolate boy hero.

It seems that Zahid prefers to perform bold characters, especially with a strong role in Faryad.

Working closely with the director on the script, Zahid admits amendments were made to depict realism as much as possible.

Many other familiar faces from the television fraternity will also appear in this Pakistani drama.

Samina Humayun Saeed and Sana Shahnawaz are the producers of this serial. Viewers will be able to watch Faryad on ARY Digital. 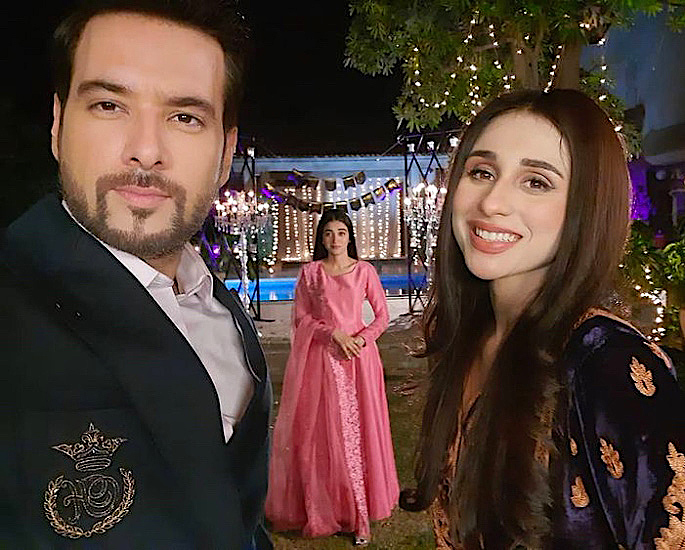 Khwab Nagar Ki Shehzadi is to quite an extent a romantic and family drama serial. For this serial, actor Mikaal Zulfiqar and actress Mashal Khan will play the lead roles.

As per reports, this drama is very excitingly fantasy orientated. Prominent TV host Shaista Lodhi also has a part in the serial.

Shaista speaks about the numerous thoughts she had before agreeing to do this drama:

“I was not nervous, but yes, a little confused, because of the questions crossing my mind and the success I achieved in the hosting field and whether it’ll be the same or not.

“Will people judge me and compare whether I’m a better host or actor.

“But I’ve done it and let’s see how people will react.”

Anmol Baloch and Ahmed Usman will also be starring in this drama. Fahad Mustafa and Dr Ali Kazmi are the producers of this serial with Syed Atif Hussain directing it.

ARY Digital will be broadcasting this drama across the globe in 2021. 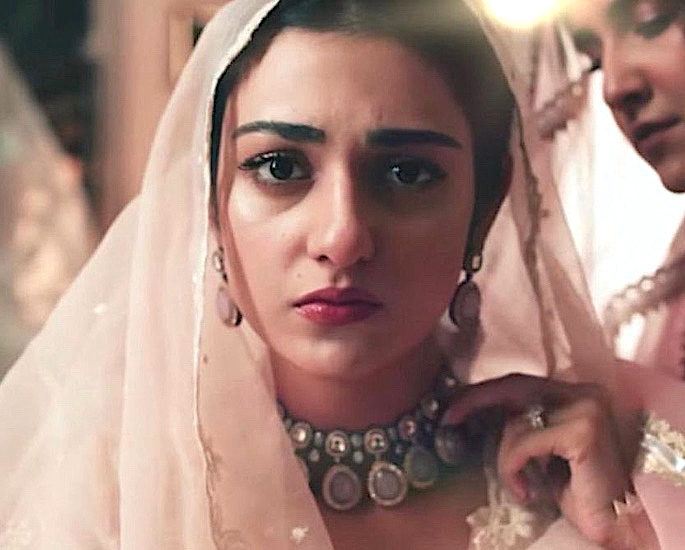 Raqs-e-Bismil has all the hallmarks of a top drama, particularly with a romantic story that will touch the heart and soul.

The serial will be along the lines of spiritual dramas Shehr-E-Zaat (2012) and Alif (2019). The drama has an impressive star cast, with Imran Ashraf and Sara Khan playing the lead roles.

Imran has a completely different avatar within this serial in comparison to other works.

HUM TV Pakistan posted a gripping teaser of the drama, with a caption stating:

“A soulful story is all set to hit your tv screen very soon.”

Analysing the trailer, this drama may very well get viewers emotional. Earlier on November 23, 2020, HUM TV Pakistan shared the first look of Sarah Khan in this drama.

Shazia Wajahat and MD Productions are the producers of Raqs-e-Bismil. The drama has been written by Hashim Nadeem, as well as directed by Wajahat Rauf. 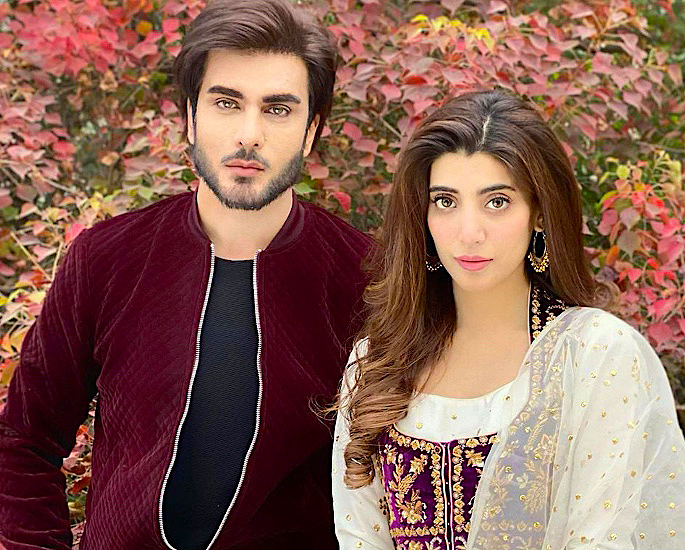 Amanat is a Next Level production, courtesy of the dynamic duo, Samina Humayun Saeed and Sana Shahnawaz.

In an exclusive conversation with Something Haute, Imran went on to disclose more about this drama:

“I have signed this serial after almost one and a half year.

“The last project I shot for was Thora Sa Haq which wrapped up in December, so after almost a year I will go on any shoot.

“The director of our drama Amanat is Shahid Shafaat, who has a lot of great dramas to his credit.”

“Cast includes Urwa Hocane who has been paired opposite my character. Then there is Saboor Aly, Haroon Shahid, Saba Hamid, Sheheryar Zaidi, Babar Ali.

“Gohar Rasheed will also be making a guest appearance.”

Urwa Hocane is the leading actress opposite Imran for this drama.

Sana also shared her thoughts with Something Haute about the genre, script and the big names fitting into their respective characters:

“It is a family drama with love, romance and all other elements that audience wish to see in our dramas.”

“This script has this unique quality that you get hooked on to it.”

“I gave Urwa four episodes to read and she asked me  to send her more, and then she ended up reading nine episodes in one night. So, we hope that this magic also translates on screen.”

Shooting for this drama has taken place in Islamabad and Karachi. Rukhsana Nigar is the writer of Amanat, with Shahid Shafaat being the director.

Amanat is an ARY Digital project, which will be available to watch around the world.

The third season of Khuda Aur Mohabbat is also a must-watch for 2021. All these upcoming Pakistani dramas will enthrall audiences, with their storylines and issues that they highlight.

Faisal has creative experience in the fusion of media and communication and research which increase awareness of global issues in post-conflict, emerging and democratic societies. His life motto is: "persevere, for success is near..."
Kriti Sanon opens up on Pay Disparity & Power Imbalance
Diljit Dosanjh slams Kangana over Farmers’ Protest Tweet