Pakistan continues to churn out quality serials, with star pairings. DESIblitz compiles a list of 11 top upcoming Pakistani dramas for 2022.

There are many upcoming Pakistani dramas that fans can look forward to in 2022.

Many of these upcoming Pakistani dramas, present fresh and attractive concepts, with some being adaptations from reputable books.

More importantly, 2022 will see big stars teaming up together in lead roles within these dramas.

Fans worldwide will also get to see the best works of directors, producers, and writers.

The likes of Fawad Khan, Farhan Saeed, Urwa Hocane, and others will be starring in these serials.

We provide a list of 11 exceptional upcoming Pakistani dramas that are a must-watch in 2022. 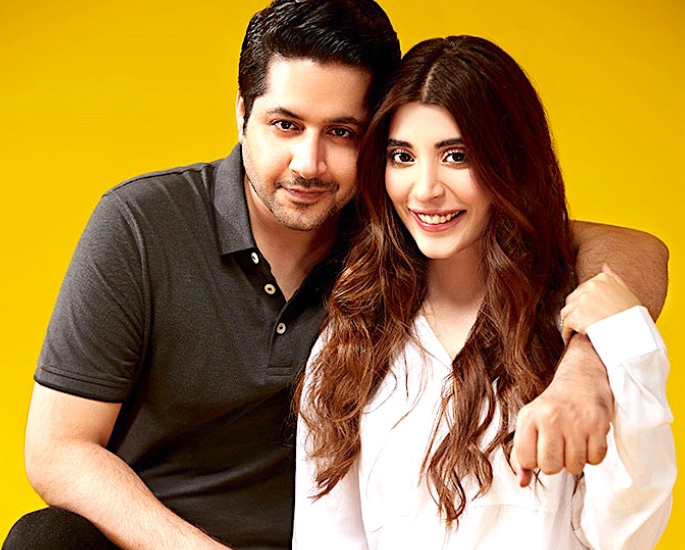 Badzaat is one of the most exciting upcoming Pakistani dramas that GEO TV will showcase to fans.

The drama is a direction of Siraj-Ul-Haq and written by Misbah Nosheen. It is a 7th Sky Entertainment production for GEO’s entertainment channel.

The dashing Imran Ashraf plays the lead role, pairing up with the gorgeous Urwa Hocane.

The two are familiar with each other, especially with their fantastic on-screen chemistry in the drama, Mushk (2020).

Many behind-the-scenes images have also gone on to circulate on social media sites. 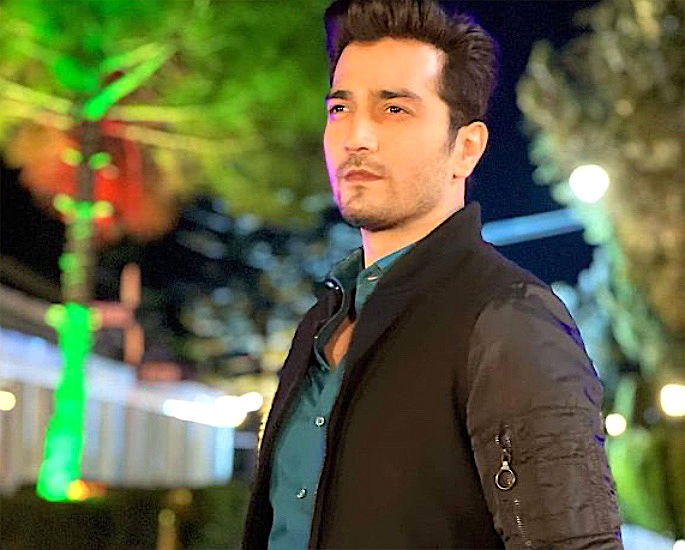 Dekh Tamasha-e-Roshni is amongst the upcoming Pakistani dramas, featuring many stars. The drama will air on the entertainment channel of GEO TV.

Hiba Khan will be playing a key role in this TV project, alongside adaptable actors Ahsan Khan and Shahzad Sheikh. All three will play roles not seen before.

Ali Faizan Anchan is the director of the series, with Misbah Ali Syed being the writer of it. There are several compilations of behind-the-scenes footage of this drama.

This includes the cast sitting on some type of bus singing, along with some picturesque locations. 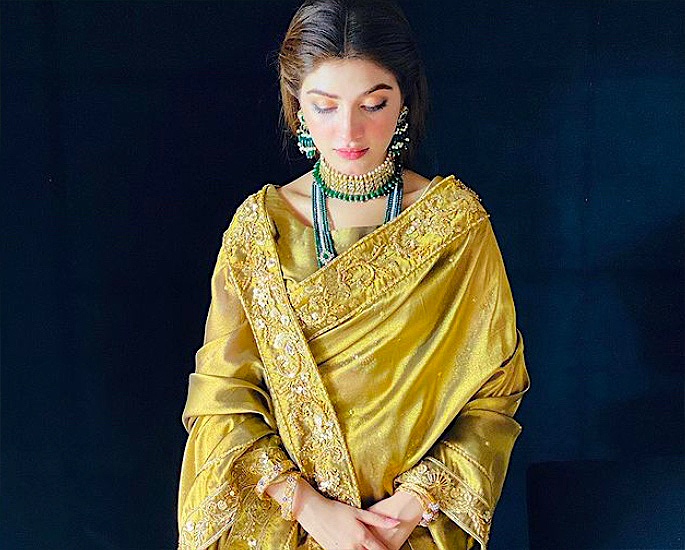 Dil Awaiz is a romantic drama, with plenty more on offer. It will be on our TV screens, courtesy of GEO Television.

Hit trio Affan Waheed, Kinza Hashmi, and Azfar Rahman are the lead stars in this drama.

On October 29, 2021, Kinza Hashmi went on Instagram, sharing a few pictures of her in a stunning golden saree with emerald jewellery.

Besides, the images, she wrote, “Dilawaiz” coming soon.” Behind-the-scenes, pictures reveal that the shooting of the drama has also taken place in a rural setting.

Viewers should not mistake this drama for the namesake, Dil Awaiz, which came out in 2013.

Whilst Mazhar Moin is the director of the series, Abdullah Kadwani and Asad Qureshi are the producers. 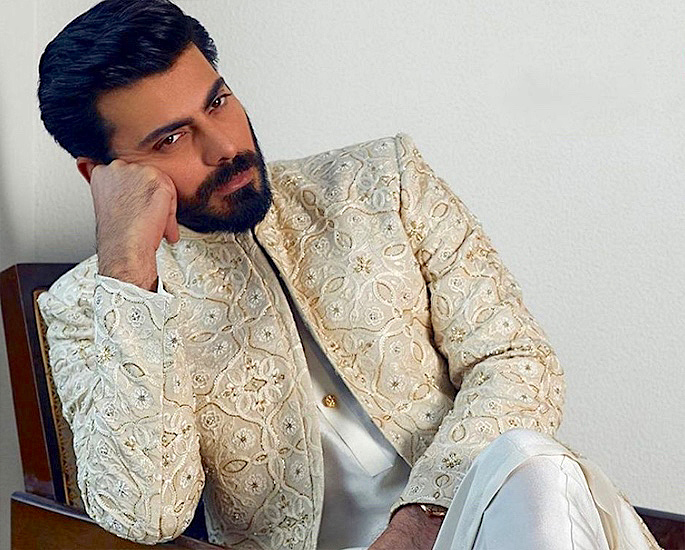 Reports suggest that Fawad is going to play the lead character of Safdar in the TV adaptation of the namesake novel by Farhat Ishtiaq.

The playwright is behind other successful dramas, including Humsafar (2011) and Udaari (2016),

Ayesha Omar apparently will portray the role of Liza opposite Fawad.

Fans of Pakistani dramas will eagerly await other cast members of this drama. An audio series of the book is available on YouTube. 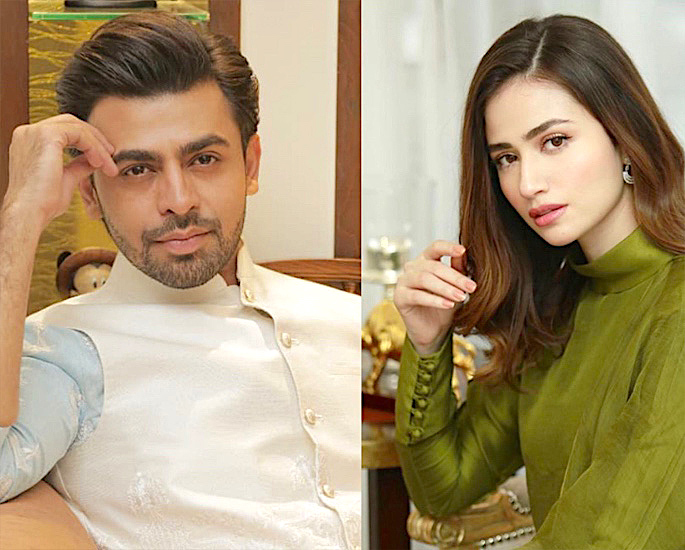 Kaala Doriya is one of the most awaited upcoming Pakistan dramas, that will be broadcast on HUM TV. Celebrities Farhan Saeed and Sana Javed will pair together for the first time.

Saima Akram Chaudhry of Suno Chanda (2018) and Chupke Chupke (2021) fame is the writer of the series.

Amin Iqbal who is the director of this drama previously helmed Deedan (2018). Iqbal sheds light on the drama, saying:

“It’s a beautiful family play, full of emotions, penned by the famous and seasoned writer Saima Akram. ‘Kaala Doriya’ is like a baby for her.

“She has a style of writing, though this is different from what she has written before.”

The project falls under the famous banner of Momina Duraid Production. 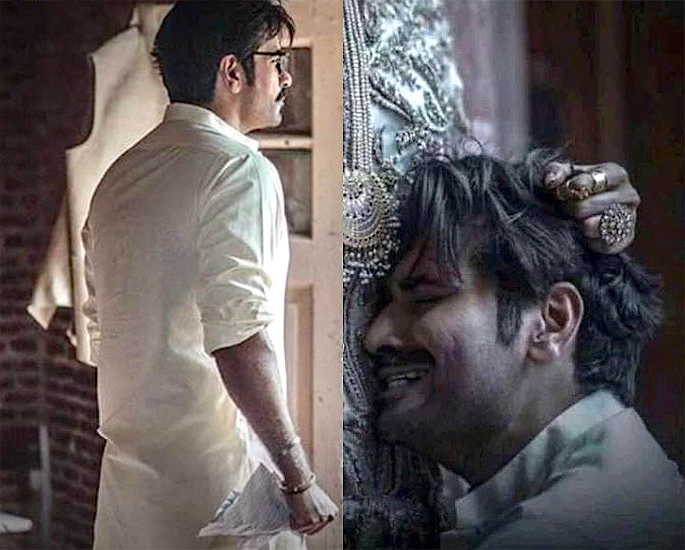 Main Manto Nahi Hoon is one of ARY Digital’s upcoming Pakistani dramas, which many are getting excited about.

The impressively gifted Khalil-Ur-Rehman Qamar, popular for his dialogues, has written this drama.

With Nadeem Baig in charge as the director, the drama is a Six Sigma Plus production. It is the same dream team that made the super-hit drama, Mere Paas Tum Ho (2019).

Humayun Saeed and Maya Ali are playing the lead characters for the first time together. The drama will be an emotional love story in the Urdu language.

No doubt there will also be some other fine supporting acts for this mega drama. 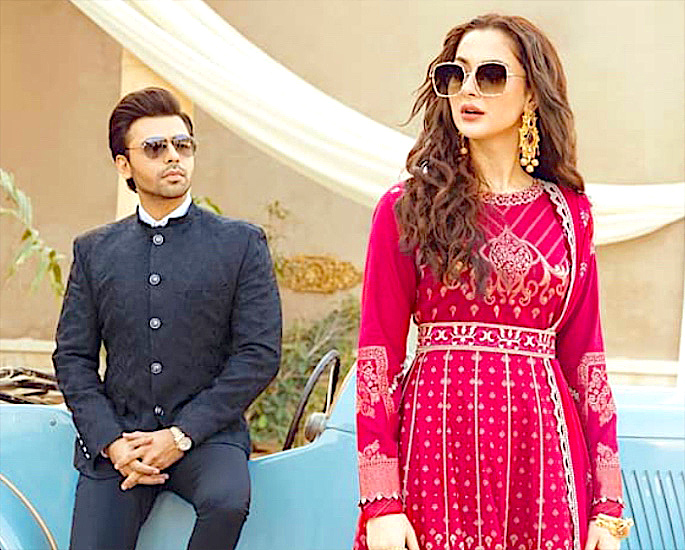 Mere Humsafar is one of the most anticipated family Pakistani dramas for 2022. Farhan Saeed and Hania Aamir will pair up together for the first time on screen.

On August 15, 2021, director Qasim Ali Mureed went on Instagram to share a short clapperboard video clip of the drama.

Penned down by Saira Raza, Six Sigma Productions are the producers of Mere Humsafar, which will transmit on ARY Digital.

With many describing it as a “powerful love story,” the drama also has a family angle in the middle of it. In a conversation with Cutacut, Qasim confirms this and the unconventional character of Hania:

“Of course it is a family drama so there is going to be a family involved, but within that, there is a beautiful love story, there are intense emotions.

“I’m sure it is going to be a treat to watch for Hania’s fans, along with Farhan’s.”

Saba Hamid, Samina Ahmed, Angeline Malik, Zoya Nasir, Waseem Abbas, and Osama Tahir are the other names to feature in this drama. 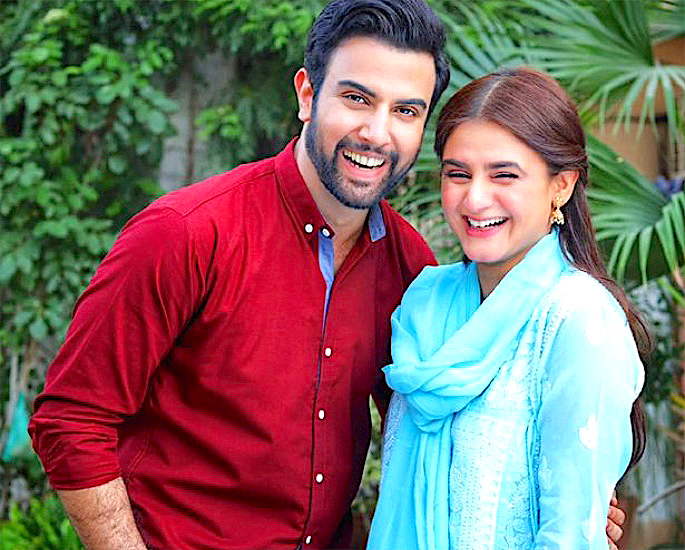 Qismat is a Pakistani family drama, coming to your television screens on ARY Digital. Ali Raza Usama who had previously directed Bashar Momin (20214), takes the director’s chair for this drama.

Sana Shahnawaz and Samina Humayun are the producers of Qismat.

Noor Hassan and Hira Mani are the lead pair in this drama. On October 16, 2021, Noor went on Instagram to share a few pictures from the set with Hira.

Complimenting his co-star and enjoying the shoot, he also wrote:

“Such a pleasure working with Hira again. An amazing human being inside out ?? Qismat, Coming Soon! Having fun with the wonderful cast of Qismat, Stay tuned!”

“I can’t disclose much else but the story is very interesting and it’s great fun working with Usama as the director.”

According to Images, she plays a working woman who also takes care of the home. Also part of this drama is Muneeb Butt and Aiza Awan. 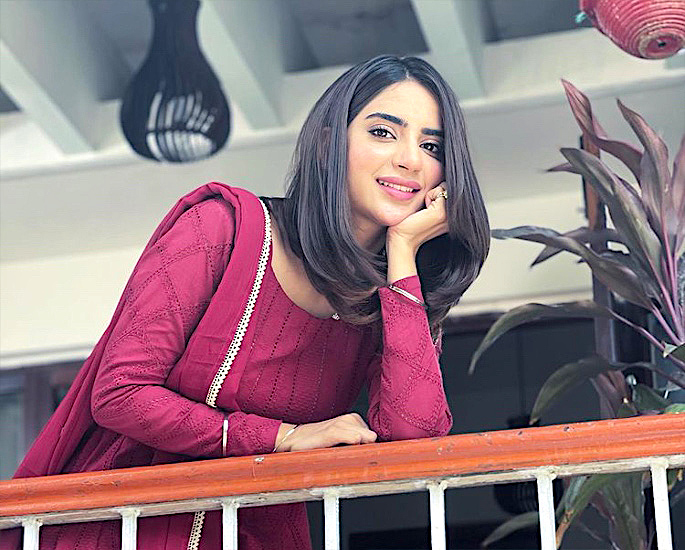 Shaam Se Pehle is a Pakistani drama that ARY Digital will be bringing on their channel. The drama sees the coming together of Shahroz Sabzwari and Saboor Aly.

Ahmed Bhatti who has many other Pakistani dramas under his credit is the director of Shaam Se Pehle. Nadia Ahmed is the writer of this drama, which is an IDream Entertainment Production.

On July 15, 2021, Saboor took to Instagram, sharing an image of herself wearing a maroon pishwas (dress), along with introducing her character:

“Imaan is excited to meet you all ?#Shaamsepehle”

The audience will see Saboor, Shahroze, and Usama appearing in the same space for the first time. 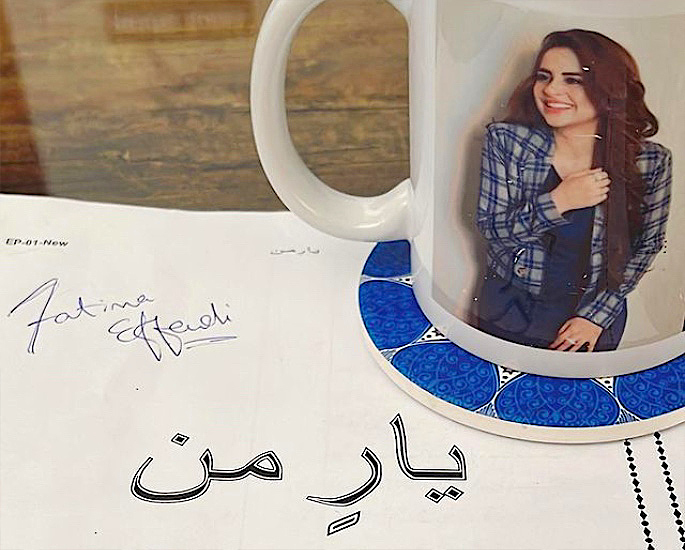 Yaar-e-Mann is one of the Pakistani dramas, which will be aired on GEO TV. The drama may well be an adaptation from a namesake fiction novel.

Actress and model Fatima Effendi who has come in several other Pakistani dramas stars in Yaar-e-Mann.

On November 15, 2021, Fatima went on Twitter to share an image of the script, mentioning the name of the drama and episode.

A mug also lies on the script, with a picture of Fatima on it. The image came with a caption reading:

It will be interesting to see who the other cast members will be for this Pakistani drama. 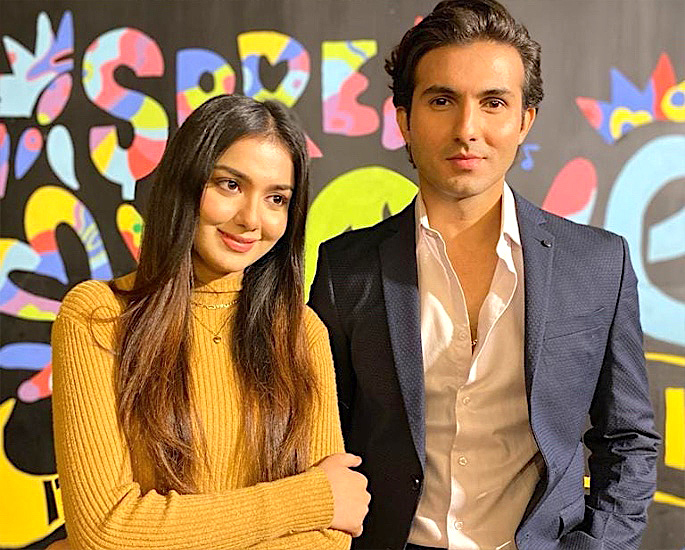 Yeh Ishq Samaj Na Aaye is a Pakistani drama, which will have a romantic aspect to it. The drama will be broadcast via one of Pakistan’s entertainment channels.

Shahroz Sabzwari and Syeda Tuba Anwar are the lead stars teaming up for this drama.

Working together for the first time, Syeda told Dawn Images that “he’s [Sharoz] a great support, and they “instantly connected.” She adds, how director Jasim Abbas appreciates the leading pair:

“He makes sure that I am comfortable and supports me. The director is loving our on-screen chemistry.”

Syeda portrays the role of Nimra who comes from a wealthy family, going the extra mile for love. She explains that her character’s personality is “dynamic” and “powerful.”

Syeda also reveals that Munim Majeed is the writer, with the drama shoot taking place in Islamabad. The producer Ali Sheroz is also involved with the shooting, with a young team.

There will be many other dramas releasing in 2022, as we go along.

Our list is just a snapshot, giving the audience a taste of what is to come. It seems viewers are in for a treat in 2022.

Faisal has creative experience in the fusion of media and communication and research which increase awareness of global issues in post-conflict, emerging and democratic societies. His life motto is: "persevere, for success is near..."
Alia Bhatt Recreates Iconic ‘Poo’ Scene from K3G
Fawad Khan admits He Misses Bollywood