A woman has been jailed for being in possession of a sawn-off shotgun that ended up being taken into a Bedfordshire school.

"Guns are a blight on our society.”

Keesha Kalyan, aged 21, of Cowley, Uxbridge, was jailed for three years for being in possession of a sawn-off shotgun and ammunition.

She was just 17 when she was looking after the weapon and ammunition for someone.

Both were stashed in the bag of a school pupil and ended up being taken into a Bedfordshire school in October 2018.

The weapon was found in the bag of a 15-year-old boy at Kempston Challenger Academy, sparking a major alert at the school.

Police found text messages between Kalyan and the pupil discussing a ‘dotty’ – urban slang for a shotgun – being taken into Kalyan’s home address.

Another message asked the boy not to say anything about it.

When police arrested the boy, Snapchat messages referencing the weapon were found.

Police subsequently arrested Kalyan, who was living in Bedford at the time.

Her fingerprints were found on the bag containing the shotgun, but when questioned, Kalyan claimed that the ‘dotty’ she was referring to in the text messages was a religious ornament.

In November 2021, Kalyan was convicted of possessing a prohibited firearm.

Defending, Ahmed Muen said Kalyan had never been in trouble before but it was her fault the shotgun ended up at the school.

He said: “She was the custodian and was being groomed by a person she was besotted by.” 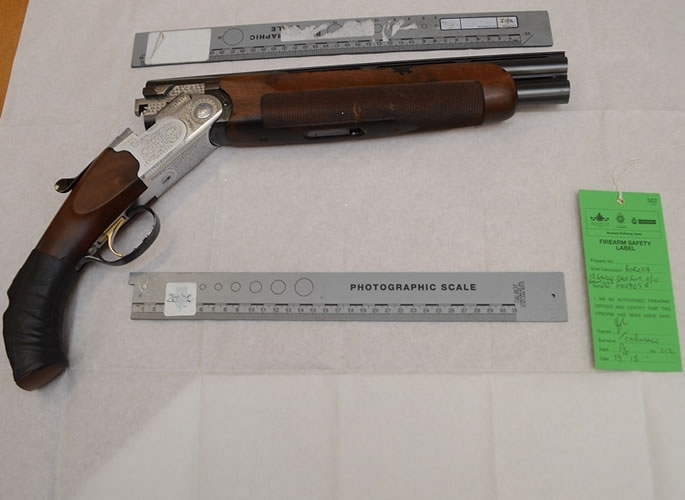 Mr Muen said Kalyan’s two children were in social services, but she saw them every day and was intent on bettering herself.

He added: “She keeps different company now and asks for a chance. She has not been in trouble since and is throwing herself on the mercy of the court.”

Judge Gary Lucie said: “The defence say you have turned a corner, but unfortunately you chose not to be straightforward and honest.

“This was a serious offence and one that could have had fatal consequences. Guns are a blight on our society.”

Kalyan was jailed for three years.

“We can’t stress enough that if you are caught carrying any kind of illegal firearm, even if it is an imitation one, there will be a price to pay and this is likely to be in the form of a stint in prison.

“Using the excuse that it isn’t yours or that you are carrying it for your own protection simply won’t wash with us.”

“Carrying a prohibited weapon can lead to devastating consequences, for not only the individuals involved but for the families of those who get hurt through such actions.

“If you have concerns or feel like you are being forced, bullied or coerced into storing a gun for someone, please speak to us and we will try to help you.

“Fortunately, gun crime remains extremely rare in Bedfordshire and by working alongside our partners, recorded incidents of serious youth violence fell by 24% in Bedfordshire in the 12 months to April 2021, compared to the same timeframe to April 2019.

“We will continue to do all we can to stamp out such criminality and make sure that those responsible for inciting such violence are held accountable for their actions.”

Dhiren is a journalism graduate with a passion for gaming, watching films and sports. He also enjoys cooking from time to time. His motto is to “Live life one day at a time.”
Indian Woman knifed Fiance as She didn’t want to Marry Him
US Vice President Kamala Harris tests positive for Covid-19