What are e-Scooters & Are they Legal?

In the UK, there has been a massive rise in the use of e-scooters on the streets. But what are they and are they legal?

Sales of e-scooters have risen massively

The UK has seen an increase in the use of e-scooters.

More and more people are seen riding this new form of transport on Britain’s roads and pavements.

They have grown in popularity in recent years for their ease of use, portability and environmentally friendly qualities.

This has seen them used in place of bicycles and even cars.

However, there is a lot of uncertainty surrounding e-scooters, such as how they are used and the legality of riding them.

DESIblitz explores the use of e-scooters and whether they are legal or not. 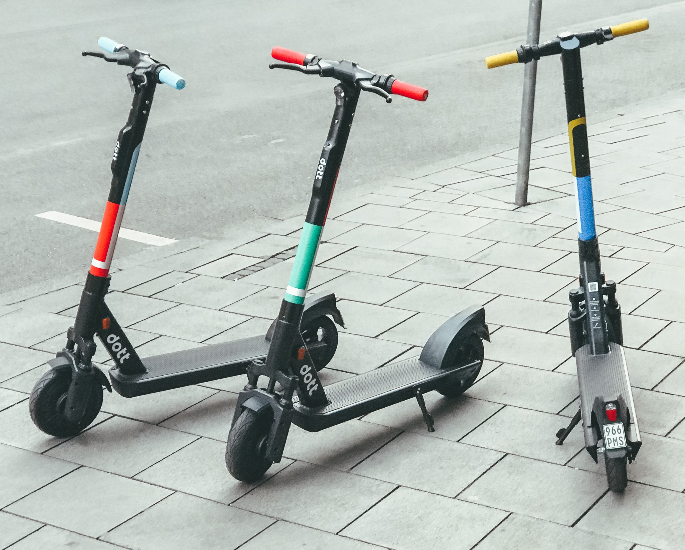 Sales of e-scooters have risen massively during the pandemic.

Speeds are limited at 15.5 mph but they can be modified to reach speeds of 70 mph.

As they are powered by electricity, they have grown in popularity, with scooter-sharing schemes now running in more than 100 cities around the world.

This scheme is set to be introduced in London, as a trial of the vehicles is set to launch in the capital later in 2021.

This is due to e-scooters being hailed as a greener, more sustainable mode of transport that can reduce traffic congestion.

It has already been trialled in other UK cities. 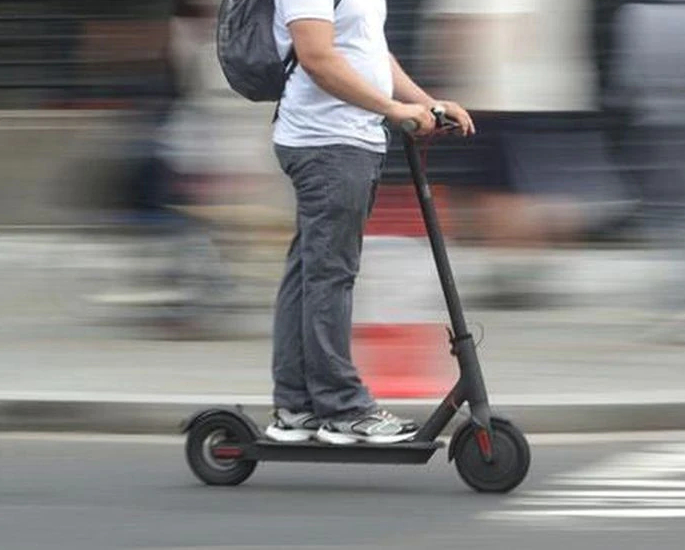 People in the UK can buy an e-scooter, however, it is illegal to ride one on a public road, cycle lane or pavement.

They can only be used on private land, with the permission of the landowner.

This is because they are classified as Personal Light Electric Vehicles (PLEVs), so they’re treated as motor vehicles and are subject to all the same legal requirements – MOT, tax, licensing and specific construction.

Because they do not always have visible rear red lights, number plates or signalling, they cannot legally be used on the roads.

But rental trials could change things.

In dedicated locations, rental scooters from select companies were trialled, with conditions including a ban on pavement use, a speed limit of 15.5 mph and riders required to be at least 16-years-old with a full licence.

“E-scooters may offer the potential for convenient, clean and cost-effective travel that may also help ease the burden on the transport network, provide another green alternative to get around and allow for social distancing.”

Although e-scooter rules are subject to change, currently those who are caught using a privately-owned e-scooter on public roads could receive a £300 fine, six licence penalty points and the possibility of having the e-scooter confiscated.

Fines and points will be in effect when using a rental e-scooter as part of the trials.

This reflects the laws around driving a motor vehicle such as running red lights, riding on the pavement, using a mobile phone or going over the e-scooter speed limit.

Users must also park them in designated areas or risk being fined.

Where are they being Trialled? 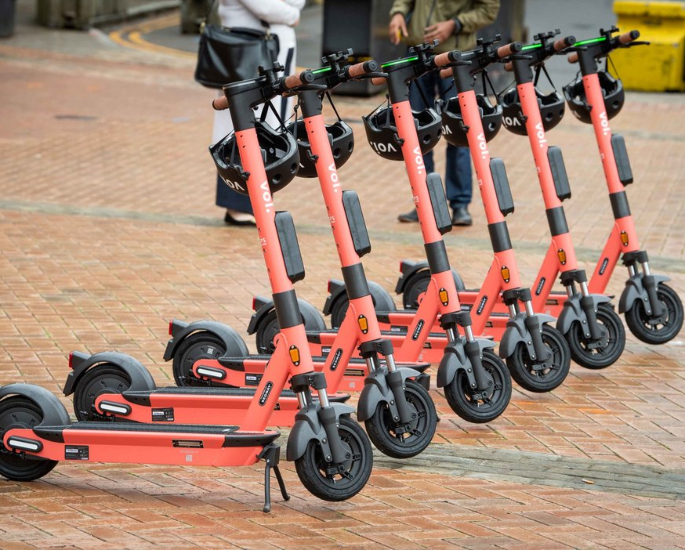 In addition to London, rental e-scooters are being trialled in more than 40 towns and cities across England.

Birmingham, Bristol and Newcastle are just some of the locations.

In London, it is expected that e-scooters will be deployed in 11 out of the 33 boroughs in May 2021.

A spokesperson for Transport for London (TfL) said it was in the “final stages of the procurement process” and an announcement on the outcome will be made “in due course”.

E-scooter company Voi is involved in trials in 21 towns and cities.

It said it has recorded more than one million rides in just over six months.

Sam Pooke, the firm’s public policy manager, said e-scooters were “easing the pressure” on public transport systems and providing a “socially distanced way to travel” during the pandemic.

“We’re helping people to use a more sustainable, green way of getting around.”

“That, in turn, improves air quality, it improves health, it decreases congestion on the roads and it makes cities much easier and much better for living.” 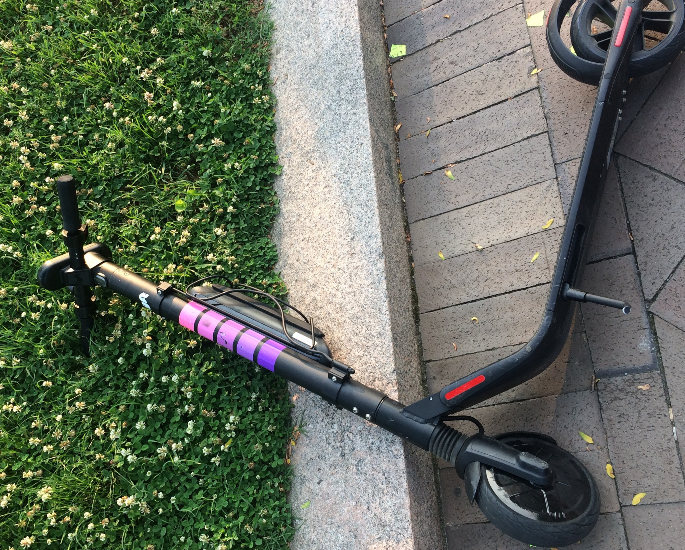 While the trials are set to be introduced in London, misuse concerns were raised after trials in other UK cities.

Newcastle introduced an overnight curfew for e-scooter riders after a series of drink-driving arrests.

A councillor in Merseyside called e-scooters “orange death traps” after seeing people riding them on pavements in Liverpool.

Meanwhile, in Leicester, where e-scooters are not being trialled, a six-year-old boy suffered a fractured skull after being struck by a teenager riding one of the vehicles.

Jamie Smith was knocked unconscious outside his home in August 2020.

The 17-year-old rider, who failed to stop after the collision, was sentenced to 12 months’ youth custody.

Jamie’s sister Brooklyn Smith has called for e-scooters to be made safer to avoid others getting hurt.

“I don’t think we can get to the point where we can ban them all together.”

“I think they definitely need to make them a lot safer and help make sure this doesn’t happen to another child again.

“They need to have some form of testing where if you’ve got points on your licence or anything like that because you’ve been driving without a licence or driving irresponsibly, you shouldn’t be able to go on (an e-scooter).”

Concerns over parking them in designated areas were raised after more than 100 e-scooters were left outside a man’s home in Bristol.

Shane Clarke said they were left outside his home after the area was made an official parking spot.

He believed that other locations were removed from the list of designated parking spots listed on an official app.

As a result, it left his house as the only place to park the e-scooters in the area.

Concerns first came to light in July 2019 when YouTuber Emily Hartridge became the first e-scooter rider to be killed in the UK.

An inquest found she lost control due to an underinflated tyre when she collided with a lorry in Battersea. 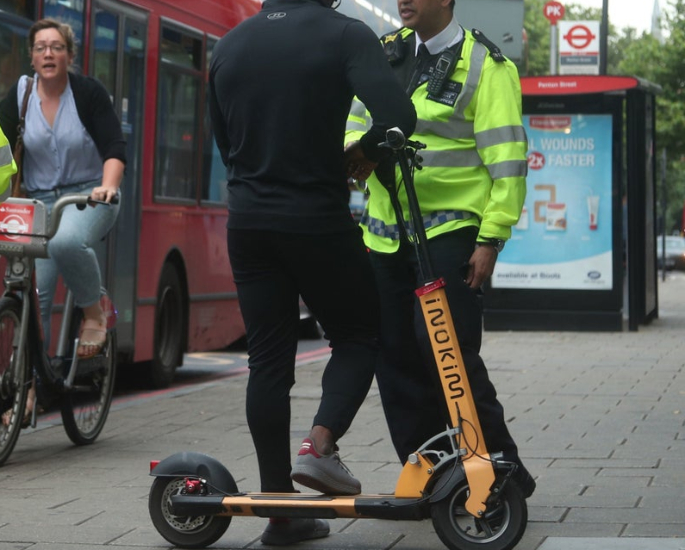 While there have been instances of e-scooter misuse, there have also been cases where the vehicles have been used for crimes.

Criminals are using the devices as getaway vehicles as well as in robberies. Assaults and shootings are also prevalent.

In 2020, the Daily Mail reported that Scotland Yard recorded more than 200 incidents in London. During that time, more than 150 e-scooters were seized.

A 14-year-old boy was stabbed to death in East London before his e-scooter was stolen.

Fares Maatou was stabbed and repeatedly hit over the head with a metal bar on April 23, 2021, outside a pizzeria.

The attackers then made off with his e-scooter. The investigation is ongoing.

Meanwhile, in Norfolk, more than 120 incidents were recorded in 2020.

One incident included an e-scooter pulling a small trailer on a main road and “swerving from side to side”. 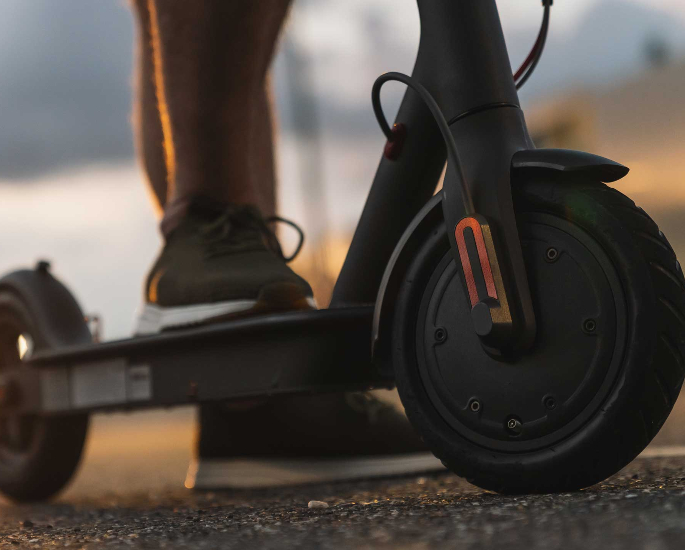 To “battle against drunk-riding”, people have to pass a reaction test to use a Voi e-scooter at night.

Those who fail are sent a link to a local taxi service.

According to Mr Pooke, there have been some reports of “slight injuries” but “accident data is remarkably low”.

He explained that the “vast majority of our users are riding them responsibly and safely” but added:

“Unfortunately there is a very small minority who ride irresponsibly, such as going on the pavement.”

“The best way to tackle this is to work collaboratively with our council partners and the police.”

Neuron is another e-scooter company and it operates in Newcastle.

It said there had been “some issues with a very small proportion of riders not following the rules and people parking the e-scooters irresponsibly”.

But as part of Newcastle’s e-scooter overnight curfew, Neuron immobilises its e-scooters between 11 pm and 5 am.

This has led to an “immediate and significant reduction in the number of reports of irresponsible riding”.

Neuron added: “Overall the vast majority of users abide by the rules and behave in a safe and responsible manner.

“For those who do break the rules, we generally warn and educate them further and usually cases of repeat offending are rare.”

With trials for rental e-scooters continuing to be rolled out in the UK, it looks like the popularity for them will continue to rise.

However, laws will have to be carefully looked at to ensure the safety of riders and pedestrians.

They may be more economically friendly than cars but the concerns surrounding e-scooters still remain.

Dhiren is a journalism graduate with a passion for gaming, watching films and sports. He also enjoys cooking from time to time. His motto is to “Live life one day at a time.”
Bill Gates and Wife Melinda announce Their Divorce
Harpreet Singh Rai’s Oura Sleep Tracker raises $100m