Takeaway bosses Mohammed Abdul Kuddus and Harun Rashid have been jailed for the death of teenager Megan Lee, caused by an allergic reaction to their food.

Takeaway owner Mohammed Abdul Kuddus, aged 40, and manager Harun Rashid, aged 38, were both jailed for their part in the death and manslaughter of 15-year-old Megan Lee caused by an allergic reaction to food ordered from their business.

The bosses, who are both Bangladeshi nationals, ran the Royal Spice takeaway in Oswaldtwistle, Lancashire. They were sentenced on Wednesday, November 7, 2018, at Manchester Crown Court following a two-week trial.

Harun Rashid, from Haslingden, was jailed for three years and Mohammed Abdul Kuddus, from Blackburn, was given two years in prison.

During the trial, the court heard that there was a ‘litany of failings’ in the kitchen of the takeaway which included poor hygiene and no records kept of ingredients used in their food.

The pair were both found guilty by the jury in October 2018 for the unlawful death of Megan Lee by reason of gross negligence.

The food was ordered from their takeaway by Megan and her friend online via the Just Eat website two days prior to the allergic reaction she had from the food, due to the presence of ingredients related to nuts.

When ordering she wrote “prawns, nuts” in the comments and notes section.

The meal which was delivered by the takeaway, which included a seekh kebab, a Peshwari naan and an onion bhaji was subsequently found to have the “widespread presence” of peanut-related protein.

The food instigated an asthma attack in Megan, who was a nut allergy sufferer.

Her mother, Gemma Lee, tried to give Megan the kiss of life twice and carried out chest compression as her daughter struggled for her life.

Megan was then rushed to hospital but died two days later, on January 1, 2017.

The takeaway was then closed down immediately after an inspection by Trading Standards and environmental hygiene officers, five days after the incident.

During the trial, Rashid tried to claim that he was just the delivery driver.

However, Rashid was found guilty of failing to discharge a general duty of employers, contrary to the Health and Safety at Work Act, and another count of failing to put in place, implement and maintain a permanent procedure or procedures in contravention of European Union food safety regulations. 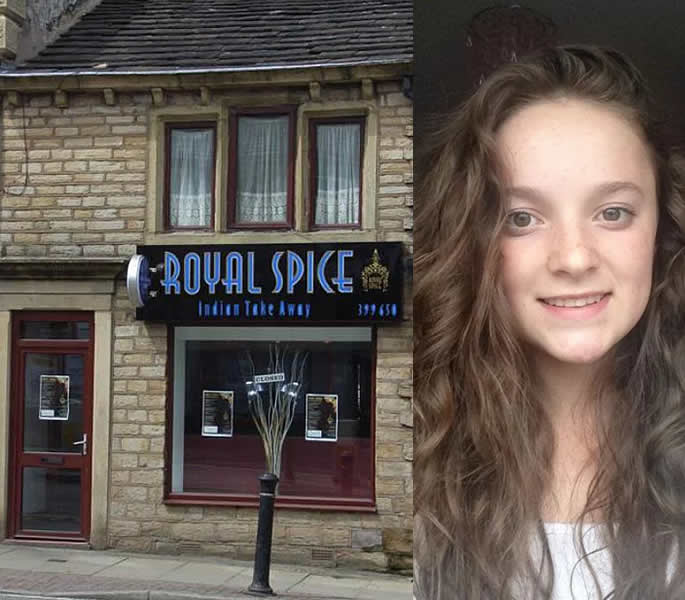 Jailing the two men, Judge Mrs Justice Yip said although Megan was responsible enough to highlight the allergies she suffered from when she placed the order, “sadly the same responsibility was not at your end”.

Highlighting systematic failings of their food business, the judge said:

“The Royal Spice had no systems or processes to manage allergen control. The menu contained no information about allergens. No record was kept of the ingredients used in dishes.

“In short, it appears that no one at the takeaway had any way of knowing what allergens were in the food supplied.”

Using this case, the judge sent a warning to others in the food business, saying:

“It is hoped that the message is heard that those who fail to take proper care in the supply of food to the public will face significant custodial sentences if a death results.”

“Like Mr and Mrs Lee, I hope that this tragic case adds to the growing awareness in the food industry of what can happen if allergies are not taken seriously.

“Those who fail to heed the warnings and who continue to flout food safety regulations may find the courts taking a harsher view in the future.”

Mr and Mrs Lee, who also have a younger son, made a statement in court revealing their sorrow and the impact of their loss saying:

“We remember the day we came home from hospital and knowing we could not do anything for Megan.”

“Our perfect family bubble has been shattered apart, the impact it has had on us has changed our life completely.

“We struggle from day to day, the fact we could not protect Megan has changed our lives, we question every minute of that day and it is the day our lives turned into a nightmare.”

Praising the “dignity and courage” shown by Megan’s parents Adam and Gemma during the trail, Mrs Justice Yip said:

“They do not seek retribution but want their story to serve as a warning to others in the food industry so that other families will not be forced to experience the indescribable loss that they have suffered.

“She [Megan] had made her family proud throughout her short life and would have continued to do so. She had everything to live for. No sentence I impose can begin to reflect the loss of Megan’s life.”

The judge acknowledged that both the men sentenced did not mean to kill Megan and expressed genuine remorse over what happened, being fathers themselves, saying:

“Neither of you actually foresaw the death of anyone. It never occurred to you that you would be responsible for the death of a young girl. Quite simply, you never gave the risk of a customer dying because of an allergy a moment’s thought.

“You must now live with the guilt of what you have done and the suffering you have caused Megan’s family and to your own families. All of this is a tragedy that could so easily have been avoided had you exercised the proper care to be expected of those who serve food to the public.”

After the case, outside the court, Megan’s parents made a plea to other food businesses operating “in such a deplorable and ignorant manner” and requested they learn from the case and urged them “not play Russian roulette with precious lives”.

Nazhat is an ambitious 'Desi' woman with interests in news and lifestyle. As a writer with a determined journalistic flair, she firmly believes in the motto "an investment in knowledge pays the best interest," by Benjamin Franklin.
Unemployment of British Pakistanis and Bangladeshis to be Combated
Trio Jailed for Daylight Machete Attack on Man