Three men have been jailed for a total of 43 years after launching a machete attack in broad daylight which left a man with life-threatening injuries.

"This was a savage attack that left the victim with life-threatening injuries."

Three men, all from Birmingham were jailed for a total of 43 years on Monday, November 5, 2018, at Birmingham Crown Court after attacking a man with a 12-inch machete.

Amir Hussain, aged 23, Zain Islam, aged 23 and Hussan Yousaf, aged 21, cornered the victim and attacked him with the blade.

It was heard that the man had been driving his mother to a doctor’s appointment when the incident happened on May 22, 2018.

The trio chased the 23-year-old victim off the road in Small Heath, Birmingham in a stolen pick-up truck. The man’s car later smashed into bollards and knocked down a wall outside Aubery Road GP surgery.

As the victim climbed out of the car and tried to help his mother, he was set upon.

Hussain ran at the man, plunging the blade deep inside his arm.

The man begged the three men not to hurt his mother as he was slashed across the torso.

They sliced his stomach open and left him with a deep cut to his arm before fleeing the scene in the truck, driven by Islam.

It was heard that the man was saved from bleeding to death by a nurse who rushed out of the surgery to come to his aid.

“This was a savage attack that left the victim with life-threatening injuries.”

“In fact, had it not been for the swift actions of a nurse who ran to his aid he may well have died.”

“The victim, who has not been able to provide a motive for attack, was understandably panicked and in his bid to get away collided with bollards and a wall.”

He was placed in an induced coma as a result of the injuries he suffered.

CCTV captured the moment when the victim’s car crashes into the wall and is attacked with the machete. 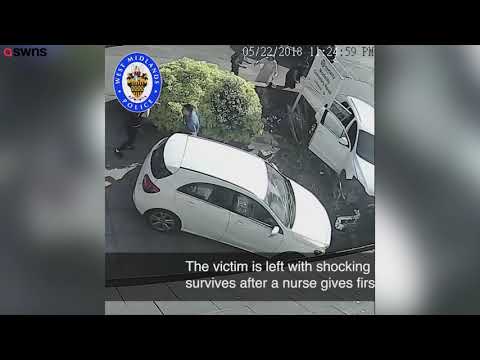 DC English added: “He pleaded with the men, who he knew from the local area, for calm and urged them not to hurt his mother.”

“But Hussain immediately began hitting out with the machete.”

Witnesses provided police with the registration plate of the vehicle and it was intercepted at Warwick services where two teenagers were detained.

Forensics revealed traces of the victim’s blood and Yousaf’s fingerprints on the bodywork.

Police received a tip-off that the attackers were staying at a hotel in Attercliffe, near Sheffield. They were found on June 9, 2018.

Drugs were found in the room, alongside almost £6,500 in cash.

The three men were arrested, but all three refused to answer any questions during the interview.

They denied attempted murder but were found guilty of the charges.

“The victim was placed in an induced coma and thankfully pulled through following surgery.”

“But he has been left with scarring and the psychological impact of such a traumatic event.”

“I’m pleased the courts have taken these three dangerous men out of society for a significant period of time.”

Amir Hussain was jailed for 17 years, while brothers Zain Islam and Hussan Yousaf were both sentenced to 13 years in prison.

Dhiren is a journalism graduate with a passion for gaming, watching films and sports. He also enjoys cooking from time to time. His motto is to “Live life one day at a time.”
Two Takeaway Bosses jailed for Death of Girl with Nut Allergy
Indian Woman Dies after Gang Rape and Stick inserted in Her