Self-acclaimed critic KKR has been called out and maligned for his hypocrisy on Twitter with the hashtag #DeshdrohiKKR trending.

"He is dead but I won’t die. I will fight it out with entire Bollywood alone.”

Kamaal Rashik Khan a.k.a. KRK is not new to the world of controversy.

Actor and self-proclaimed critic KRK has once again found himself in the eye of the storm brewing across Twitter.

A popular Youtuber KRK has insulted, debunked and criticised many Bollywood films and actors.

As a ploy to gain further popularity, after the death of Bollywood actor Sushant Singh Rajput, KRK started circulating many unfounded rumours about the actor.

The death was ruled a suicide by an All India Institute of Medical Sciences (AIIMS) report. However, India’s Central Bureau of Investigation (CBI) is still probing the case.

After Sushant’s death, it was alleged by some that he was a victim of nepotism in Bollywood and was dropped from multiple projects because of being an outsider.

In October 2015, KRK claimed harassment by members of the film fraternity.

He said that late actor Sushant Singh Rajput was similarly bullied and wanted to leave Mumbai out of ‘fear’.

In a tweet, KRK declared that he will single-handedly fight against Bollywood, writing:

“Bollywood people bullied #SushantSinghRajput in the same way as they are bullying me and forcing me to leave Mumbai.

“Sushant Singh also wanted to leave Mumbai to settle down somewhere else coz of fear.

“He is dead But I won’t die. I will fight it out with entire Bollywood alone.”

In response, Sushant’s fans across the country have been dug deep in KRK’s Twitter feed to create a collage of the previous claims he has made about the deceased actor. 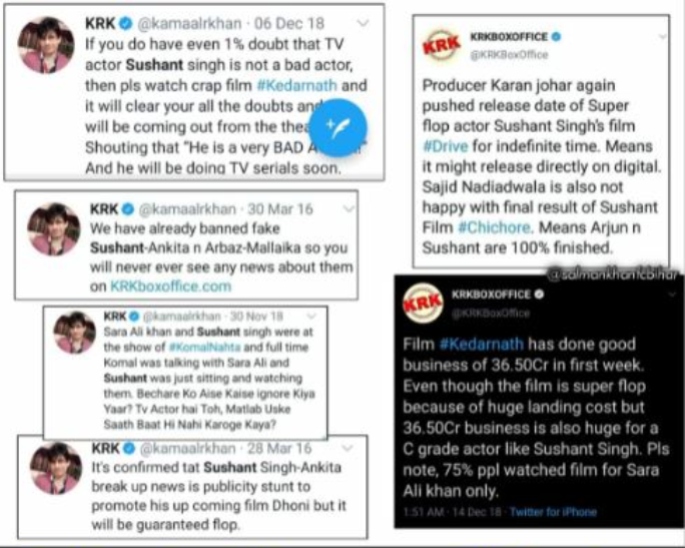 Shared from his personal handle and his box office page, the tweets found are very cynical and attempt to degrade Shushant and his acting capabilities.

“If you have 1% doubt that TV actor Sushant Singh is not a bad actor, then plz watch crap film #Kedarnath.

“It will clear all the doubts and will be coming out from the theatres Shouting that “He is a very BAD Actor” And he will be doing TV serials soon.”

Another tweet he apparently posted on March 28, 2016, on the micro-blogging site read:

“It’s confirmed that Sushant Singh-Ankita breaks up news is a publicity stunt to promote his upcoming to film Dhoni but it will be guaranteed flop.”

RT If You Think KRK Is The Biggest Hypocrite & Disgrace In The Whole Movie Industry.. ? #WigUtaarKRK

The term ‘desh drohi’ meaning a ‘traitor to their country.’

KRK has willfully and maliciously turned the suicide of a member of the Bollywood fraternity into an opportunity to increase his follower base.

Twitter users have taken to calling him out and accusing highlighting his hypocrisy on the same.

Akanksha is a media graduate, currently pursuing a postgraduate in Journalism. Her passions include current affairs and trends, TV and films, as well as travelling. Her life motto is 'Better an oops than a what if'.
Is this Shah Rukh Khan’s Look for Pathan?
Nawazuddin Siddiqui reveals having ‘done Films just for Money’