Stunning performance by Anita and Gleb in Strictly

Week 3 of Strictly Come Dancing sees Anita Rani channel her inner Demi Moore for ‘Movie Week’ alongside Gleb Savchenko. Find out how she got on here.

"I loved that crawling across the floor, I thought it was absolutely wonderful.”

10The third week of Strictly Come Dancing sees a nostalgic trip to the movies for the celebrity contestants and their dancing professionals.

Tying in some iconic films with this week’s dance routines, the professionals have their work cut out with recreating an Oscar-winning performance on the dancefloor.

Following the departure of Iwan Thomas and Ola Jordan last week, the 14 remaining dance couples are even more eager to please the judges and viewers.

After a fabulous group dance that takes us down cinematic memory lane to open the show, weather reporter Carol and partner Pasha are up first.

South Pacific is their film inspiration for an exotic quickstep. The fun dance to ‘Wash That Man Right Out Of My Hair’ sees a more confident Carol than previous weeks. 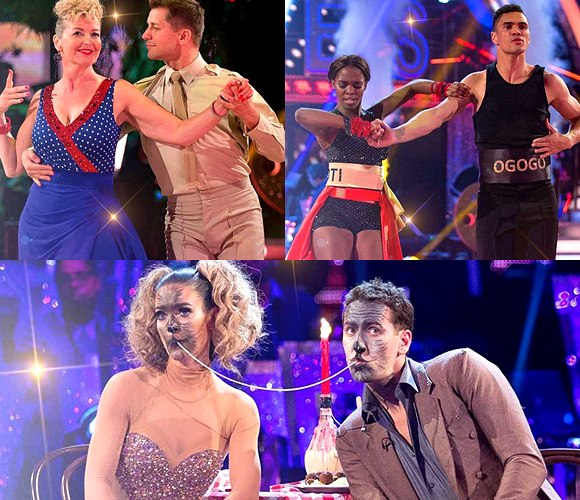 But Judge Craig puts a dampener on their performance, calling it: “Limp, lame, and rather lacklustre.” The pair manage only 17 points.

Next up is boxer Anthony Ogogo and Oti Mabuse, who don’t fare much better despite their Rocky soundtrack. They get 19 points, the same as last week.

Katie Derham’s killer legs aren’t enough to win over the judges this week. Instead the Strictly critics slam her and partner Anton du Beke for too much posing and little cha cha cha choreography in their Pretty Woman skit.

The next few performances are a mixed bag. Kellie Bright and Kevin Clifton do a fantastic job of incorporating Star Wars lightsabers into their Charleston.

Ainsley Harriott and Natalie Lowe don’t impress with their Happy Feet Boogie Wonderland, while Georgia May Foote and Giovanni Pernice a sizzling performance with a James Bond rumba!

Helen George stuns as Marilyn Monroe with a gorgeous foxtrot from the film, Some Like it Hot. 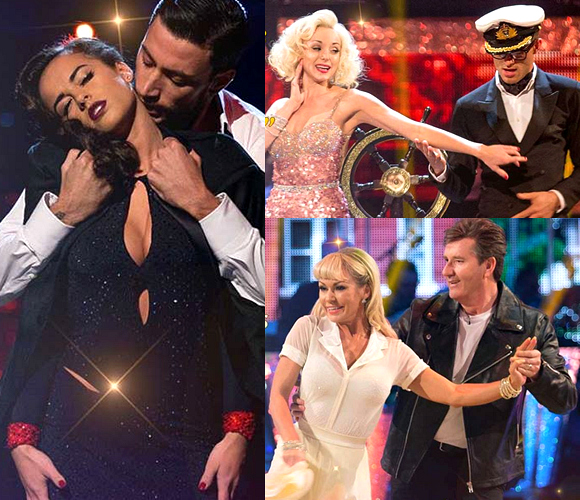 Daniel O’Donnell and Kristina Rihanoff take on ‘Summer Lovin’’ from Grease, but sadly fail to pull off their cha cha cha.

Kirsty Gallacher and Brendan Cole have a fun fancy dress up moment as dogs for Lady and the Tramp. Their American Smooth has little touches of adorable canine which is applauded by the judges as a great improvement from last week.

Peter Andre and Janette Manrara take on Pirates of the Caribbean with a passionate Paso. Andre certainly has the swagger of Captain Jack Sparrow.

Len says: “You’re no Sparrow, you’re an Eagle!” The pair are on a high again with 28 points.

Jamelia is applauded for her great rhythm by Darcey, while Jeremy Vine surprises with a great Charleston, that leaves Len speechless: “It was genius!” 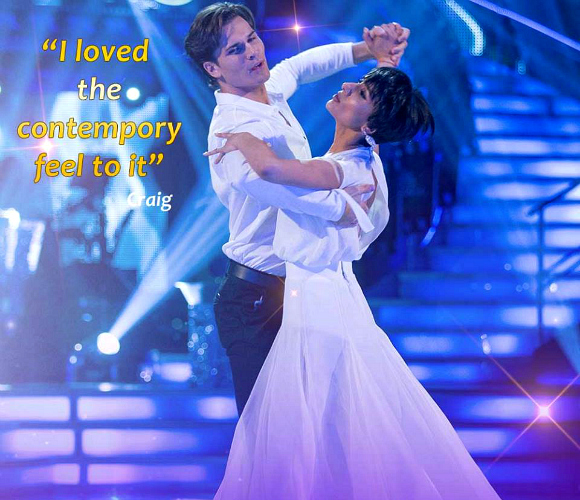 Paying homage to their movie theme, Ghost, Gleb takes Anita to a pottery lesson to help them get into character.

The pair’s American Smooth is stunningly sensual and Anita dazzles with a short bob and a flowy white dress.

Midway we see a #GlebSpecial as he crawls over Anita on the floor before lifting her up into the air.

Bruno calls the performance ‘haunting’, while Len says it had just the right balance of dancing and theatrics.

Craig says the dance lacked ‘finesse’, but puts this down to a lack of experience. He later adds: “I loved the contemporary Viennese nature. I loved that crawling across the floor, I thought it was absolutely wonderful.”

Darcey says: “It was very, very good.” The couple get their highest score so far with 29 points.

Ending the show are singer Jay McGuiness and Aliona Vilani who tackle the jive from the film, Pulp Fiction. 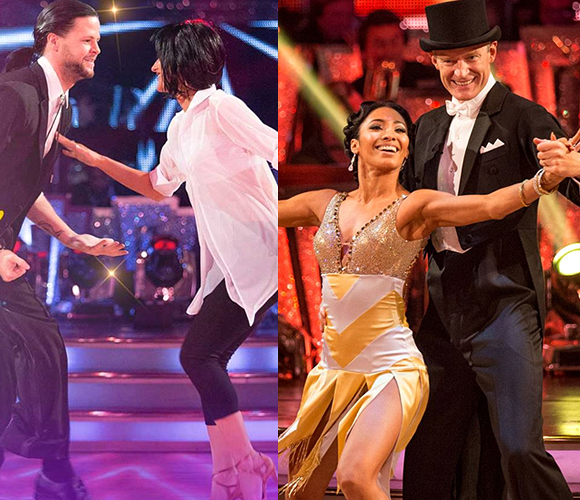 The couple are brilliant with a highly technical performance, that shows off Jay’s natural dancing talent.

The judges are left in awe, with Craig even saying:

“That is a level of technique we have never seen ever in a male celebrity. Amazing!”

Bruno scores the pair the first 10 of the series, and the dancing pros soar to the top of the leader board with 37 points.

That’s all the dancing done for the evening, and the contestants must now wait for Sunday to see who will be eliminated.

Make sure you catch the results show of Strictly Come Dancing, on Sunday 11, October at 7:15pm on BBC One.