A Kolkata resident posted a picture wearing red lipstick after his mother was slut-shamed at a family gathering. The post has gone viral.

“Here I am, a man with a full face of beard and red lipstick."

Comments about his mother’s choice of red lipstick at a family get-together prompted Kolkata resident Pushpak Sen to post a picture on Instagram.

The picture and accompanying caption show a bearded Pushpak with bright red lipstick and kohl-lined eyes. It has since been widely shared on social media, with many praising him for taking a stand.

As per a report in The Indian Express, in the post accompanying the picture, Pushpak wrote about what had happened:

“My mother, a woman of 54 years, got slut-shamed, by some of our nearest relatives, for wearing a red lipstick at a family get-together.”

Pushpak’s 54-year-old mother was slut-shamed for wearing red lipstick at a family function.

Lipstick is the most staple beauty product, however, there are many stereotypes that are attached to certain shades of the product or use of it, especially for those who aren’t young.

Pushpak highlighted one such incident and said: “Here I am, a man with a full face of beard and red lipstick”.

Pushpak took to social media to share a powerful message. While sharing a picture of himself wearing a bright red shade of lipstick and eyeliner, Pushpak revealed that he sent a “Get well soon” message to his relatives the next morning.

Pushpak said he posted the image on social media so that his relatives could see he was not afraid of posting a picture in red lipstick which “would question my masculinity”.

“Here I am, a man with a full face of beard and red lipstick.

“Here I am, standing up for all the mothers, sisters, daughters, non-males and all the womxn who have had to suppress their desires because of the toxicity of an insecure society.”

The 25-year-old narrated his entire experience on Facebook and said that his picture stands for people from binary and non-binary genders.

Womxn, an alternative spelling of women, is seen as a break from patriarchal linguistic norms and aims to include trans women and some non-binary people.

Pushpak, a fashion and make-up enthusiast, has posted photos in the past wearing bright eyeshadow and kajal. He said:

“I haven’t been doing anything that is groundbreaking.”

“Indian men have always been wearing makeup for thousands of centuries. We were always here. We are still here. It is others who have refused to acknowledge it.”

Since the post was shared, it has taken the internet by storm. The picture has currently garnered over 4,500 shares and nearly 14,000 likes. 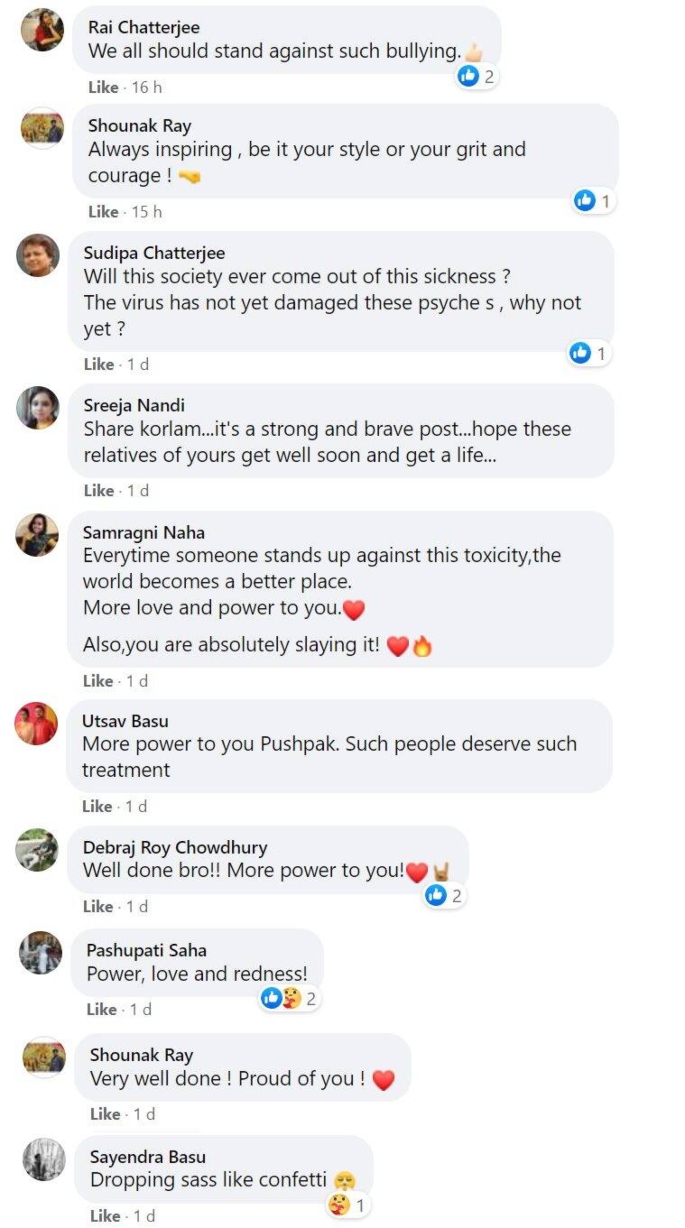 As his post is inspiring and empowering, several internet users commented saying: “This is beautiful.”

While one user wrote:

“Every time someone stands up against this toxicity, the world becomes a better place. More love and power to you.”

Another added: “There’s nothing else I want to say apart from I love you and thank you.”

Akanksha is a media graduate, currently pursuing a postgraduate in Journalism. Her passions include current affairs and trends, TV and films, as well as travelling. Her life motto is 'Better an oops than a what if'.
Public Display of Affection in India
The Stigma of Prostitution & Sex Work in Bangladesh