Public Display of Affection in India

DESIblitz explores the legality of Public Display of Affection in India and the abuse of power in numerous legal cases.

“Anything calculated to inflame the passions is "obscene".

The legality of Public Display of Affection [PDA] in India has been put to question because of the abuse of power in numerous legal cases.

India and its culture are reserved and hold specific values, morals and traditions which are expected to be upheld in society.

This is the primary reason why Public Display of Affection is seen and treated differently from the West.

Moral policing in public spaces is said to be a form of concern from society, for young women’s safety and innocence.

However, Public Display of Affection has become much more accepted in the past decade because of the strong influence of western culture in the country.

When it comes to legal matters, there is a penal code which can be used against PDA in India and cases are filed under a specific Indian Penal Code violation.

Public Display of Affection is mostly filed under Section 294 of the Indian Penal Code [IPC], which embodies:

Whoever, to the annoyance of others;

(a) Does any obscene act in any public place, or

(b) Sings, recites or utters any obscene song, ballad or words, in or near any public place, shall be punished with imprisonment of either description for a term which may extend to three months, or with fine, or with both.

Section 294 of the IPC supplements punishment if the criminal code is broken, although it does not determine what an obscene act would consist of.

Public Display of Affection becomes the concern of the state when PDA transforms into a ‘criminal offence’, which is performed publicly and disturbs the surrounding people.

Without the definite characterisation of ‘obscene acts’, the Indian police and lower courts might ‘misinterpret’ the section’s significance and abuse it. 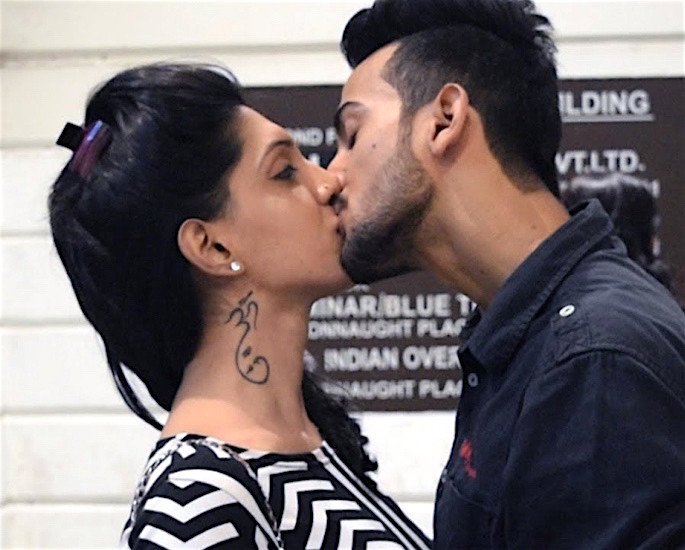 Article 19 – Legality of Kissing in Public

Article 19 is part of the Constitution of India. It ensures that all and only Indian citizens have the right to freedom of speech and expression.

Article 19 of The Constitution of India, 1949, states all citizens shall have the right to freedom of speech and expression.

“[…] law imposes reasonable restrictions on the exercise of the right conferred by the said sub-clause in the interests of […] decency or morality or in relation to contempt of court, defamation or incitement to an offence.”

Therefore, the Article which protects the rights of freedom of speech and expression declares and reassures the legality of kissing, as a form of expression.

It also entails that there are reasonable restrictions on the exercise of the right conferred (in this case, to the practice of anything related to PDA).

However, under Section 294, the definition of ‘obscene’ is not given, which implies that such an act [PDA] can arrive at a certain extent where it could cause annoyance to others.

There are a number of cases which demonstrate how Public Display of Affection is perceived in India.

Each one of these serves to show the way PDA has developed and the way it is viewed now.

In fact, the various disputes that took place in the past decade, all helped change the notion of PDA in India and therefore, they contributed to its acceptance.

The following are very important cases and articles, which have given an idea of how PDA was viewed and treated.

Zafar Ahmad Khan vs. The State – Definition of ‘Obscene’

In the case of Zafar Ahmad Khan vs. The State, in August 1962, the word ‘obscene’ was defined as:

“The word “obscene” though not defined in the Penal Code may be taken as meaning, offensive to chastity or modesty […] anything expressing or suggesting unchaste and lustful ideas, impure, indecent lewd.

“The idea as to what is deemed as obscene of course varies from age to age and from region to region dependent upon, particular social conditions. There cannot be an immutable standard of moral values. […]

“A book may be obscene although it contains but a single obscene passage. A picture of a woman in the nude is not per se obscene.

“For the purpose of deciding whether a picture is obscene or not, one has to consider to a great extent the surrounding circumstances, the pose, the posture, the suggestive element in the picture and the person in whose hands it is likely to fall.”

Therefore, the case presents a generalised definition of the word ‘obscene’.

Additionally, it highlights the importance of certain factors which are taken into consideration when ‘obscene’ is defined: age, area, morals and other social conditions.

It implies that this definition will keep altering and it is dependent on the values, morals and views of people in a particular society. Every time these factors change so does the definition of ‘obscene’. 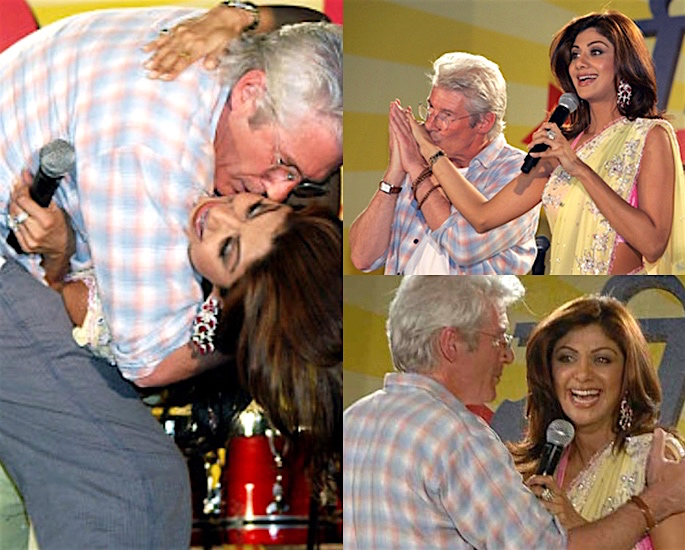 However, such abuses of Section 294 of the IPC have been present in various cases.

In 2007, Bollywood star Shilpa Shetty and Hollywood actor Richard Gere were charged with local sensibility offence through their misuse of PDA.

Judge Dinesh Gupta was quoted by the Press Trust of India, as he said:

“Gere and Shetty ‘transgressed all limits of vulgarity and have a tendency to corrupt the society’.”

Mr Bhagwagar (Shilpa’s spokesman) said in an interview: “Shilpa wishes that people would focus on the real issue, AIDS awareness, and not three pecks on her cheek”.

Obscenity Standards in these two famous cases imply that any act capable of corrupting one mind will always be categorised as an obscene act.

Therefore, when the value and meaning given to the word ‘obscene’ meets a certain subject, in the opinion of that particular person, that subject will be classified as obscene.

This means that any subject can be defined as ‘obscene’, with the right justification and belief.

In the case of S. Khushboo vs. Kanniammal & Anr, a survey was published.

Q1. Will you marry a person who had a relationship with others?*

Q2. Is it necessary to be a virgin until the time of marriage?*

*NB. The remaining percentage of people said, “do not know/cannot say.”

The case of S. Khushboo vs. Kanniammal & Anr notes that “notions of social morality are inherently subjective and the criminal law cannot be used as a means to unduly interfere with the domain of personal autonomy”.

Therefore, the survey implies a similar message mentioned in the case of Regina vs. Hicklin, 1869:

“Whether the tendency of the matter is to deprave and corrupt those whose minds are open to such immoral influences and into whose hands a publication of this sort may fall.”

From this case, an obscenity standard called the Hicklin Test was developed. S. Khushboo vs. Kanniammal & Anr has at its basis the definition of obscenity given by Alexander Cockburn in this English case.

This applies to Public Display of Affection because people have the nurtured knowledge of what they believe is obscene. It doesn’t necessarily mean such action has to be a cause of annoyance, or it is indecent.

It is because of the different nurtured beliefs, that PDA varies from area to area.

In fact, metropolitan areas tend to be more accepting of Public Display of Affections, whereas, in smaller towns and cities, PDA would be considered indecent, therefore, obscene.

In addition to the legality of kissing, the Supreme Court of India itself issued a verdict in response to Shilpa and Gere’s case, mentioned before.

With regards towards hugging and kissing in public, the Supreme Court declared that ‘no case can be made out’ of two people kissing or hugging each other, consensually.

In the case of Chandrakant Kalyandas Kakodar vs The State Of Maharashtra and Ors, the court observed that “standards of contemporary society in India are fast-changing”.

This is the reason why is “the concept of obscenity would differ from country to country depending on the standards of morals of contemporary society.”

Therefore, it should be kept in mind what the contemporary community standards are when ‘obscenity’ is evaluated. 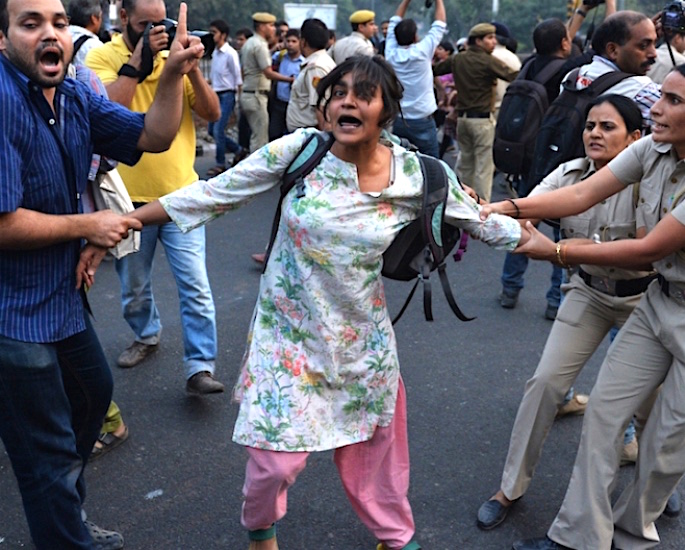 The Downtown Cafe in Kozhikode was vandalised by protesters of the Bharatiya Janata Yuva Morcha, which alleged that the customers of the café were engaging in ‘immoral activities.’

A Facebook page named The Kiss of Love was created by a group of friends, which were joined by numerous activists, including artists and painters.

Moreover, The Kiss of Love protest was set in motion after the videos were telecasted and became viral.

The protest began at Kochi, on November 2, 2014, when youths around Kerala decided to participate in this movement to express solidarity against moral policing.

To protest, the non-violent movement French kissed, hugged and held hands. However, there have been various attempts to prevent such events from happening.

Numerous religious and political groups, such as the Shiv Sena, claimed that under Section 294, Public Display of Affection was against the law and their culture.

Since these counter-protesters were armed and prepared to attack, they entered the protest venue in order to physically stop the activists from publicly kissing and hugging.

The Kerala Police charged more than a 100 Kiss of Love protesters and arrested 50 others who they claimed to have saved the protester’s lives.

As the protest grew in popularity on social and news media, the opposing groups managed to block the page of The Kiss of Love through mass reporting: they had 50,000 members.

After being reinstated, the page crossed the 75,000 members which did not stop posting pictures of them kissing and hugging.

From this protest, numerous other events have been created to support the movement against moral policing, including Kiss in the Streets, an event marred by violence towards the Shiv Sena.

In conclusion, Public Display of Affection in India is legal to a certain extent.

The consequences that follow the misuse of Public Display of Affection depend on the changes in the attitude of the Indian people towards PDA.

As much as India is a fast-changing country, there is still a long way to go before their people will be free to demonstrate their love without being humiliated, charged or even arrested.

Bangladesh Rape Crisis: Is the Death Penalty Working?
Son who stood up to Mother’s Slut-Shamers with Red Lipstick