The Bangladeshi government has introduced the death penalty to deal with its severe rape crisis. Find out why this law is controversial.

“Rape is an epidemic Bangladesh is failing to deal with”

The Bangladesh rape crisis began before the country’s creation. During the 10 month Bangladeshi Liberation War in 1971, a ‘systematic campaign of genocidal rape’ became the main feature of attack from Pakistan’s military.

This number is constantly rising, bringing the country to its knees in a state of emergency.

Before October 2020, the maximum punishment for rape was life imprisonment.

But after a string of persistent protests rippling throughout the country, the Bangladeshi government announced a drafted dramatic counter strike – the death penalty.

Previously, the death penalty was only permitted in cases where the victim died from injuries sustained in the attack. 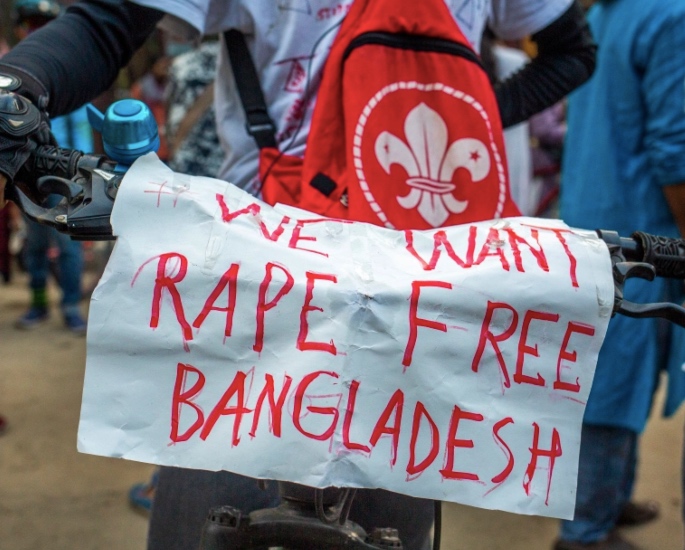 This alarming and sudden announcement struck people as a step in the wrong direction.

“This regressive step is a fig leaf that deflects attention from the lack of real action to address the appalling brutality faced by so many Bangladeshi women. Executions perpetuate violence, they don’t prevent it.

“Instead of seeking vengeance, the authorities must focus on ensuring justice for the victims of sexual violence – including through delivering the long-term changes that would stop this epidemic of violence and prevent it from recurring.

“That means, for example, ensuring that Bangladeshi women and girls are protected and that they feel safe coming forward and reporting crimes.

“Perpetrators must be prosecuted and held accountable, and the impunity for these horrific crimes must come to an end, but through fair proceedings and without resort to the death penalty.”

This statement was released one week after Amnesty International demanded justice after an online video showed a group of men severely beating a woman. It was explicated stated:

“The Bangladeshi authorities must immediately launch a thorough and impartial investigation and bring those responsible for this vicious attack to justice through fair trials without recourse to the death penalty.”

Meenakshi Ganguly is the South Asia Director of organisation ‘Human Rights Watch’. She believes capital punishment is not the answer for Bangladesh’s rape crisis, agreeing with Amnesty International. In a statement she says:

“Capital punishment is inherently inhumane and should be abolished, but because it is not a real solution to sexual violence.

“There is no conclusive evidence that it curbs any crime, including rape, and it could end up deterring reporting or even encouraging rapists to murder their victims to reduce the likelihood of arrest.

“Bringing in the death penalty is easy. What takes work – and is urgently needed – is to overhaul a justice system in which survivors are systematically ignored and maligned, and to ensure they have access to health services and legal support.

“Sexual assault crimes are underreported, but even when survivors take the brave step of reporting the crime, their cases are rarely properly investigated or prosecuted.

“In Bangladesh, the low conviction rate for rape gives rapists every reason to be confident that they will get away with their crimes.”

“We think the law minister’s statement is nothing but an eyewash and an extreme hoax. He talked about amending the law only to quell the intense movement protesting the violence against women and children across the country.”

But students of Dhaka University disagree.

“Rape has engulfed our society and state, and today no woman is safe from rape. Rapists are worse than animals and they don’t deserve mercy to live anymore.

“We thank the government for approving the amendment to the law and introducing the death penalty. We demand completion of all rape cases in the quickest possible time and handing down of punishment to rapists.”

But many students also want assurances that case numbers will drop as current legal processes do not work. 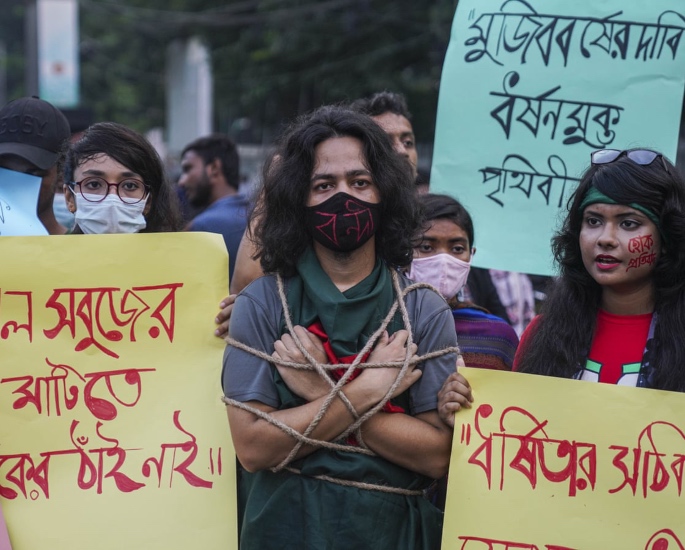 However, because of the amassed number of cases yet appallingly low convictions, people have demanded stricter enforcements, calling for capital punishment.

The students were accompanied by people from all backgrounds, clutching onto signpost slogans: “Boycott the Rapist” and “Zero Tolerance towards Rape.”

These intense protests perhaps prompted the controversial amendment of capital punishment to the Women and Children’s Repression Prevention Act 2000.

This was after the country was shocked into seeing a 37-year-old housewife stripped and beaten in a viral video over social media.

In another case, a Pakistani woman was raped by a Bangladeshi man after a rejected marriage proposal. Another case centres on a man of religion abusing his students.

Last week, another woman was gang-raped in a hostel in Sylhet’s northern district.

Rape is an epidemic Bangladesh are failing to deal with.

A legal aid and Human rights organisation, ‘Ain O Salish Kendra’ (ASK) have documented 975 women violently raped in Bangladesh between January and September 2020. Over 200 of these cases were gang rape.

Three people died from injuries sustained and 12 people have committed suicide after being raped.

Countless rape cases go unreported as many women are ashamed the stigma being raped brings upon themselves and their families. Some children who are victims of rape are seen as ‘unpure’ and forced into marriages.

In 2016, the BBC covered a story on Purnima Shil, a Bangladeshi rape survivor who now is a victim of stigma and shame.

12 years after she had been gang-raped in Bangladesh, a Facebook page was created in her name. The page included her photograph and phone number.

The Dhaka Tribune released an article exposing stigma, shedding light onto the reasons why many rape cases go unreported. These cover taboo topics like familial sexual assault coupled with the unrelenting side of South Asian culture.

But also discusses financial reasons, how lengthy legal processes cost time and money. The victim is also publicised, opening up the possibility of stigma from her community.

The conviction rate is disgusting. 88% of rural and 95% of urban Bangladeshi men who admitted to committing rape said they faced no legal repercussions, according to a 2013 UN multi country survey.

What Can Be Done 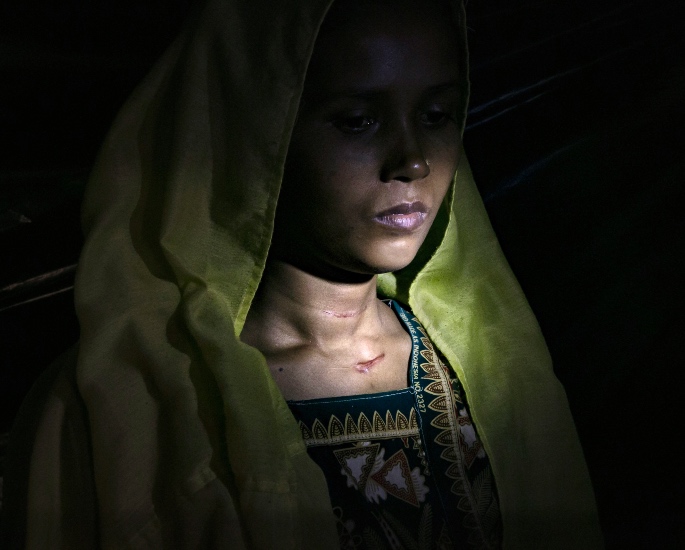 Women are often shamed by police officers, not believed, not treated with respect then face a fear society will stigmatise, ruin and humiliate them and their families.

There is a heartfelt call for change and justice for people brutalised by the legal system, by their rapists and by society.

People in Bangladesh are split by the controversial decision to enforce the death penalty as the highest form of punishment for the horrific act of rape.

When all actions are failing, and fear is the only card left, many people agree with enforcing capital punishment. But it is also seen as inhumane, and something which will not help.

People are worried about enforcing capital punishment acts as a smokescreen to deny what people really need. A working legal system.

In 2019, the Dhaka Tribune released an informative article on sex education in Bangladesh. In short, there is none.

There is a cry for education surrounding sexual violence and awareness. A growing need to change perceptions on the treatment of women in the country and an understanding from the government to admit there is a crisis.

The Bangladesh rape crisis is ongoing, ruthless and subject to taboo. It holds many issues, like the lack of education surrounding rape, the idea of cultural cold-heartedness and an ill-equipped legal system. But everyone agrees something needs to be done.

If you have been affected by any of the issues in this article, please contact the following:

Hiyah is a film addict who writes in between the breaks. She sees the world through paper planes and got her motto through a friend. It’s “What's meant for you, won’t pass you.”
Truth Project reveals Lathika’s Child Sexual Abuse Experience
Public Display of Affection in India