Son of Sardar cleared by Sikhs

‘Son of Sardar’ the film by Ajay Devgn has attracted complaints from Sikh leaders prior to its release for Diwali 2012 for derogative content towards Sikhs.

Karnail Singh complained about the the 'anti-Sikh' dialogues

Family comedy ‘Son of Sardar’ is set for a Diwali 2012 release, however, superstar Ajay Devgn, recently flew to Amritsar, to meet with the representatives of the Shiromani Gurdwara Parbandhak Committee (SGPC) and All Indian Sikh Students Federation (AISSF), over concerns of objectionable content in the film.

Punjab Revenue Minister Mr Bikram Singh Majithia was present at the meeting, along with a five member committee of SGPC and complainant, AISSF president, Karnail Singh Peer Mohammad in a local hotel.

During the meeting all members present watched the YouTube promo of the film. The board were unhappy that Ajay Devgan did not respond to the 7 day notice sent to him on the 16th of August 2012.

The AISSF president felt that Ajay Devgn had made ‘blasphemous’ remarks against Sikhs. Karnail Singh complained about the the ‘anti-Sikh’ dialogues to the Akal Takht, the highest temporal seat of Sikh religion and the SGPC. 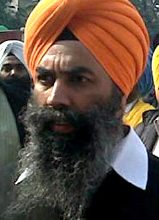 Karnail Singh stated that the film shows Sikhs as the object for making jokes and promoters of abusive language, presenting a bad image of Sikhs.

After the meeting Ajay Devgn held a press conference and announced that there has never been any intention to insult the Punjabi or Sikh community when in fact the film is to show them in a good light. Ajay Devgan also said they he is a Punjabi and if anything in the film is hurting the community, then he is hurting his own family.

“The film is a magnanimous effort to showcase the community in the most positive light, proudly highlighting their strengths. I am a Punjabi and I cannot even think of hurting the people’s sentiments as it would be like hurting my own family and my own culture and tradition. I have cleared the objections and explained everything about the film and the context of the portions about which there were objections.” said Devgn.

Ajay claimed that while making the film, great care was taken to ensure proper tying of the turban by the Sikh characters. “A person was flown about 20 times from Amritsar for the purpose,” he added.

Devgn confirmed that from the promos the points on which objections were raised would be completely removed in the final release of the movie. However, regarding the promos already released on YouTube for the film, he had no control.

Ajay Devgn also said that whilst the film was shooting he would hire a Turban expert to watch the shootings of the film so they do not offend any of the community. Mr. Majithia praised the superstar for showing tremendous sensitivity and flying down from Hyderabad to Amritsar to personally speak to the committee.

Here is the official trailer to the film:

There are notions that the SGPC committee though constituted at the directions of Akal Takht, clearly appeared to be secondary in presence compared to revenue minister Bikram Singh Majithia on the issue of the movie.

Since Majithia mainly addressed the press conference along with Devgn, further to being assigned to do the job by the request of Punjab deputy chief minister Sukhbir Badal (who was contacted by actor Sanjay Dutt, an old school mate of Sukhbir’s), many wonder why more of the SGPC committee were not more prevalent at the meeting. 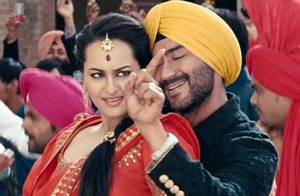 Majithia got irritated when questioned about this and said that he had done the job for amity and no controversy should be created on the issue. “My job was to mediate. I am Public Relations minister of Punjab and MLA from district Amritsar. I have arranged a meeting as it was my duty to ensure peace and I am happy that both the sides came.”

Pleased with the outcome of the meeting, Ajay Devgn said:

“Now all the objections have been addressed and Devgn deserves all praise for that. I am sure it will be a good movie which every Punjabi would watch.”

Complainant Peer Mohammad too said that he was pleased with Devgn’s explanations and assurances regarding the film. The film can now have a clean release for Diwali.

Starring Ajay Devgn, Sonakshi Sinha, Juhi Chawla and Sanjay Dutt in the lead, the film is a remake of the tamil film “Maryada Ramanna”, which was a huge success in 2010. The music of the film has been composed by Himesh Reshamiya and Sajid – Wajid. Salman Khan is set to make a special cameo appearance in this film. ‘Son Of Sardaar’ releases on Diwali day, 13th November 2012.

Amit enjoys creative challenges and uses writing as a tool for revelation. He has major interest in news, current affairs, trends and cinema. He likes the quote: "Nothing in fine print is ever good news."
Ek Tha Tiger roars for Salman Khan making it a Big Hit
Ranbir Kapoor as fun and dumb Barfi!