Directed by Anurag Basu, Barfi! is an unusual film for Bollywood. Ranbir Kapoor plays Barfi who is deaf and dumb prankster, DESIblitz met up with Ranbir Kapoor to find out more about Barfi!

"I had to express myself with my body language"

Ranbir Kapoor plays Barfi in a role that has given him much joy as a character who is deaf and dumb but lots of fun. The Bollywood film Barfi, a UTV Motion Picture, is Ranbir Kapoor’s eleventh release since his debut, Saawariya, in 2007.

DESIblitz met up with Ranbir Kapoor in London to talk to him about his character and why he feels the film is one of the finest films of his career.

For Ranbir, Barfi is a different transition from the successful film Rockstar, which was directed by Imtiaz Ali (Jab We Met and Love Aaj Kal) which earned him the Best Actor award across all award functions. 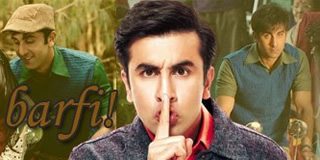 Ranbir told us Anurag Basu had an engaging story to tell and he was a child at heart, and they had a marriage of thought, which was why he is proud of collaborating together.

The story involves three characters with Barfi being the focal point of a different kind of love triangle. His parents named him Murphy, but everyone calls him Barfi! Always ready with a prank up his sleeve, he’s quite the charmer, especially with the ladies. In Darjeeling, Barfi is the talk of the town, even though he can neither speak nor listen. His bittersweet relationship with two, beautiful young ladies, Shruti (Ileana D’Cruz) and Jhilmil (Priyanka Chopra), triggers a chain of reaction of events that turn his life upside down.

Ranbir explained that his character is a “carefree, and happy go lucky, good for nothing guy.” When asked about whether a lot of research went into his character Ranbir told us as an actor you always need to do your homework before shooting. “However, once the shooting started I had to forget all of that, so the character is relatable to people who do not know sign language, so I had to express myself with my body language.” 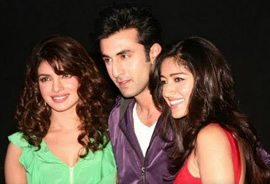 When asked about how it was like to work with two stunning leading ladies, Ranbir told Desiblitz, “Priyanka Chopra’s character was such a huge contrast to the character she played when they were last on screen together in Anjana Anjani, and it was a tricky character to play, but she surrendered to the part amazingly and played it very well.”

He said, Illeana D’Cruz, who is popular in South Indian films, brings a lot of dignity and beauty to her character, even though it is her first Bollywood film, she is amazing. He expressed how proud he really was to be working with these leading ladies.

Barfi’s audiences are invited to witness his amusing, naughty and sometimes crazy antics – a heart-warming tale of selfless love and about finding happiness in the smallest things in life; that tells you no matter how tough your life may be, “Don’t Worry. Be Barfi!”

The challenge of having no dialogues in the film – easy or not? we asked Ranbir: “It was great to come on set and have no dialogues, I just went on set, had fun and played dumb charades, look at the scene and have fun while doing it.”

Talking about the comedic aspects of the role, Ranbir added:

“The character reminded me of some my favourite characters, Charlie Chaplin and Mr Bean, and I had a great time just letting go on set and having fun with the character.” 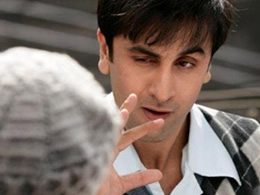 The music for the film by Pritam has attracted a lot of positive reviews. The title song of Barfi features the vocals of the enriching Mohit Chauhan, who also sang all of Ranbir Kapoor’s songs in the smash hit Rockstar.

When asked whether having the same singer helps a star’s image, such as he uses Mohit Chauhan, Ranbir said: “I am just lucky to have Mohit Chauhan to add to my filmography, and the kind of films I am doing, Mohit added a lot in Rockstar and in Barfi. I hope he continues singing for me, because yes a singer does contribute to an actors life, and we don’t really give them much credit, and I definitely hope I can have this partnership with Mohit.”

Whilst in the UK promoting Barfi! Ranbir Kapoor emulated his fans in an entertaining and loving manner, which has to be one of the most entertaining meets and greets ever!

UTV Motion Pictures releases Barfi in the UK and worldwide on the 14th September 2012.

Priyal has a huge passion for Bollywood. He adores attending exclusive Bollywood events, being on the sets of films, presenting, interviewing and writing about films. His motto is “If you think negative then negative things will happen to you but if you think positive then you can overcome anything.”
Son of Sardar cleared by Sikhs
Priyanka Chopra launches Singing Career