At the 81st Oscars award ceremony held on the 22nd February 2009 at the Kodak Theatre in Hollywood, USA, Slumdog Millionaire won an amazing 8 Oscars. The Academy Award (Oscar), is the main national film award in the USA and recognised around the globe as one of the most prestigious awards to receive for film […]

At the 81st Oscars award ceremony held on the 22nd February 2009 at the Kodak Theatre in Hollywood, USA, Slumdog Millionaire won an amazing 8 Oscars. The Academy Award (Oscar), is the main national film award in the USA and recognised around the globe as one of the most prestigious awards to receive for film work.

Slumdog Millionaire the story of a slum dwelling Indian boy who wins millions in the Indian version of the game show ‘Who Wants To Be A Millionaire?’ made hallmark history for Bollywood, Indian and British cinema, film music and actors from Bollywood and the UK.

The Oscar depicts a knight, holding a crusader’s sword, standing on a reel of film. The film reel features five spokes, signifying the five original branches of the Academy – the actors, directors, producers, technicians and writers. The Oscar statuette has been designed by Cedric Gibbons and sculpted by Los Angeles artist George Stanley. Each statuette is made from the alloy britannium and is then plated in copper, nickel silver, and finally, 24-karat gold and is manufactured by R.S. Owens and Company in Chicago. It stands 13.5 inches tall and weighs 8.5 pounds.

Since the initial awards banquet on May 16, 1929, in the Hollywood Roosevelt Hotel’s Blossom Room, over 2,700 Oscar statuettes have been presented. 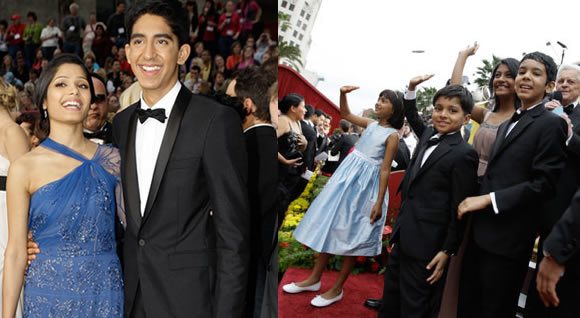 The Oscar nominations that Slumdog Millionaire triumphed in were as follows.

In front of some of the most famous stars of Hollywood, the Slumdog Millionaire team picked up it’s awards across a spectrum of nominations. From best sound mixing to best director to best film, this less than £10 million budget film wiped the Oscar awards floor.  Making it one of the most memorable movies ever produced in a cross-cultural and Indo-Brit manner.

History was especially made by A R Rahman, being the first Indian to win two Oscars. For the best original song award, A. R. Rahman himself performed on the Oscar stage with vibrant dancers and the orchestra, doing a version of the nominated song Jai Ho. He said in his award speech, “All my life, I’ve had a choice of hate and love. I chose love, and I’m here.”

Resul Pookutty also created history by becoming the first Indian to win an Oscar for sound mixing. Pookutty shared the award with Ian Tapp and Richard Pryke for their work on the film.

It was excellent to see on the red carpet,at the ceremony and collecting the Best Film award, the real stars who made this film unique and a delight to watch – the young child actors from India. They were very excited to be there and totally taken back by the whole experience from the flight to actually being present at the awards event. Very very different from how they spend their daily lives in the real slums of Mumbai.

So, this shows that a low-budget film like Slumdog Millionaire can make it to the creme-de-la-creme of film awards and win. There has been no other film like this out of India that has suddenly boomed and won so many top recognisable industry awards in such a short space of time. It challenged and won against big Hollywood films like ‘The Curious Case of Benjiman Button’ starring Brad Pitt and ‘Milk’ starring Shaun Penn.

In India, the reaction of the Bollywood film fraternity and some facets of Mumbai towards the film has been mixed. Some are not in favour of such a realistic movie about India, others are full of envy for such a project making it so big, and those that who are hugely proud to see their own actors and music director conquer this huge platform for movies and surpass some of the biggest Hollywood names.

Bollywood actor, Anil Kapoor said at the awards, “we are very proud to be associated with this film because it’s an Indian story, Indian faces and it’s created a kind of impact no other film has created in the last decade.”

The movie nearly never made it to the cinema screen and was going to get released straight onto DVD. Danny Boyle revealed that it would’ve been easier for Warner Brothers to release it on DVD but they decided to show it to Fox Searchlight, who stepped in to release it on the big screen. Probably one of the most incredible decisions ever made for all involved. Because in the UK alone, the movie has grossed over £21 million since its release.

In Hollywood and Bollywood, the buzz of Slumdog Millionaire will make big news for everyone and will surely now open the doors for more collaborations and films to be made between the two sides of the globe. Opening up opportunities for actors from both industries.

Checkout the slideshow of the grand Oscar winning night. Use the arrows to navigate through the photos and click the [O] button to enjoy the gallery in full screen mode.

Thanks to Danny Boyle, his team, crew, cast and all involved in the project, Slumdog Millionaire, the film, has become a millionaire in its own right.