Jodhaa Akbar triumphs at the Bollywood awards event equivalent of the Hollywood Oscars in Mumbai.

The 54th Idea Filmfare Awards for Bollywood movies released in 2008 took place at the renowned Yash Raj Studios, in Andheri, Mumbai, India, on the warm evening of 28th February 2009.

The evening started with a rendition of the national anthem and things kicked into a rocking mood with Farhan Akhtar performing the popular Laundry song from his movie Rock On! 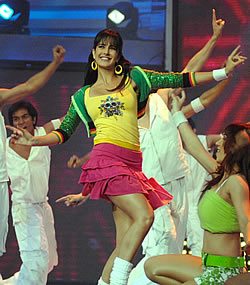 Shahid Kapoor performed on stage to his popular tunes which included Mauja hi Mauja, Nagada Baja from Jab We Met and Aai Pappi. Abhishek Bachchan performed some great moves on stage making the night special. Katrina Kaif the long legged Bollywood beauty performed sporty and vibrant songs on stage, and especially stepped in for Priyanka Chopra’s numbers  due to Priyanka hurting her leg prior to the show.

Deepika and Konkona invited Shahrukh Khan on stage, who wore a sling supporting his left shoulder further to his recent shoulder operation. He talked about India’s great win at the Oscars by Slumdog Millionaire. In particular, A.R. Rahman and Resul Pokutty’s achievements and subsequently, honoured the entire Slumdog Millionaire team.

Here is the final list of the winners of the 54th Idea Filmfare Awards 2009.

Jodhaa Akbar notably bagged five awards on the night including Best Actor for Hrithik Roshan and beat Ghajini and Rab Ne Bana Di Jodi which were favourites for Best Film. A.R. Rahman again swept clean the music categories making it an amazing year for the music maestro after recently winning at the Hollywood Oscars for Slumdog Millionaire. Rahman said, “I’m grateful for the unconditional love that Bollywood has given me. I had never expected so much love.”

A special award was introduced by the main hosts Ranbir and Imraan, called the Blush Award. The nominations for the category were Rekha, Katrina Kaif ,Preity Zinta, Priyanka Chopra, Shreya Saran and Abhishek Bachchan. The guys chose Rekha as the ideal person to receive the deserved award.