Kylie appears in her first Bollywood movie which is a dream come true for the Aussie pop star.

Kylie Minogue has stepped into the arena of Bollywood movies with a debut appearance in the film, Blue. She stars with Akshay Kumar, Sanjay Dutt, Zayed Khan, Lara Dutta and Katrina Kaif in this underwater thriller inspired by the Hollywood film The Deep. The film also has special appearances by Sunil Shetty, Amrita Arora, Salman Khan, Vidya Balan, Ajay Devgan and Nana Patekar.

The film is the most expensive Bollywood flick to date. The estimated budget of the film is of Rs.129 crores (approx $25 million). The story based on lost treasure which 3 friends try to find. It is all about the the obstacles they face in the process and the deceit and betrayal among themselves and others. The release date for the movie is pencilled in for June 2009.

Originally, it was thought that Kylie was going to primarily do item numbers for the film but this is not the case. Anthony D’Souza who is the débutante director of the film said, “At a particular juncture in the story we needed a woman with a particular personality and appearance who could act, sing and dance. Kylie fitted the bill. She isn’t here to do an item song and go back. Kylie plays a pivotal part. She contributes considerably to taking the story forward. Over a period of eight days, I’m shooting all of Kylie’s scenes.”

Minogue has been spending time with Akshay Kumar ahead of the eight day shooting schedule in which they will be performing a dance routine together for the music video to the film. As host, Akshay invited Kylie to his home. He has even been cooking for the sexy Aussie star. He said that he cooked her a typical rich Punjabi meal which she enjoyed despite the spices! Also, Kylie was keen to see a wedding, so Akshay took her to a wedding of a close friend, where apparently, she was kept quite close to Akshay and any photos taken with her were not with any actor but him.

Kylie has recorded two songs for the film with Oscar winning music director A.R. Rahman. It’s reported that for Kylie Minogue has charged producers approximately $1 million for her to be featured as a singer in the movie.  She told a news conference, “I met A.R. Rahman at the BAFTA (British Academy of Film and Television Arts) awards (in London last month). I couldn’t believe I was doing a song with him in Bollywood so soon after.”

Of the two songs for the project, one is a solo for the promotional video of the movie and the second a duet with Sonu Nigam.

Kylie recorded her part of the duet in her London studio, while Sonu Nigam recorded his in Mumbai. Sonu’s tracks were sent to London, which Kylie used to complete her part in the recordings. 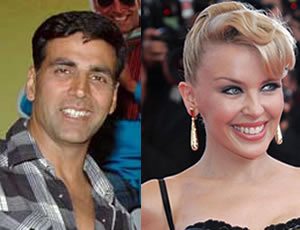 Interestingly, she was not the first choice for A.R. Rahman who had approached Madonna and RnB star Rihanna for the songs. Madonna was unavailable due to her divorce and Rihanna was demanding too much money.

Since Kylie is part of the female cast in the movie, it’s been reported that the other two stars have been quite anxious to see how Kylie will performing for her more significant role in the movie.

For one of Kylie’s song scenes with Akshay, it is to be a dance sequence in a nightclub setting and the dress has been designed by India’s leading fashion designer, Manish Malhotra on the recommendation of Farah Khan who is choreographing the scene. Manish said,  “It was thanks to Farah (who is choreographing  the song on Kylie Minogue, Akshay Kumar, Lara Dutta and Zayed Khan) that I got to design Kylie’s dress. It’s a very glamorous and sexy dress.”

In addition, Narendra Kumar, Indian fashion designer responsible for the clothes in the contemporary Priyanka Chopra movie, Fashion, has also been recruited to dress Kylie in the shoots of the songs. He said that one of the dresses had to be produced within a day, after getting final approval from Kylie. He said she was a joy to dress because of her huge sex appeal and co-operation to look good in the film. Also, he has a cameo role in the Kylie song too.

Watch the video of the ‘Blue’ press conference in Mumbai, India. 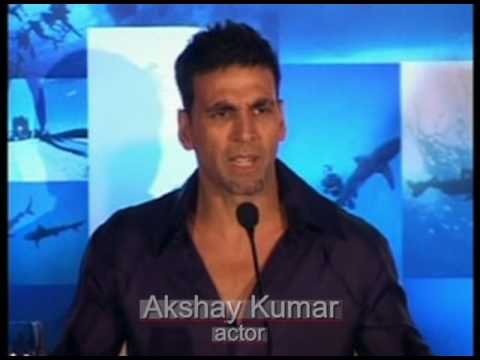 Akshay Kumar is at the forefront of  Bollywood films showing integration with global stars. Further to the massive success of his collaboration with US star Snoop Dogg in Singh is Kinng.

So, it seems that Bollywood is beginning to open its doors up more and more to non-Bollywod stars with the aim to expand the reach of Bollywood to wider audiences worldwide. After the huge success of Slumdog Millionaire, there is no doubt that it makes both commercial and social sense. Kylie is a huge popstar worldwide and fans everywhere will certainly want to see the outcome of her Bollywood Blue appearance.

Baldev enjoys sports, reading and meeting people of interest. In between his social life he loves to write. He quotes Groucho Marx - "The two most engaging powers of an author are to make new things familiar, and familiar things new."
54th Filmfare Awards 2009 Winners
Bollywood Film Aloo Chaat in Toronto